Non-astrological Thoughts On The Hunger Games 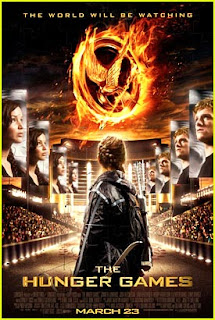 Feeling a tad bored last Sunday I persuaded the husband we should go see The Hunger Games. We weren't particularly keen to see the movie, but the rest of the bill seemed even less attractive. Target audience of The Hunger Games is "young adults" - probably 14-ish to 19-ish or a bit older; these days 20-somethings don't seem nearly as mature as they did in days gone by. We're way out of sight of the target demographic, but we're both sci-fi fans and hoped that this element of the movie would be worth a look, keeping in mind that the story, adapted from the first book of a trilogy by Suzanne Collins, isn't meant for oldies such as we. Oldies have been there, seen that etc. and have tried to understand many things over many decades. 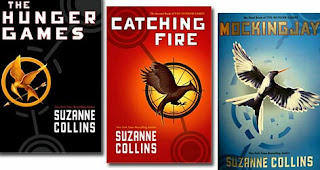 The movie, and books, are meant mainly for "clean slates", who, though brought up with TV, internet and violent video games haven't really endured much in the way of real adult strife, though teenagers do tend to see their own versions of life obstacles everywhere - in school, in college, at home.

At the end of the show my first words were - "Well, better than I expected - I wasn't bored!" Response, as we stumbled about in the half light, last of the handful of people attending an afternoon screening, "Hmmmm....erm...." Later husband said he'd felt somehow uneasy throughout, realising that the ending could only be sad and ugly - also, he'd thought that if technological progress had reached the level depicted in some of the story's themes, how come life had descended to such an horrendous level for so many? There was too much of a disconnect. Human nature wouldn't allow that, rulers need to enjoy at least some praise from the masses. I didn't agree.

A little more background as to how the extremely nasty idea of holding Hunger Games, where 24 children aged between 12 and 18 must fight each other to the death, had arisen might have helped in understanding the whys and wherefores of it all. This background was absent, apart from some quick explanatory text at the start of the film. I understand that more detail will follow in the sequel(s) - three of these are planned.

A wild guess at a date in our future when the story's events could be set: I think we'd have to look at a time beyond 200 to 300 years hence. The Games have been held annually for 74 years when the story begins. They originated after a rebellion against ruling classes who had set themselves up to oversee what remained of North America, following a series of disasters, natural and war-driven. A people's rebellion was put down. Annual Hunger Games were created as a punishment, so the people of Panem would never forget the result of rebelling against authority.

North America's new name is Panem (from "panem et circenses" = bread and circuses). The country, or what was left of it, was divided into 13 Districts each with its own raison d'etre: agriculture, animal farming, coal mining, engineering, lumber/paper, etc etc. Some districts were easier to live in and rather more desirable than others. Katniss, the film's young heroine, comes from District 12, one of the poorest of all. She and a male companion are chosen or volunteer to fight for their lives as "tributes" in the 74th Hunger Games, along with 22 others, 2 from each District.

District 13 was originally responsible for the Rebellion and thereafter destroyed, leaving only 12 Districts. Our movie theatre had a big map in the foyer, based on the one below, showing the Districts. Our part of Oklahoma is shown as being underwater! This map shows only the USA-as-was, not the rest of North America, but online there are other overall versions of the map - see here. Wikipedia's page The Hunger Games universe explains each district. 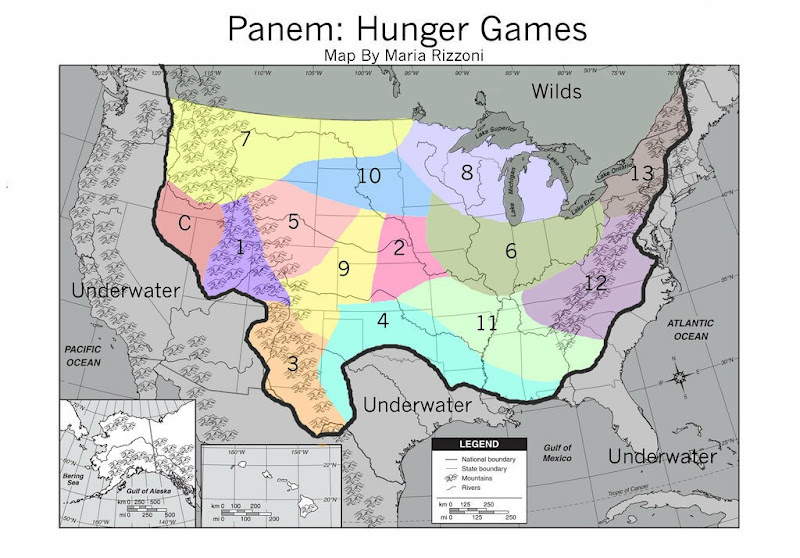 The Hunger Games serve as both punishment of the Districts and entertainment for the elite in The Capitol, who watch on screens, gamble and manipulate via advanced technological doo-dads which I haven't yet got my head around.....some of this made no sense to a semi-thinking adult! A fun - nay ridiculous - part of the movie for me was the way the weathy, spoiled inhabitants of The Capitol were depicted. These people would be the future equivalent of what we now call "the 1%". 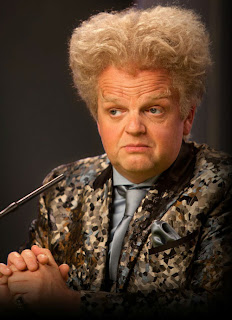 Costume designers must have had an overdose of early 18th century French rococo farce - or too much Lady Gaga! Capitol men have names culled from days of the Roman Empire: Claudius Templesmith announcer at The Games (Toby Jones - see right), and Seneca Crane for expample. Below is Katniss (Jennifer Lawrence) with Effie Trinket (Elizabeth Banks), who acts as official escort to the young "tributes" once they've been appointed. 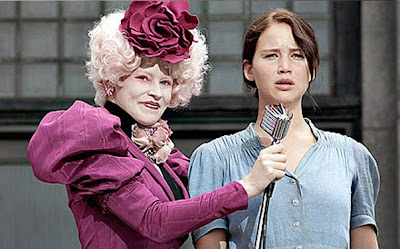 Some details in the movie's theme originate in today's reality TV shows: mentors, stylists to provide make-overs, manipulation by those running the show/Games; playing for sponsorship/ votes by using sad backstories; an urge for celebrity. Other ideas hark back to mythology and ancient history: token sacrifice & gladiators for instance - mans' inhumanity to man.

Below: my own favourite character from Hunger Games Haymitch Abernathy (Woody Harrelson), the only prior Hunger Games victor from District 12 still living. He now resides in The Capitol, acts as mentor to the young "tributes". He drinks a lot, but his shrewdness and cunning are instrumental to the story's outcome. 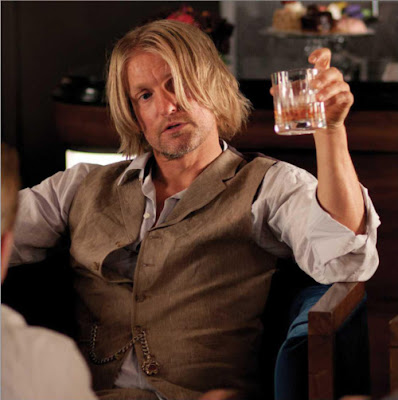 During the movie I thought more than once about a recent post of mine Humans: Risen Apes of Planet Earth. The irony of our sitting in a theatre watching this spectacle didn't escape me either. That said, it was a thought provoking film and can perhaps can be seen as a warning signal about much that passes for entertainment nowadays, as well as being a vehicle to present a basic theme of ugly oppression to young minds in an accessible way.

The Hunger Games has elements of allegory - possibly not picked up by younger viewers; fantasy, which youngsters adore; and a background of dystopian USA, which some of us could well imagine without much coaxing. Love rather than sex is emphasised, and that can only be a good thing in my view. Violence is ever-present, in sanitised form, no close-ups of severed limbs, lots of wobbly camera work to blur and distract, no horrendously sickening sights of how starving people actually look. The people of the story's Districts are said to be near starvation, but all looked fairly robust to us, including the movie's heroine Katniss. This was possibly a direct intention, considering the target audience.

As in all decent movies, and books, aimed at a certain demographic, there are deeper layers waiting to be discerned by a different demographic. This is definitely the case in The Hunger Games.
Posted by Twilight at Saturday, April 28, 2012

Very much the case and there is good reason - adult pursuits forced on them with no adult values attached or imparted by parents. Plus political infantilization.

James Higham ~~ Maybe so - reasons must be complex and varied, different for each individual; but what you say is likely true for many.