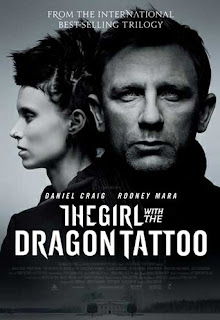 We watched The Girl with the Dragon Tattoo on DVD during the week. Neither of us had read the book, the first of a trilogy by the late Swedish author and journalist Stieg Larsson. I recalled, though, that my husband's daughter had told us how much she had enjoyed all three novels; so we opted to rent the DVD, rather than going to the cinema to see The Hunger Games. As it happens, both movies have a young woman as hero (can't use heroine here as it sounds too prissy for these two go-get-em females!)

The Dragon Tattoo movie, a "thriller" set mainly on a Swedish island, was directed by David Fincher, female lead is Rooney Mara, co-star Daniel Craig lately star of the James Bond series. (Trailer at end of this post.)

It's good that there's one mature co-star, it gives us oldies a character to which we can more easily relate - and possibly have more chance of drooling over? As it turned out Daniel Craig's role as Mikael Blomkvist, publisher of the Swedish political magazine Millennium and something of an investigative journalist, doesn't allow for a lot of drool-worthy characterisation this time. He remained fairly subdued throughout, but provides a wonderful foil for Rooney Mara's superb portrayal of manic swash-buckling Lisbeth Salander, (21st century version of swashing the buckle, of course: world-class hacker, bisexual, martial arts expert, photographic memory) possibly the weirdest character, outside of animation, to be encountered in a movie for quite some time.

We enjoyed Dragon Tattoo, in spite of some really, really nasty sexually violent scenes, about which I'll not elaborate here.

I'm interested to have a quick peek at Rooney Mara's & Daniel Craig's natal charts, as well as that of David Fincher, the film's director. There they all are in the photograph below somewhere in Europe promoting the movie - 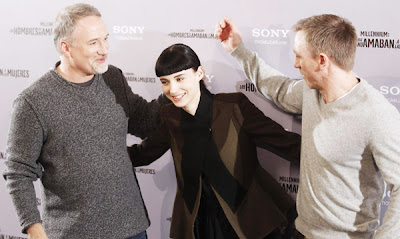 Rooney Mara born 17 April 1985, Bedford, New York. No time of birth available so a look at a 12 noon version of her natal chart must suffice. 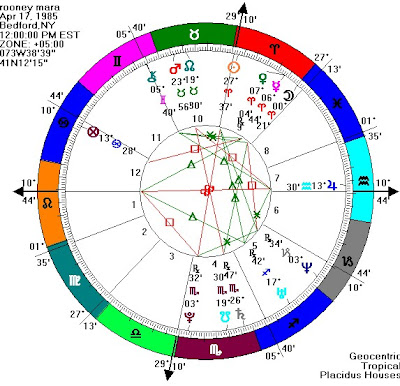 Ms Mara was born with the right astro-stuff to play this role: Sun and perhaps Moon in Aries (can't know about Moon without time of birth)- Aries ruled by Mars, the fighter.

Expansive Jupiter in mentally-driven Aquarius in harmonious sextile to Aquarius's ruler Uranus (the eccentric and unexpected) in Sagittarius (which Jupiter rules) is a good aspect in itself in relation to a actress playing this role. Additionally, these planets are in what astrologers call 'mutual reception' i.e. they have an even improved rapport, beyond the sextile - there is a reinforcing of the characteristics of each planet/sign.


Daniel Craig born 2 March (some websites have 11 November??) 1968 Chester, UK - 12 noon again, as no birth time is known. Craig is said to be a very private person, so I'd not wish to intrude by going into much detail here. Just a quick glance at the 2 March version - which is likely to be correct unless Mr Craig is unusually paranoid about it, by even allowing a birthday celebration to proceed in March if it wasn't really his birthday (that would, anyway, actually link to Scorpio!)

I'm dealing only with the way the 2 March astrology relates to his part in this movie.

There's an Aquarius link between the co-stars: MR has Jupiter at 13 Aquarius DC has Venus at 13 Aquarius - and a slightly less close Aries link MR has Venus/Mercury at 6and 7 Aries, DC has Mars and Saturn at 10 and 11 Aries. These links in their real-life astro-natures would have been helpful in honing an ability to produce the on-screen rather peculiar yet palpable chemistry between the two disparate characters. 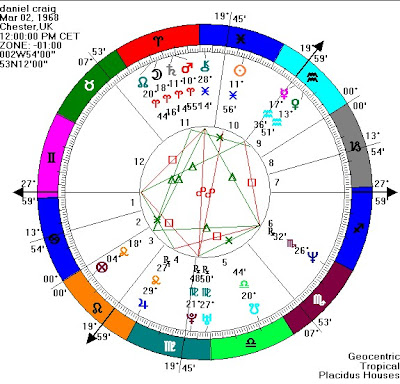 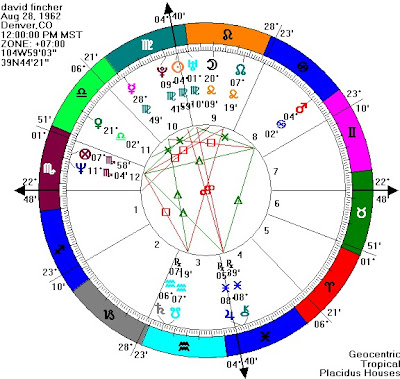 A quote about Fincher from one of the pieces linked below:

He's a master of the meticulous -- famous for his obsessive research and endless takes, sometimes 50 or more per set-up; even so, he shrugs, "At best you get 60% of what you want."

Look at his Sun (self) flanked by Pluto (darkness) and Uranus (the eccentric and unexpected! Those are words which describe elements in many of his films:
Seven, The Game, Fight Club , Panic Room , Zodiac, and this current one. Mustn't forget The Curious Case of Benjamin Button - a Uranian-driven movie if ever I saw one!

Note this Yod (Finger of Fate) linking a sextile between that Sun/Pluto/Uranus cluster and Mars in Cancer by two 150* quincunx aspects to Saturn in Aquarius.

Astrologer Kim Falconer describes a Yod at her website, she summarises thus:
"the Yod means that three, or more, of your planets are in dialog with each other and it's up to the pointing planet to harmonize the energy. It's called the finger of fate or God because for most people this is a default".

Saturn connects to career and professional interests, so at the apex of this Yod Saturn could be said to be drawing the characteristics of the 4 planets from the sextile together through his work. 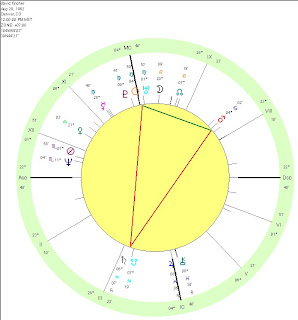 Deliberately didn't see the movie, T, as I adored the trilogy and want my imagination to stay with what I hold in my head!
I hear the Swedish movies are superior to the Hollywood version, can't cite my reference and have seen no others.
I found the Elisabeth character one of the most complex characters ever defined in a novel. And by a male too.
Glad you enjoyed your movie experience!
XO
WWW

Wisewebwoman ~ I can understand how you feel about this WWW.

I tend to do the reverse thing these days - see a movie then read the book (sometimes). I've just read The Handmaid's Tale having been inspired to do so by the DVD we saw. It worked well for me - in this instance anyway.

The first book is great, the second two I did not like as much. I liked both versions of the film. In the new ones, some very sick humor, esp the use of Enya's Orinoco Flow :)

Juno ~~ I don't think we shall seek ou a DVD of the original movie, the Swedish version. We enjoyed the tale but not THAT much! ;-)

I didn't notice Orinoco Flow or much in the way of humour (or if I did it didn't register). I was probably too intent on not losing any thread of the plot.