A Quintuple-Aries Poet, Prone to Excesses and Urges to Shock: Algernon Charles Swinburne 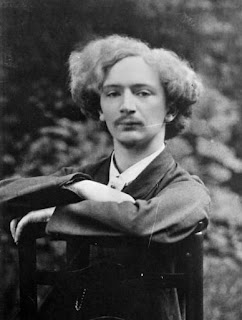 English poet Algernon Charles Swinburne was born this day, 5 April in 1837, in London. By all accounts Swinburne was something of an enfant terrible - but in strait-laced Victorian England that may not have been a difficult reputation to achieve. Some excerpts from online biographies serve to illustrate how his natal chart matches his reported character very well.

First, his chart, set for 5:00 AM as stated at Astrodatabank, with a "B" rating - from a biography so fairly reliable but not 100% so. 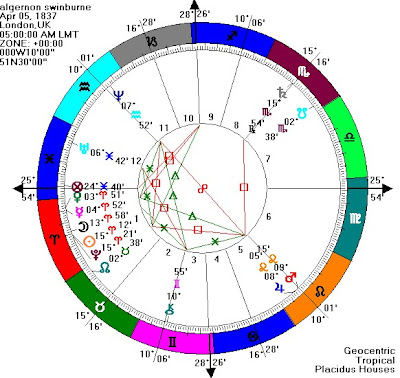 Words relevant to the natal chart are in bold font. my comment follows similarly bolded.

Above clip of text from piece by Kirstie Blair, Swinburn'e Spasms at JSTOR. "Ripples of sexual and religious rebellion" - 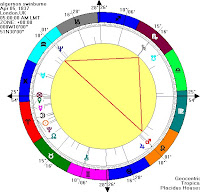 .....two intensely vigorous forces.... strangely combined in his nature; for while no man has ever been a more violent romanticist than Swinburne, yet, as one critic has said, 'All the romantic riot in his blood clamored for Greek severity and Greek restraint.'

Jupiter conjunct Mars in Leo opposite Neptune in Aquarius, both square to Saturn in Scorpio. The severity and restraint of Saturn squaring (conflicting with) the energetic exaggeration of Jupiter/Mars and rebellious creativity of Neptune in Aquarius.

Swinburne carried his radicalism into all lines. Though an ardently patriotic Englishman, he was an extreme republican; and many of his poems are dedicated to the cause of Italian independence or to liberty in general


Neptune in Aquarius, part of the sexi-sextile chain linking Uranus, Neptune and Mercury/Venus, as described above.

Others of his distinctive traits are lavish alliteration, rich sensuousness, grandiose vagueness of thought and expression, a great sweep of imagination, and a corresponding love of vastness and desolation. He makes much decorative use of Biblical imagery and of vague abstract personifications ......forgetfulness of
all proportion and restraint.

He was small, frail, and plagued by numerous peculiarities of physique and temperament, including an overlarge head, nervous gestures, and seizures that may have been manifestations of a form of epilepsy. Throughout the 1860s and 1870s he drank excessively and was prone to accidents that often left him bruised, bloody, or unconscious. Until his forties he suffered intermittent physical collapses that necessitated removal to his parents' home while he recovered. In 1879, Swinburne's friend and literary agent, Theodore Watts-Dunton, intervened during a time when Swinburne was dangerously ill. Watts-Dunton isolated Swinburne at a suburban home in Putney and gradually weaned him from alcohol—and from many former companions and habits as well.

5 planets in Aries, the sign said to rule, or connect to, the head.

It's interesting that Theodore Watts-Dunton acted as the human manifestation of Saturn in the T squre in Swinburne's natal chart, restraining his excesses!


He had an extremely excitable disposition: people who met him described him as a "demoniac boy" who would go skipping about the room declaiming poetry at the top of his voice. In this as in many things, he seems to have eschewed moderation..... Throughout the 1860s and '70s he rode an alcoholic cycle of dissolution, collapse, drying out at home in the country, then returning to London where he would begin all over again.

His mania for masochism, particularly flagellation, probably began at Eton and was encouraged by his later friendships with Richard Monckton Milnes (one of Tennyson's fellow Apostles), who introduced him to the works of the Marquis de Sade, and Richard Burton, the Victorian explorer and adventurer. Some gamey stories survive from the year or so that he spent living at 16 Cheyne Walk with Rossetti: according to one, Rossetti once had to tell him to keep down the noise — he and a boyfriend had been sliding naked down the bannisters and disturbing Rossetti's painting.......... He took a sardonic delight in what the critic and biographer, Cecil Lang, calls "Algernonic exaggeration": When people began to talk scathingly about his homosexuality and other sexual proclivities, he circulated a story that he had engaged in pederasty and bestiality with a monkey — and then ate it. How many of the stories were true and how many inventive fiction is still unclear. Oscar Wilde, thoroughly capable of inventing his own interesting fictions, called him "a braggart in matters of vice, who had done everything he could to convince his fellow citizens of his homosexuality and bestiality without being in the slightest degree a homosexual or a bestializer."
In 1879, with Swinburne nearly dead from alcoholism and dissolution, his legal advisor Theodore Watts-Dunton took him in, and was successful in getting him to adopt a healthier style of life. Swinburne lived the rest of his days at Watts-Dunton's house outside London..... He died of influenza in 1909.

From bio at The Victorian Web


His alleged draw to masochism and other deviations is directly linked, I believe, to his natal sun exactly conjoining Pluto - the darkest of all the planets.

Overall these extracts echo two or three most significant character traits which are evident in the natal chart: a person prone to excesses of all types, including addiciton; a person of multiple eccentricities, physical and mental, a propensity for shocking others, but with a built-in restraining element which needed the help of a human manifestation for it to kick-in. 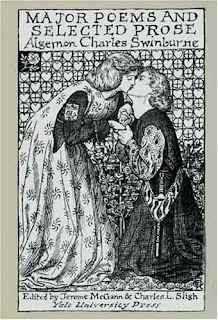 Swinburne's poetry, in general, isn't my cup of tea. It needs too much research to discover what the heck it's all about. Yet some extracts have remained attractive through the years, even in ignorance of their original context. A couple of extracts from longer poems follow with a home-made "Swinburne for Dummies" rundown on the context of the full poems.

From The Garden of Proserpine

(Goddess Proserpina, Roman equivalent of Persephone, was abducted to the underworld by Pluto, released after the anger of her mother Ceres had scorched the earth and forced Jupiter to make a deal with Pluto that Proserpine would be released for part of the year. Her re-emergence = springtime.

At the beginning of the poem is quoted Vicisti, Galilaee = "You have conquered, O Galilean", supposed dying words of Emperor Julian who had attempted to rescind official endorsement of Christianity by the Roman Empire. The poem is a lament on the passing of paganism, and regrets the rise of Christianity)

From too much love of living,
From hope and fear set free,
We thank with brief thanksgiving
Whatever gods may be
That no life lives forever;
That dead men rise up never;
That even the weariest river
Winds somewhere safe to sea.


From Atalanta in Calydon: Chorus.

(Atalanta in Calydon is in the style of a Greek tragedy. Artemis, goddess of the hunt was miffed when the king of Calydon forgot to pay homage to her, loosed a wild boar to ravage the city killing many citizens and destroying the land. Enter the Greek Heroes, including the lovely Atalanta who was reared by a bear and no stranger to the chase. She wounds the boar with one of her arrows, and it is later killed by Prince Meleager. He's all for awarding the head and hide of the boar to Atalanta, thus angering his uncles, who are against a woman from Arcadia receiving the spoils of the hunt.)

Before the beginning of years
There came to the making of man
Time with a gift of tears,
Grief with a glass that ran,
Pleasure with pain for leaven,
Summer with flowers that fell,
Remembrance fallen from heaven,
And Madness risen from hell,
Strength without hands to smite,
Love that endures for a breath;
Night, the shadow of light,
And Life, the shadow of death.

And the high gods took in hand
Fire, and the falling of tears,
And a measure of sliding sand
From under the feet of the years;
And froth and the drift of the sea;
And dust of the laboring earth;
And bodies of things to be
In the houses of death and of birth;
And wrought with weeping and laughter,
And fashioned with loathing and love,
With life before and after
And death beneath and above,
For a day and a night and a morrow,
That his strength might endure for a span
With travail and heavy sorrow,
The holy spirit of man.

Great piece. Did you mention that he had flaming red hair? Another quintuple Aries poet with much in common: Baudelaire!

Astrodreamer ~~ Hi! Thank you! No, I forgot about the hair colour! I had meant to include a coloured illustration/cartoon showing his red hair then forgot to do so (or worried that copyright police might come to get me if I did?)
:-)
Baudelaire eh? I'll bear that in mind and investigate.