"The English are meant to be eccentric. To be removed from the centre, quirkily brave in opinion, individualistically creative in behaviour, is a proud English boast in both the republic of letters and in the parliamentary monarchy of daily governed reality. Nobody does eccentricity better."
(From: In Praise of English Eccentrics - Hywel Williams,
Guardian)


So.....Happy Birthday to one of England's eccentrics:
David Icke!

Being English myself, and having natal Sun in Aquarius to boot, I claim eccentricity credentials, but fail - by miles - to match David Icke's masterful embrace of the trait. 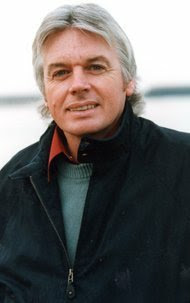 I've posted about David Icke before, as have many other bloggers. My 2008 post is HERE, and one from 2007 by my blog-buddy R.J. Adams is HERE. Talented astrologer Jude Cowell of Stars over Washington blog wrote about Icke last year HERE - each of those posts has interesting comments from readers too.

Mr Icke goes too far, that's my overall take on his propositions. Had he chosen to be a sci-fi author he'd be world famous and very rich today. He has such fluency of ideas and expression, such wide ranging imagination and creativity. I intend no sarcasm here, this is a sincerely felt opinion.

In trying to extract some feet-on-the-ground useful kernel from Icke's writings and speeches, one has to admit there has been, in the past few years, further evidence that at the very heart of Icke's meanderings something valid lies. The thought that, as Bob D. wrote in his lyrics, "something's happening here, but we don't know what it is, do we, Mr Jones". 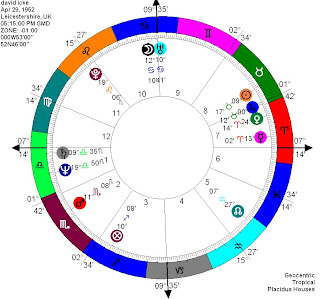 I suspect (whether showing my innate eccentricity or not) that there are people pulling strings behind the curtain we call reality, in politics and in finance.

As R.J. Adms pointed out in his post linked above, Icke's views are not new, others had been treading a similar path long before before he set out on his. And for sure, he'll not be the last traveller in that direction.

From David Icke's natal chart, above, with data from Astrodatabank, it's not hard to see "where he's coming from". He's coming straight from Moon conjunct Uranus in Cancer - and on the midheaven angle of the chart. Moon=inner self is at its purest in home sign Cancer; Uranus = eccentric pure and simple. Neptune (creativity, illusion, delusion) in his first house of self underlines what Moon/Uranus is telling us. Had Saturn been found a few degrees closer to Neptune, calming and limiting its visions the world might have welcomed a much less less whacky author of brilliant novels.

The blog will now be on hold. Husband and I taking off to celebrate our 8th wedding anniversary (bronze, I think). Back in a few..
Posted by Twilight at Sunday, April 29, 2012

Enjoy your few days away :-)

This particular Son of God is a bit of a nutter. And as a nutter myself, this is condemnation indeed.
Attention getting son. The one who throws tantrums or cries wolf until he gets his way.
Anywuz, be that as it may, congrats on the 8 years of your USian journey, T. And enjoy your wee trip.
XO
WWW

Goodness! I'd forgotten I wrote that piece. I feel somewhat sorry for David Icke. He's been a failure at everything he's attempted. Apart from convincing a few of his fellow crazies, he's even failed at being a prophet.

I'm glad you enjoyed your trip. Congrats on surviving America for eight years.

RJ Adams ~~ He has succeeded in one thing - his name is known by many! Notorious rather than famous though. ;-)

Thanks it was a good one, with no upsets for a change.

Congrats to you also - you've been here longer I think....are we like the mythical frog in a pan of water heating slowly, not feeling the heat enough to jump to safety? ;-)