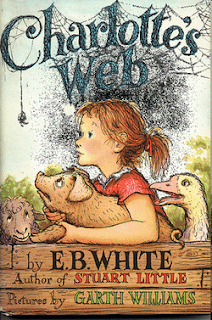 Children's book illustrators are "a breed apart" in the art world. Garth Williams was one such, and really, his name should be better known.

He was a mid-April Aries-type, born
16 April 1912; he died in 1996. Williams sort of "fell into" the work of illustrating children's books. Both his parents were British artists who moved around quite a lot: New York, Canada, England. His first aim was to be an architect, but the Great Depression, and later World War 2 got in the way of his ambition.

He studied portraiture and sculpture. 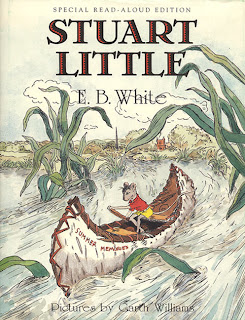 After the war, in the USA, he produced art work for The New Yorker. His work must have caught the eye of E.B. White, author of Stuart Little - illustrating this book was Garth William's entrance into the world of children's book illustrating, a world in which he stayed from 1945 for the rest of his professional life. His work on E.B. White's Stuart Little and Charlotte's Web, followed by a commission to illustrate a set of eight books in Laura Ingall Wilder's Little House series cemented his reputation and name among children's authors - if not in the minds of his young readership. 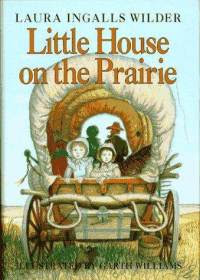 His style is easily recognisable, and admired by both young and older fans for his signature ability to endow animal faces and bodies with recognisable human emotions, gestures and body language, without this seeming to be in any way false. 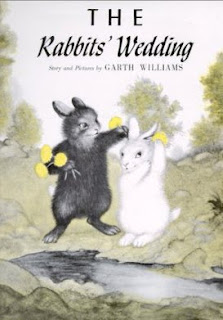 He wrote a few children's stories himself, only one of these achieved much publicity. The Rabbits’ Wedding, published in 1958. It raised a few hackles because he had depicted, quite innocently, a marriage between a white rabbit and a black rabbit. The book was castigated, even burned, in the American South, an area still resisting the desegregation movement. His book became a best seller.
Williams’ response:

“The Rabbits’ Wedding has no political significance. I was completely unaware that animals with white fur were considered blood relations of white human beings. It was written for children from two to five who will understand it perfectly. It was not written for adults, who will not understand it because it is only about a soft furry love and has no hidden messages of hate.” ( quote from Time.com) 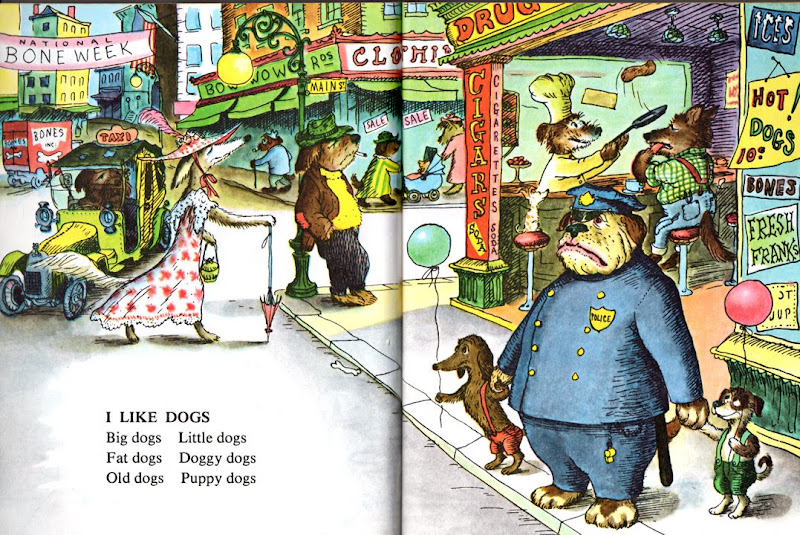 There are hints in various biographical articles that his life, outside of illustrating, may not have been the innocent and serenely romantic haven often depicted in his work. From a piece at Answers.com :

Although he avoided sentimentality, his work, especially when the subjects are animals, often suggests Romantic escapism—life is simple; the characters are charming and innocent. This may have been Williams's artistic counter to his own rather chaotic personal life: the tragedies and displacements of World War II, his peripatetic wanderings, and his four marriages.

Williams married four times, and helped nurse one of his wives through a terminal illness. Reading his own account of his life in the Something about the Author series, it is striking that his succession of wives tended to be extremely young – one, a ward of the family, another a young woman with polio – when he married them. In the 1960s and 1970s, his restless, adventurous spirit took him to Mexico, where he bought the ruins of an abandoned 400 year old silver mine, and rebuilt the adjacent villa as his home and studio. Reportedly, the villa contained an internal waterfall and a dining room that could seat up to 150 people. 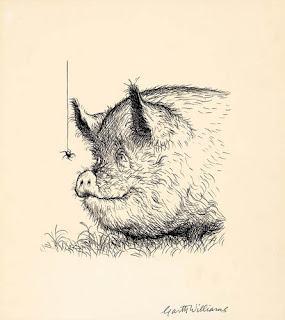 In many such respects, Williams seems to have been untouched by age, and retained his youthful vision until the end of his life. Only half jokingly at 80, when one interviewer noted that his youngest daughter was now 50 years old, Williams reportedly replied : “ But how can that be – when I’m only 42 !” 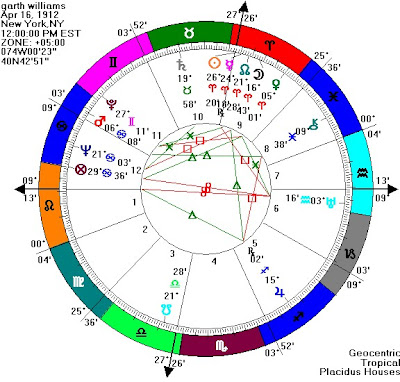 He was a quadruple Aries with both Sun and Moon in that sign as well as Mercury and Venus. How this translated in his personal life isn't known, but it doesn't compute too clearly with the style of his illustration. Neither does Uranus in its home sign Aquarius, sitting in harmonious sextile to Venus, planet of art. His artwork isn't the least bit Uranian.
His Arien and Uranian traits must have manifested in his non-professional life. 4 wives, reportedly bohemian lifestyle, and "restless, adventurous spirit" - there ya go - thats a quadruple Aries and Uranus in Aquarius!

For astrological reflection of his art style see Saturn in Taurus (sign ruled by Venus planet of art) in harmonious sextile to Neptune (creativity) in Cancer (sentimental, nurturing, romantic).

Thanks for this post - it brought back so many pleasant memories of books I loved when I was little :0 BTW - What is the name of the book you have pictured on dogs?

I think the doggy pic came from Mister Dog - meant to go back and add that, but forgot.