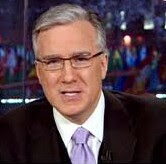 I haven't seen Keith Olbermann's show on Current, it's not available through our cable package. Occasional YouTube videos of clips from his show prove that his style has remained much the same as during his time at MSNBC : angry (with good reason) and passionate. 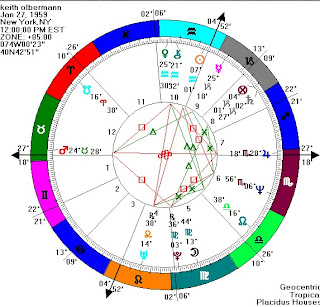 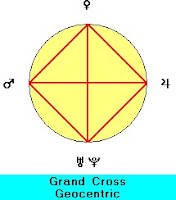 A Grand Cross formation in his natal chart links planets in fixed signs: Mars in Taurus, Venus in Aquarius, Jupiter in Scorpio and Uranus in Leo (also loosely Pluto in Virgo). This configuration is significant in Olbermann's overall nature. Astrologers see such a formation, especially when in Fixed signs, as indicating a constant state of tension and challenge - and certainly no indication of a relaxed, easy-going temperament.

While to his TV audience Olbermann comes over as clear, fairly informal, informed and passionate about his subject, behind the scenes he is reported by those who have worked with him, to be difficult. It seems he "doesn't play well with others". Or perhaps others don't play well with him ? Sun in Aquarius people can appear intimidating, cold or stand-offish to some non-Aquarius-types. Of the Air signs Aquarius is generally less sociable than Gemini and less overtly charming than Libra. (Disclaimer: my birthday is on the same day as Olbermann's - I was not born the same year though).

Another astro point to consider: Olbermann's natal Saturn at 2 Capricorn is still within orb (limit) of transiting Pluto currently at 9 Capricorn. This was also the case during his firing from MSNBC last summer. Pluto impacting a personal planet can play havoc. I know this from the time Pluto transited my natal Venus and my whole world collapsed subsequently to be re-built. As Saturn connects to work (rather than Venus's connection to love in my case) Pluto transiting natal Saturn is likely to be transformational in the work area in some way or other. Something else to consider: Al Gore, one of Current TV's founders has Moon at 3 degrees of Capricorn - also under transiting Pluto's shadow. Perhaps they have both been feeling extra scratchy during recent months.
Posted by Twilight at Sunday, April 01, 2012

Oh, dear, Olbermann's out again, is he? Like you, I haven't watched him since his days at MSNBC, and even then I found him somewhat jaundiced at times, though quite excellent at others. Can't speak for the astrology, but I'm really not surprised. He comes across as rather arrogant and 'tetchy'. Though, definitely not in the same league as his vile, repulsive, replacement at MSNBC, Lawrence O'Donnell - ugh!
Obviously, birth years make a difference, as I'm quite certain you're neither arrogant, nor 'tetchy'. ;-)

RJ Adams ~~ I haven't been watching MSNBC either, so haven't been subkected to O'Donnell - i did see him a few times before Olbermann's exit though. He wasn't too bad then - maybe he's been encouraged to take on KO's mantle of needing a bit of anger management. Gets the viewers' attention don't ya know!

27 January b'day also for Chief Justice Roberts as well as KO and me. I'm in strange company!
I disown the lot of 'em!
:-)

"Keith Olbermann said a (male) Democratic super delegate should take Hillary Clinton into a room, and only the man should emerge."

It sickened me then, it sickens me now.

Wisewebwoman ~~ I remember thattoo, WWW and was disappointed in him - very- at the time. But to balance the bad with some good - he did (not too long before he left MSNBC) head a drive for free healthcare clinics in a number of states, put some of his own $$$$ into it and thus helped a lot of people with no health insurance.

Whenever I come across instances like the remark by KO - and some similar ones by Bill Maher, I always remind myself of this quote of a person wiser than I
'There is so much good in the worst of us and so much bad in the best of us,' that it ill behooves any of us to talk about the rest of us.'