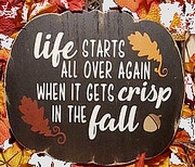 The weather here in southern Oklahoma is, at last, after days of temperatures in the 80s, acting in more autumnal fashion. Today it's actually cool to cold outside - 49 degrees, windy with a storm in the offing. The trees haven't yet donned their fall colours, after a few more of these cooler nights, it'll happen.

In other news, a routine blood test on 16 October, to discover how the targeted therapy medications are affecting my blood quality, showed that the white cell count was below desired minimum - same for platelets. Oncologist told me to take a second week off the Ibrance capsules - these are routinely taken for 21 days with 7 days off each month. This time I had 14 days off. Blood test yesterday showed figures had bounced back to an acceptable level, so off I go again with the Ibrance. I'm to have a CT scan next week - to check whether much has changed for good or for ill since my last scans around 6 months ago. Not looking forward to that!

The problems I had in obtaining a refill of my pain medication last month happily did not recur this time. Our usual pharmacy has changed their wholesaler. The medications I take for pain-while-walking now come from a different generic manufacturer. I was worried that these might be even less effective than those I've been taking, but, though it's a little early to be sure, I do suspect that these might be a tad more effective.

Further afield, Brexit bumbles on...and on....and on. When, oh when, oh when will it end? The part of it all that affects me personally is the currency exchange rate, it affects my two pensions coming from the UK. The rate has been volatile for a couple or more years, diving down then up, down again etc, depending on what had been Boris Johnson's or Ms May's latest failed attempts at bringing about a deal.

In the USA the season known as "The Holidays" is almost upon us. I'm glad to be here, still, to see it once again! Hallowe'en decor has been showing up for the past few weeks in front yards - ghosties, ghoulies and long leggedy beasties, spider webs and witches...you know the drill. We now await the Trick or Treaters on 31st of the month. We had very few last year - disappointing, because it's fun to see the imaginative costumes the kids come up with, and the excitement on the faces of the littlest ones. Perhaps the custom is starting to go out of fashion, for one reason or another - safety, perhaps, and many communal organised Hallowe'en costume events. Next up: Thanksgiving on 28 November, followed by You-Know-What-mas, a month later.
Ka-ching...ka-ching!

On the knitting front, I'm using a big skein of pink "ombre" tinted yarn to make another, longer scarf. It's something I can pick up and just knit, without need to refer to a pattern. I love seeing the changing shades of pink appear, apropos of which, I noticed that my husband is reading "The Secret Lives of Colour" by Kassia St Clair. I shall read it too, when he's done with it. Back-cover blurb: "From the scarlet women to imperial purple, from the brown that changed the way battles were fought to the white that protected against the plague, from kelly green to acid yellow, the surprising stories of colour run like a bright thread through our history." Several varieties of pink are investigated, for example: Baker-Miller Pink; Mountbatten Pink, Puce, Fuchsia; Shocking Pink, Fluorescent Pink, and Amaranth. Maybe some of those will appear in my scarf. 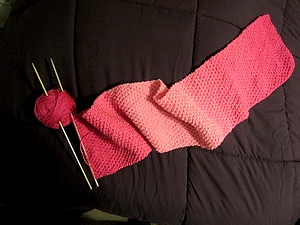 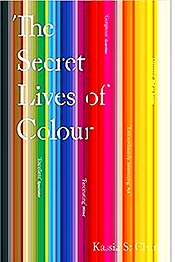 I don't have much news right now, so a few links to recent internet items I enjoyed:

As well as loving the sight of a wee bear's antics (Who's been playing on my staircase?") I learned a new word: 'parkour'. For anyone else who is as out of the modern word loop as I am, here's some information about that word: https://www.britannica.com/sports/parkour.

Here's the article with a video included.

Bear Family Breaks Into Home And Cub Parkours Down The Staircase

A piece from Ian Welsh's blog might be of use to some of us - or even to all of us, in due course when, and if, things suddenly go haywire. (A general link to all of Ian Welsh's blog pages is among assorted links in the sidebar.)

The Sartorialist has been a daily stop on my internet wanderings for many years. Recently the blog's presentation style has changed. Now we can see beaucoup street fashion instead of just one or two pieces of the master photographer's work per day. Commenting is no longer available on the blog page, but probably remains available on other parts of the net, into which I do not venture (Facebook, Instagram and suchlike). 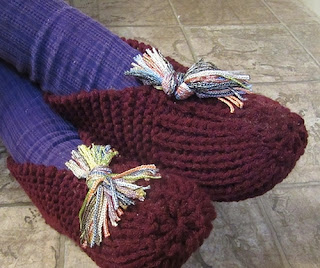 Just a peek at the slippers I had begun knitting at the time of my previous post. They are not particularly stylish, but they are warm and good enough for keeping the tootsies comfortable while watching TV on a winter evening. Decoration will be changed when I can find something better - or try to make a couple of pom-poms to attach.

Two Needles... of the Non-Medical Variety

The photograph is evidence of what I've been doing lately to keep myself occupied, instead of regularly scribbling on the blog. I had been wondering whether I would be able to remember how to knit - even how to cast on the stitches with which to knit! In my younger years I used to knit a lot, sewed too, and embroidered. I left it all behind with the coming of a home computer, back in England. This, of course, opened the door to the internet tempting me with lots of different things to do. 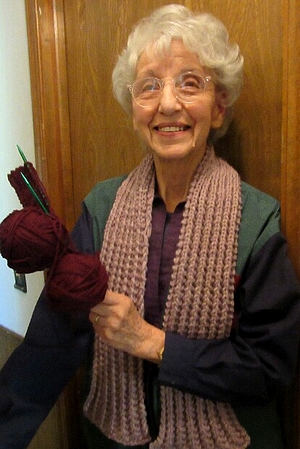 A week or two ago I found a free knitting pattern on the internet for the scarf you see around my neck in the photo. I bought the recommended yarn and knitting needles online.

I had first learned how to knit in junior school, back in Hull, England - at around 6 or 7 years old. We were taught how to knit a cover for a wooden coat hanger. My Mum kept my rather clumsy cherry red effort in use, in her wardrobe, during the rest of her life. Mum was an expert Fair Isle knitter - something she had done in the evenings and nights during the long war years - so many fearful hours in Hull, waiting for the Air Raid siren; waiting more eagerly for the "All Clear!" Eventually Mum was able to add a little finesse to my basic, clunky, knitting ability. I never did reach her level of skill and patience to knit the beautiful intricate patterns of Fair Isle such as she produced. I loved wearing the oft-admired sweaters she knitted for me.

It turns out that knitting, basic knitting at least, is bit like riding a bike - one of those things you never forget how to do. With yarn and needles to hand I cast on X number of stitches with never a thought of "Now - how do I do this?"

The pattern of the scarf in the photo, said to be easy enough for beginners, was called "English Rib", though I've seen similar patterns elsewhere under different names. Hardest thing to remember, for me, was "am I on Row One or Row Two?" (of the simple 2-row pattern). After a couple of errors I got the hang of it. The scarf was finished rather quickly, thanks to thick yarn and fat needles.

I've just begun the piece of knitting I'm holding in the photograph. It is going to develop (I hope) into slippers, from a pattern available, free, in numerous places on the internet. The basic pattern is said to be "decades old", and very easy to do as the slippers are knitted flat. Pattern suggests using two strands at once of a certain type of yarn, something likely to slow me down, along with the choice of slimmer needles, but will produce more sturdy slippers. We shall see. Perhaps there'll be a photo later on, as evenings grow cooler at last, attesting to the viability of flat-knit wool-warm slippers. 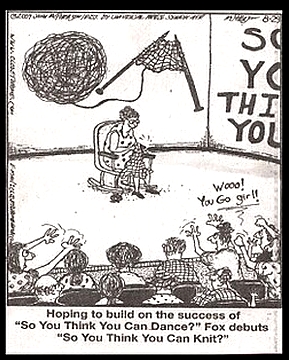 A few knit-wise words from other ladies:

“Advice for New Knitters - When choosing a pattern, look for ones that have words such as "simple", "basic", and "easy". If you see the words "intriguing", "challenging", or "intricate", look elsewhere. If you happen across a pattern that says "heirloom", slowly put down the pattern and back away. "Heirloom" is knitting code for "This pattern is so difficult that you would consider death a relief".”
― Stephanie Pearl-McPhee, At Knit's End: Meditations for Women Who Knit Too Much.

“She was passionate about knitting because it allowed her to reach a state of peacefulness, and she loved to embroider because it let her express her creativity. Both activities were liberating. They allowed her to exist outside of time.”
― Laura Esquivel, Pierced by the Sun.