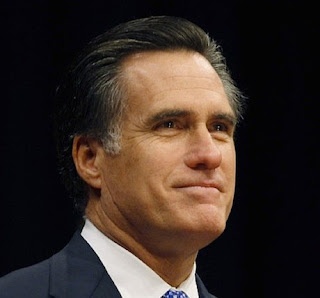 Writers, TV pundits, bloggers and commenters around the net are trying to drum up interest, excitement, angst or disgust at the fact that Mitt Romney seems certain to be the Republican presidential candidate in November's General Election. Labels attached to Romney by most liberal-types so far have been: boring, stiff, a flip-flopper, a liar (goes with the territory and is not exclusive to Republicans), doesn't understand women, out of touch with the 99%, along with an assortment of other unfortunate real and imaginary traits. Republican-types, though possibly secretly seeing Romney as uninspiring, try to focus on his competency in business, which, they say is key to helping bail out the sinking ship we all inhabit at present. 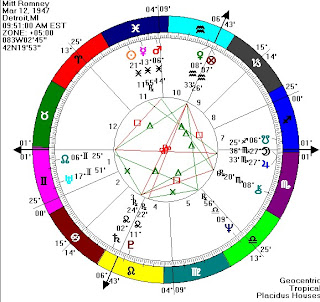 Personally, I'm relieved that Mitt Romney will be the Republican nominee, bearing in mind the alternatives who've alternately entertained or scared the pants off us over recent months.

Looking at Romney's natal chart, and trusting my own astro-antenna, I cannot bring myself dislike the guy or see him as likely to be any worse a choice than for President Obama to win a second term. Yeah, yeah (to my husband) Supreme Court picks - I know! Dang! But it'll make not a shred of difference who you and I vote for in November, because Oklahoma, as a state, will vote strongly for any Republican candidate on two legs - it's the default position of everyone and his 4-legged dog in this nutty state.

A benefit of having Mitt Romney win in November would be that in 2016 the political pendulum would swing back, a Democrat would be a near certainty to win then, and by 2016 there's a chance that somebody with real left-wing tendencies, someone who would dare to break rank and remain unharnessed, not obligated to corporate masters, might come forward, in stark contrast to the center-right tendencies of our current so-called "Democratic" corporate-owned president. Or, even....a strongly backed by the public new third party could have arisen, perhaps a much-needed amalgamation of all the would-be third parties we have in the shadows at present. Whereas, if we were to see a second Obama term now, the Republicans would be lining up again in 2016, to catch the then almost inevitable political pendulum swing. At that point there may not be anyone as mild as Romney in the mix.

My interpretation: Romney will prevail. Early Nov. Jupiter, retrograding but still almost conjunct Romney`s Uranus, and to become stationary by end Jan. 2013 (Inauguration) on Romney`s NN. From there, direct again by end Jan. 2013, Jupiter will soon be conjunct R`s Uranus, while Saturn will have completed his transit over O`s very nebulous Neptune (citing your blog, T.), putting an end to that `dream of a presidency`?

Amazing isn't it? The way this country has evolved both politically (demographically that is)and mentally as a nation. It should be quite a circus. Btw....I really love your blog.

I can't tell the difference between the 2 parties any more. No hopey-changey evident for either. Like you say T a new party of true democracy is the only hope or change.
we have seen strong resurgence of the so-called left here in Canada in reaction to our corpo-pimp Harper (fracking? - bring it on!).
XO
WWW

That's a brave prediction, GP!
I see where it's coming from too.
I suppose, though, we could look at it froma nother angle - perhaps it'd be luckier for Romney if he didn't become Prez - have a worry-free existence, better for health etc.... that could be Jupiter's gift to him. :-) Likewuse for Obama - Saturn =more work and its attendant worries waiting for him?

I'm quite glad not to feel engaged in the fray this time around. I can watch from the sidelines without caring much who "wins".

Our election gift will have either a blue bow or a red bow on it, the box will have much the same content.

Wisewebwoman ~~ Yes - it'll take time for any new party to gather strength. No sign of anything doing yet in the US. There are bits and pieces of third + parties around but none strong enough to get onto the ballots of all states - so in the end they're existence is meaningless. It's a waiting game.

I've always wondered how the Tr Saturn t-square Obama's Jupiter/Mercury during Election Season will play out. Safe to say he won't be getting any special handling or coddling during the debates this time around and, rather than casting blame on others, I suspect Saturn will force him to take responsibility. If Obama refuses, Saturn will have some harsh lessons to teach.

But a friend of mine who's politically adept has insisted since Obama started running for Pres in 2008 that his endgame has always been the post-Presidency career. His interest in governing is slight and it's really the sitting on the Boards -- i.e., doing nothing for a lot of money -- and "running" Foundations and selling books and living the life of an ex-President that has interested him.

As for Romney, with his Progressed Moon having recently entered Aries, if I were Obama I wouldn't assume this is in the bag. I'm in NYC and have yet to find one person planning on voting for Obama or, at the very least, even mildly excited at the prospect of having to vote for Obama.

Then again, I wouldn't rule out a Hillary VP surprise at some point to pep up the troops.

kicksotic ~~ Obama is going to have to work a lot harder this time, yes!

You friend could well be correct. I often think about a remark of Obama's in the 2008 debates, when the candidates were asked about what they dislike about their jobs(or something to that effect) and Obama said he doesn't like doing desk work, he delegates all that to others. Now, while, as a super-manager of sorts, the Prez must obviously delegate a lot, still his pat remark rang warning bells for me. :-)

The possibility of HC being brought in keeps popping up, then she keeps knocking it down. - But if Obama seemed to be trailing when the campaign proper gets underway, who knows what they'd try; they would possibly play on her sense of duty, which I suspect is quite acute.

I've read your analysis and completely agree with you. But I also agree with your husband. There's never a guarantee we won't get another Thomas, Scalia or Roberts but its less likely with a Democrat. Personally, I'm a registered independent. But I'm from California so I'm actually a bleeding heart liberal :)

Jennifer ~~ I registered Independent too, and class myself as a mild form of socialist when compared to what's classed as "left" (Democrat) here in the US. :-)

The Supreme Court issue is almost like a "gun to our heads", I agree - and that, sadly, allows the Democrats to keep veering to the right in ordrt tyo keep the cash rolling in from backers.

The whole system is screwed up really. We'll likely not have any choice but Republican or Democrat due to Oklahoma's strict rules for ballot access - more guns to heads!

Democracy got lost somewhere along the way.