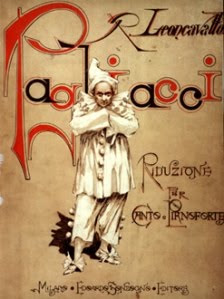 In the language of today's pop world Ruggero Leoncavallo (born 155 years ago today) could be termed "a one-hit wonder". His two-act opera Pagliacci, just one of around 20 of his compositions, operas and operettas, is the only one to have hit a strong communal nerve in audiences through the decades.
(Illustration: Cover of the first edition of Pagliacci published by E. Sonzogno, Milan, 1892)


Cavallo, at the time a little known composer, is said to have been inspired to write an opera in the verismo (= realistic) style which had brought success to Pietro Mascagni with his Cavalleria Rusticana - verismo being a push-back against the old-style romantic operas which until then had dominated the Italian operatic scene.

Leoncavallo's father was a judge; the plot of Pagliacci was, according to the composer, based upon a murder trial over which his father had presided. However, this proposition is questionable. Leoncavallo was accused of plagiarism by the author of a play La Femme de Tabarin which had a similar theme to that of Pagliacci. Perhaps there was some truth in both possibilities.

First performed in Milan in 1892, in London and New York the following year, Pagliacci was an immediate success. The aria "Vesti la giubba" (= "Put on the costume" or sometimes "On with the motley") has been sung at some time by any male opera star one could name.

The story of Pagliacci is set in 19th century southern Italy. A company of travelling players/clowns is led by Canio whose wife Nedda is lusted after by the opera's villain Tonio, but loved by Silvio, a local lad. When Nedda rejects Tonio’s advances but is seen in Silvio's embrace, Tonio tells Nedda's husband Canio, resulting in double murder and tragedy. The opera's style of a play-within-a-play adds to the intrigue of it all. Shakespeare showed how this style could be successful in, for example, A Midsummer Night’s Dream.

I'm not going to miss an opportunity to feature one of my own first musical heroes: Mario Lanza. The first record I ever bought using my own saved pocket money was an LP by Mario Lanza! He may not have been lauded by the starched shirt operatic "in-crowd" but he always reached me - still can. This video is from his last movie: For the First Time.

To act! While out of my mind,
I no longer know what I say,
or what I do!
And yet it's necessary... make an effort!
Bah! Are you not a man?
You are Pagliaccio!

Put on your costume,
powder your face.
The people pay to be here, and they want to laugh.
And if Harlequin shall steal your Colombina,
laugh, Pagliaccio, so the crowd will cheer!
Turn your distress and tears into jest,
your pain and sobbing into a funny face - Ah!

Laugh, Pagliaccio,
at your broken love!
Laugh at the grief that poisons your heart!

Leoncavallo's natal chart is interesting. He was born in Naples on 23 April 1857. No time of birth is available, the chart here is set for 12 noon. 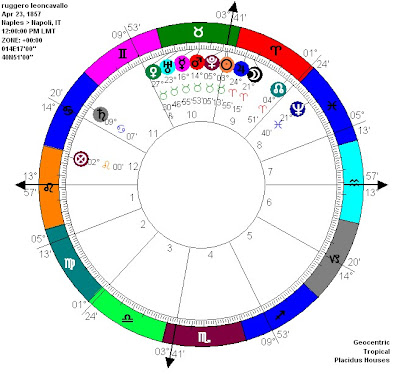 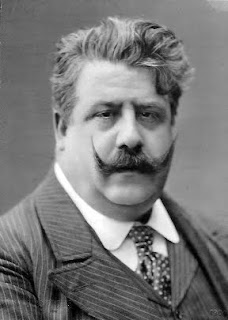 This is a good example of a natal chart with planets in what astrologers term "bundle" shape: all planets within a 120* span, the outside planets in trine aspect - here the outside planets are both in Water signs: Pisces and Cancer. Characteristics of people with this, quite rare, configuration are thought to include an unusual intensity of focus, concentrated energies, specialising in areas indicated by signs/houses involved.

In Leoncavallo's case his energies are focused on Taurus, ruled by Venus planet of the arts, and dynamic Aries, where his Moon would be, with Jupiter whatever time he was born. Neptune in Pisces and Saturn in Cancer are the only planets outside of the Taurus/Aries cluster. Creative Neptune at home in Pisces harmoniously sextiles Venus and likely semi-sextiles Moon/Jupiter too. Saturn in Cancer sextiles most of the Taurus planets.

He even looks very Taurean - as did Paul Poiret (Friday's post) - a commenter described Poiret as "a bull of a man", and here's another! With such emphasis on Taurus, even if we were unaware of its owner's identity, this would have to be the chart of someone involved in art or music.

Sun conjunct deathly dark Pluto, and Uranus conjunct the allegedly unfortunate/intense Fixed Star Algol, which lay around 24/25 Taurus, are elements of his natal chart which exactly match the tragic storyline of Pagliacci.
Posted by Twilight at Monday, April 23, 2012

GP: Enjoyed the excerpt, in my surroundings, especially. Could not augment the volume, but so at least I did not chase away the birds ...

Leoncavallo`s map is extraordinary indeed. One of those forces of Taurian nature to make their mark!

This aria is one of my favourites - always get tingles/goosebumps.
:-)

The exceptional chart makes it surprising he didn't have more general success. although I suppose we could say that his single-minded nature brought forth just a single hit.

Of course I've seen it being the opera fan that I am (and loved it, wept, of course).
As to Mario, always loved him and saw his movies too. I remember one where he was cast and gained so much weight he was fired and (I think) Edmund Mulhare took over the lead and Mario sang. "Student Prince", I think.I can always be counted on for trivia, T!
XO
WWW

Wisewebwoman ~~ Yes - it was Edmund Purdom though. ;-) Saw the film several times. :-) I felt very miffed that I could hear him but not see ML.