While watching last week's edition of American Idol I noticed mention of someone or something called "gotye". Being completely out of the loop of today's popular music we both, husband and I, gave each other a puzzled look, then forgot all about it. The name, somehow, came up on my radar again while sitting at the computer, so this time I Googled. 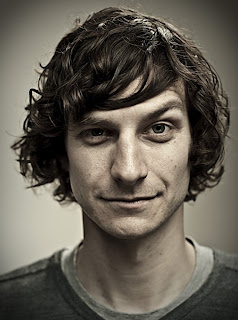 Gotye, it appears, is stage name of Belgian-born Australian musician Wouter/Walter De Backer. (Gotye is pronounced Gaultier, as in the name of the fashion designer.) Gotye's lucky star has suddenly started to shine in the pop music world. His song Somebody That I Used To Know, described as "a hypnotic, xylophone-driven heartbreak duet", has reached the number one spot on various charts in 13 countries. The song found its way into the wider public consciousness via many millions of hits on a You Tube presentation where Gotye and female vocalist Kimbra appear nude, though body-painted, in a video featuring the song.

After I'd drafted this post we caught Gotye and Kimbra on Saturday Night Live. A refreshing change from SNL's usual musical fare, well worth a listen, more "organic" than anything I've seen from today's pop world for quite a while. Maybe the synthetic Gaga, Perry and their ilk are now played out - had their day.

From a couple of articles online (here and here) I gather that Gotye is: a) a perfectionist and b) a musician/singer/songwriter whose aim is to produce something different, and "arty", using "sampling" techniques and unusual instrumentation. His musical style is likened to past artists such as Peter Gabriel, George Michael, and Hall & Oates.

At 31, Gotye has been composing and performing for years, but has only now managed to hit the right balance of arty and unusual while still remaining accessible to the masses.

I don't have a time of birth for Gotye, he was born on 21 May 1980 in Bruges, Belgium, and has lived in Australia since the age of two. 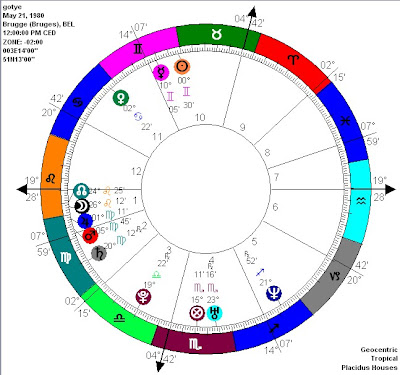 His natal chart, set for 12 noon, clearly indicates his perfectionist traits via Jupiter, Mars and Saturn all in the perfectionst's sign Virgo. Natal Sun and Mercury in writer/communicator sign Gemini is no surprise either. Planet of the arts, Venus, in sensitive, sentimental Cancer semi-sextile Sun/Mercury, and sextile Jupiter/Mars in Virgo, ties up an apt astro-circuit for this fast-rising musical phenomenon.

Without his time of birth it's not possible to note where Uranus (the unusual/unexpected) falls in relation to the angles of the chart, either natally or when re-located to Australia, but I'd bet that it's close to one of the angles.
Posted by Twilight at Monday, April 16, 2012