As it's Good Friday, as well as Arty Farty Friday, it's only right to mark the day with appropriate artwork.

I'm not a religious individual, but I do believe that the man we know as Jesus lived once, preached peace and forgiveness, and was executed for his efforts. His words must have been inspirational to the masses in a way the Roman occupiers would not appreciate, being fearful of losing their control of the population. So, though I am not one with the rest of Christian belief, Good Friday is not without relevance for me.

Artists through the ages have left us countless interpretations of the Crucifixion of Jesus. Two I appreciate most are:

The Darkness at the Crucifixion by Gustave Doré 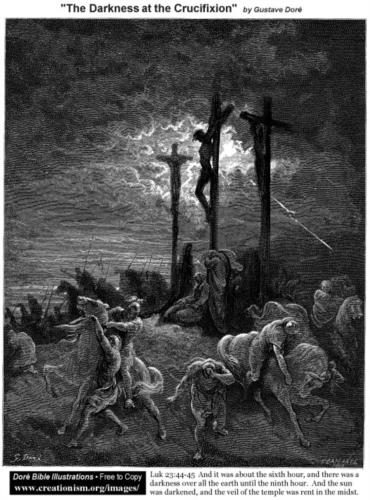 and Salvador Dali's Christ of Saint John of the Cross . 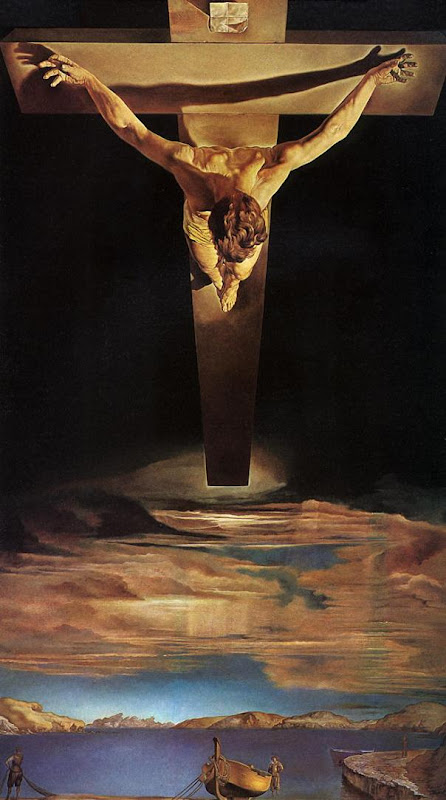 Among my husband's early artwork, from what he calls his "religious period", mid 1950s, early 1960s, there are one or two depictions of the Crucifixion. I have his permission to show these, along with some of his words:

The "religious" period popped up from time to time. I can only remember thinking that colors alone had emotional qualities. Orange, I felt, was stressful, painful.

I probably thought at the time that these were entirely unique themes. 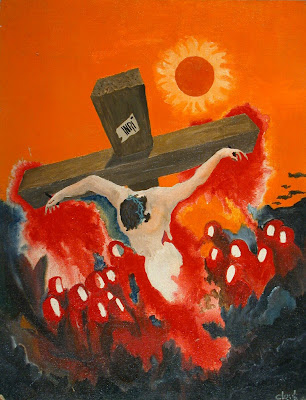 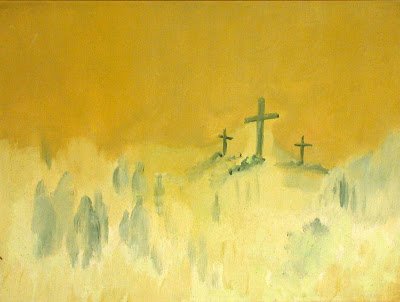 Once, in a cemetery, I stood looking into the sunrise. Through the morning mist, light and shadow, some of the markers and trees seemed to be a Biblical scene instead of what it really was: a bunch of ancient head stones and monuments. 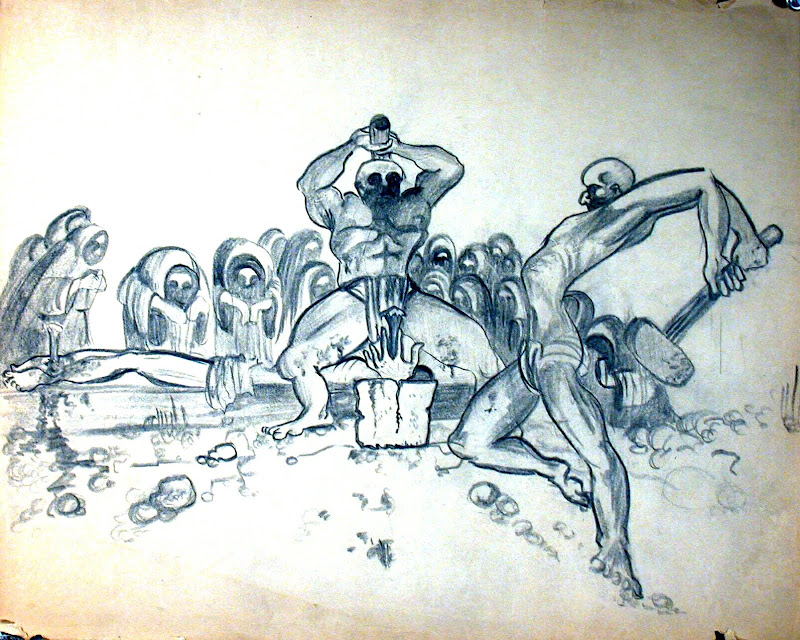 I think I learned to draw from copying illustrations in pulp magazines that were plentiful in the 50's decade. My biggest ambition then was to become a cartoonist or illustrator so most of my work was in pencil or ink on scraps of white card. 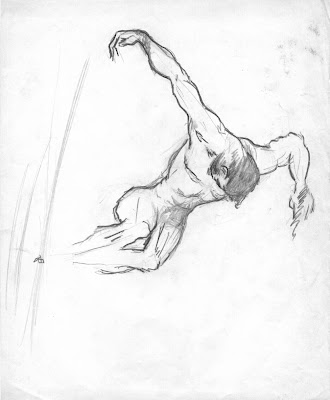 That second to last image, T, is so powerful.
I'm like you, fairly indifferent to all the woo that's going on around me.
XO
WWW

GP: Precession of the Equinoxes, every 2000-2150 years or so, depending on calculations and/or beliefs, something `major` takes place on this planet. The last `big one` was evidently the events around J.C.

He initiated,symbolises, operated (?) the beginning of the Era of Pisces, his disciples were mostly fishermen, he fed fish (after multiplying them) to the masses and the poor (what you like T. I guess).

But he also put an end to the era of Aries (Egypt, Judaism, ancient Rome). The most salient symbol of that era was the Ram-Aries, being substituted for Isaac in Abraham`s sacrifice.

Before that, 2000 years or so the world was dominated by the sign of Taurus (Mythraism, the Hindous with their sacred cows, Babylon).

And then there are those who say astrology is bunk! Imagine, it survived all these beliefs and many still today often fanatic religions. I don`t know of one astrologer who killed others because he believed his science to be `better`.

But I am conscient that the Bible/Coran and similar `holy scriptures` all are decrying astrology. Why, especially when it is historical fact that many Popes were adepts to astrology (probably to further their worldly interests)?

No need to get upset, our science is the most tolerant I have come across. Who wants to argue with the Stars? Only fools, I guess. Happy Easter to all!

Wisewebwoman ~~ That illustration shows the horror of the execution most clearly, yes.

Taking all of the woo out of it does leave enough to be glad of - assuming that Jesus did actually exist - I believe so, even if known by a different name. Without his teachings where'd we be? The fact that they were co-opted and used as control and power tools is the great sin of it all, to my mind.

We can see the astro-related pattern now - now that we stand many centuries back.

Good wishes to you too, GP.

and don't forget Blake's mysteriously mystical variations on the theme
:)