Robigalia ~ Festival of An Unlikely God ? 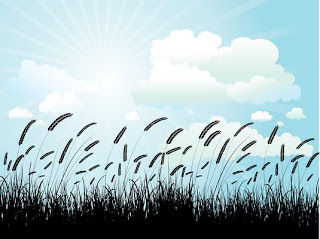 In modern Rome today, 25 April is known as Liberation Day, a national holiday on which liberation from the Nazi occupation and fascist rule during World War 2 is remembered. This day of celebration comes close to a celebration of Rome's birthday (21 April) when it is believed to have been founded by twins Romulus and Remus in 753 BC. In ancient Rome, though, 25 April marked a festival to appease Robigus, god of wheat rust and mildew - Robigalia.

Something as lowly as mildew and wheat disease would seem hardly suitable oversight for a member of the celestial hierachy, yet in those days a crop blight could condemn a farmer and his family to starvation; also Roman economy relied greatly on agriculture, bad harvests were something to be dreaded. I guess, actually, that rather than seeing Robigus as a god he/it represented for the people a personification of the dreaded mildew, so sacrificing to that personification probably helped, psychologically.

Robigalia involved a public procession through Rome and around the fields to a shrine where a rust coloured dog and a sheep were sacrificed, with prayers, incense and wine. Why the dog? Why a rust coloured dog? The colour probably links to the reddish-brown wheat rust. Romans believed in sympathetic magic, meaning anything red, like blood, could also be connected with wheat rust. Mars, the red planet, in Roman mythology was the god of both war and agriculture.

By the year 600 a Christian procession had replaced the pagan one. Rogation Days are April 25 ( Major) and the three days before the Feast of the Ascension ( Minor). The Major Rogation replaced Robigalia, and was shrewdly timed, probably, to counteract the existing "heathen" event. Rogation Day (from Latin rogare = to ask or beseech) was instituted by Pope Gregory I to atone for a lack of sobriety and continence during Lent. Prayers at that time ask for blessings on the fields and agriculture. In colonial America, and even still in some places, Rogation Sunday (the Sunday prior to Ascension Day) was the day farmers and clergy would walk the newly planted fields, praying for healthy crops.
Posted by Twilight at Wednesday, April 25, 2012

GP; ... and to say that this type of interesting information is to be found on a declaredly non-religious blog! But then there are other `contradictions` (and plenty) with declared religious people:

Anti-abortionists or pro-lifers as they call themselves, hardly thought of how contradictory they are: continuing to over-populate this planet until it finally suffocates...

Erm....not sure I follow you, GP. This is a non-religious blog to be sure, but why is this post a contradiction?

Otherwise I agree on the point of contradictory stances of "pro-lifers" who also support death penalty and remain unperturbed about the killing of children and civilians in other countries....and re the over-population aspect of it.
:-)

GP: Will try to be more to the point. When you post a decription of a religious practice (in various shapes, Roman, Christian etc.) on a non-religious blog, without further comment to it's significance (or to the contrary), I found it as sort of condoning with religious practices on an otherwise more critical vehicle in such matters.

But religion (and all the brain-washing that can go with it) is such a permanent fixture in human life, that even your blog, T. does aparently not entirely escape it.

PS. Julian Jaynes (very controversial but to me of very high interest) wrote some 500 pages about "The Origin of Consciousness in the Breakdown of the Bicameral Mind". A possible explanation why religions came about.

I'm interested in mythology, and it's interesting to note the various stands of it that have been transferred to Christianity as in Rogation Day mentioned in the post(this probably occurs in other religions and their countrys' mythologies too).

My own thoughts on how both myths and religions came about is very simple - people wanted to know "why?" and "if?" and because there is no answer, answers are constructed and provided by those with ulterior motives.

According to one of the slightly daffy characters on "Miss Congeniality", April 25th is "the perfect date, as it is neither too hot nor too cold".

Vanilla Rose ~~ LOL! Love it!
"....all you need is a light jacket"
(unless you go to northern New Mexico as we did once at this time of year - it snowed and was VERY cold, and I had only a light jacket.
:-)

All the Woo intertwines, T. Out in the west in Ireland, in a very, very old ruin of a church I spotted fertiility goddesses at the peak of the ruined windows.
It quite cheered me up.

Seasonal goddess worship was huge in Ireland until Patrick and the patriarchy.
XO
WWW

"Robigus, god of wheat rust and mildew"! Poor old deity. He must have been well down the queue when titles were given out.

RJ Adams ~~ LOL! Yes, Robigus surely in the B list of gods - somewhere between god of lice and god of termites. ;-)

Great addition to a very sensitive and awesome blogsite...I enjoy it every day. I never fail to learn something every time I read LCOTE...Keep up the great work my friend.