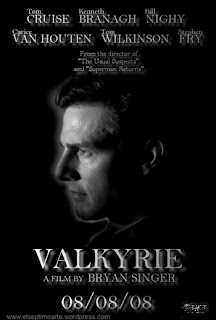 I can't say I enjoyed the movie "Valkyrie", and Himself, whose idea it was to go see it wasn't impressed either. Perhaps the subject matter doesn't lend itself to enjoyment, but is meant to inform rather than entertain.

The movie tells the true story of a plot by German officers to assassinate Hitler during the last year of World War 2. I was left with questions. Why did it take so long for Colonel Claus von Stauffenberg and his supporters to do something, if they felt so incensed by the direction in which Hitler had led their country? Stauffenberg had to sustain horrific injury himself, losing an eye, one hand and several fingers of the other hand before he galvanised into action against the Fuehrer. Having read a little background since seeing the movie, it does appear that Stauffenberg had been trying to persuade others to join him in his efforts for at least a year before the movie action begins. This might have been hinted in the dialogue, but if so, I failed to catch it. 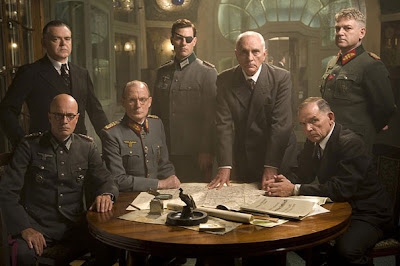 It appears that the explosive devices used in the assassination attempt were far too weak to do the necessary damage. I'd have thought that high ranking officers would have had more know-how and better materials at their disposal. The plot to assassinate Hitler seemed terribly amateurish. Too late, too little. The Germans were already losing the war by 1944. Were these high ranking officers seeking to save face, rather than save humanity?

Perhaps I'm being too cynical, but these were my impressions. The temperature in the almost empty cinema was frigid, which added to my jaundiced view of the movie!

The acting was adequate, Tom Cruise in the lead, along with many familiar British faces in unfamiliar guises did as well as could be expected with the material. The movie could have benefited from a slight change of pace now and again. It was unrelenting in its gloom. The end titles told us that Stauffenberg's wife and children survived the war, she died only in 2006, presumably well into her 90s. A rather more uplifting ending would be to have been to include a scene showing his family at some later date, in peacetime. Walking out of the cinema with the executions and hangings still stinging our eyes wasn't pleasant.

Astrology: Claus von Stauffenberg's chart - born 15 November 1907 in Jettingen, Germany at 1.00 am according to Astrotheme. 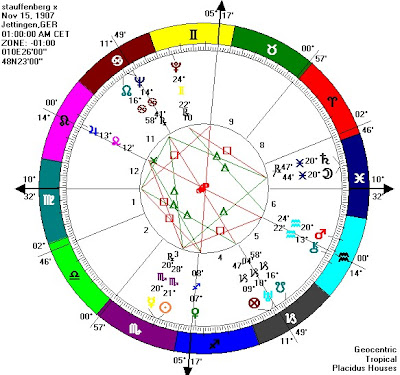 Sun and Mercury in intense Scorpio, in challenging square to Mars in Aquarius. Moon conjunct Saturn in compassionate Pisces, with Virgo rising. 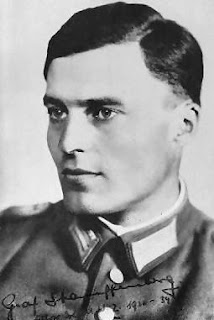 There's a Grand Trine in Water signs linking Sun/Mercury, Moon/Saturn and Neptune/North Node. This isn't the chart of a warrior, I'd expect it to belong to someone with artistic or spiritual leanings, but Stauffenberg was born into an aristocratic Roman Catholic family with very strong military ties. Astrology doesn't let us down though:

"After contemplating careers in music and architecture, von Stauffenberg finally opts for military service, entering the army as a cadet officer in his family's traditional regiment, the 17th Cavalry Regiment of Bamberg.
1930 - Graduating first in his class and receiving a special ceremonial sabre for "outstanding achievements", von Stauffenberg is commissioned as a lieutenant. His military superiors variously describe him as "highly intelligent and of above average ability, both tactically and technically", and "an expert at settling differences, acting as go-between and smoothing out quarrels."
One of his peers says, "I would say that he had an extraordinary gift for making others feel naturally and completely at ease. This was all the more remarkable seeing that he was generally recognised as being well above average intellectually." Another peer describes von Stauffenberg as "a man of extraordinary personal charm." " (Link)

Who can tell how individuals will react in extraordinary circumstances, when bound by family ties and tradition. Stauffenberg, like many men and women on both sides of all wars, should never have been in the military. Since circumstances sent him in that direction, he did act, as far as he was able, in all the circumstances, in accord with his astrological blueprint.
Posted by Twilight at Monday, January 12, 2009

Thanks for the movie review, T. The general consensus is similar to yours.
And the more I see Tom, the more he irritates me so it tends to cloud my judgement. I know it shouldn't.
XO
WWW
PS did you see "The Visitor"?

I don't mind Tom Cruise. He's bland enough to fade into the background for me, even when he's the lead actor. ;-)

I didn't dislike the movie, and though the attempt was unsuccessful, that people chose to act counts for something...

Anonymous ~~~ Yes, it was better than nothing - and there were other attempts too, I think in the closing titles it said there had been 15 other plots.

It would be interesting to compare von Stauffenberg's chart to Tom Cruise's.

I say this in part because I recently read the new Andrew Morton biography of Tom Cruise and the last portion of the book discusses the making of Valkyrie at some length. (Morton's main premise in the bio is that you can't understand Cruise without understanding Scientology. Germany blocked the production of his film on location for some months because of the Scientology connection.)

Valkyrie--like many of Cruise's movies, I believe--was selected not merely to enhance his career but because he identified with the von Stauffenberg character, and his mission to exterminate a perceived evil for the good of humankind. This 'battleship Earth' idea is central to Scientology, which sees itself fighting various forces (like psychiatry) to reclaim good from evil.

I find it nutty and creepy but fascinating!

Poet Girl - Hi!
That's interesting - I've Googled for Tom's chart and had a very quick look; he has a Grand Trine in Water, as had von Stauffenberg - that's a start!

I'll take a closer look later, and if I find more I'll do a post on the topic.

I've never investigated scientology, so can't comment on that score. It's an interesting point you raise though - many thanks. :-)

Poet Girl - I had a more careful look at the two charts. If times of birth are accurate both men have Virgo rising. Also there's a link between Jupiter and Chiron in both charts.

Tom has Chiron and Jupiter conjunct within 2 degrees in Pisces.
Von Stauffenberg had Chiron in Aquarius exactly opposite Jupiter in Leo.

Chiron is a bit of a mystery to me, but traditionally thought of as The Wounded Healer.

I can't say what any of that really means, but it is interesting to guess, and to find some connection there. :-)