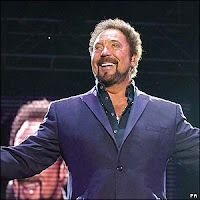 An article by Tony Sachs at Huffington Post a couple of weeks ago jogged my thoughts about Sir Tom, so I took a look at his chart. He's of my generation, and still going strong - I'm a little curious.

What first comes to mind about Tom Jones is that he has always had the reputation of being "Sexy" with a capital S. So much so that gals in his audiences have been inspired to throw items of underwear at him during his performances on stage. He must be transmitting on a wavelength I'm not tuned in to, because I've never found him at all sexy. I do appreciate his powerful voice, and if he sings a good song, I enjoy it, and can partially appreciate what Tony Sachs has to say in his article, linked above.

Tom is one of an army of Welsh singers. As mentioned when writing about Duffy a while ago, almost everyone born in Wales can sing. It's in their DNA. Coal miners, who at one time made up a large proportion of Wales' population, would form themselves into male voice choirs, whose voices echoed around the Welsh hills and mountains - probably still do to this day, even after most mines have long been closed down. Tom avoided having to "go down the mines" to make a living. A bout of tuberculosis left him with a weakness in his lungs, so a life among the coal dust was out of the question. This could be said to have been his saving grace. Tom Jones might otherwise have been just one more powerful voice in a Welsh choir. 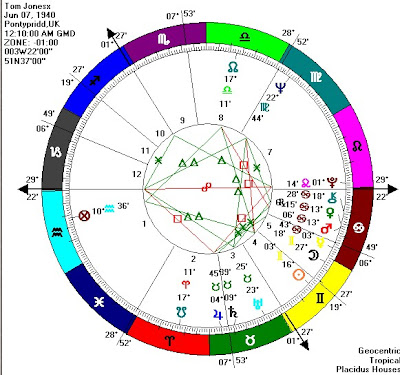 Sun and Moon were in sociable Airy Gemini, if time of birth is near enough accurate. Mercury, Mars and Venus were in sensitive home-loving Cancer. Jupiter, Saturn, Uranus in steadfast Taurus, ruled by Venus planet of music - a link to his natural vocal talent. Neptune in Virgo is in Earthy trine with Uranus - it's the same for many War Babies -but he lacks the third aspect to make up a Grand Trine in Earth which many of his contemporaries have. Instead he has extra Earth coming from his Capricorn ascendant. Pluto in the earliest degrees of Leo provides the only Fire in his chart - a little surprising, and could this be why I personally don't "get" his sexiness. I like a bit more Fire.

Without knowing to whom this chart belonged I'd have said it's "a fairly comfortable chart", its owner is grounded, friendly, but has not particularly wide-ranging interests - focused, sensible yet sensitive. I wouldn't have immediately tagged it as the chart of a person seen as a sexpot. 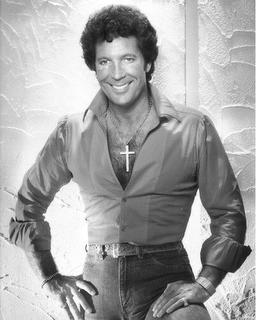 That sexy reputation of his probably links to Mars and Venus closely conjoined at 13 Cancer, but in 6th house of service - ahem!! Oh, and if the time of birth is accurate, Pluto, known for its erotic connections, lies on the descendant, at one of the strongest positions in the chart, that'll be the culprit! Most planets are in the western area of the chart connected to relationships rather than self. His sociable and communicative Gemini Sun and Moon also reflect an innate ability to relate - which he does, very obviously and easily, from the stage. His Sun is in 4th house of home, but his Moon in 5th house of creativity and pleasures - symbolic of the seeming anomaly between his philanderings which always, eventually, end in his return home.

Tom has a home in Los Angeles, it's interesting that when his chart is appropriately relocated Pluto in Leo moves to midheaven, putting his sexyness on the public stage.

This is a Cancerian trait, an exceptionally retentive memory is often found in those with the sign emphasised natally.

His private-life philanderings are the stuff of legend, yet he has remained married to Linda, his wife for over 50 years - Taurean staying power and loyalty, Cancerian attachment to family. Tom's only son, Mark, has helped in his father's career, instrumental in keeping him up to date and in the public eye.

Tom's career spans four decades. He's still going strong, singing with the same power and looking not too bad for his age. He admits to some help on this front, a tuck here, a nick there, some color and a goatee beard all aid his attachment to a youthful appearance. It's said that Pluto in Leo people will not give up their youth easily - here's an example !

A few years ago Sir Tom's fortune was said to be in the region of 175 million pounds - in dollars nowadays, $250 million-ish. A story comes to mind here. My late partner had a good friend, a Welshman, who had been a national boxing champion in Britain, and later at the start of Tom's career, did a short stint as his bodyguard. My partner met Tom Jones casually on a couple of occasions, and once remarked on a huge diamond ring Tom wore. "That's my pension!" he responded. Now, he'll certainly not need to sell that ring to supplement his pension!

The video, from his appearance on Canadian Idol, includes a few words from him, a rapid rundown of his career and brief performances of an old song ("It's Not Unusual) and a new one, which I reckon is one of his best ever, "If Ever He Should Leave You".

You are so right about how the Welsh excel at singing. The BBC ran a Choir competition last year called Last Choir Standing. In the final were 2 Welsh Choirs. One was a Choir of 50 voices from Bangor called Ysgol Glanaethwy made up of mainly teenagers who made it through to the last 2 or 3. See here...

And the winners were also Welsh, an all male choir, though not quite in the traditional sense,more a chamber group, called Only Men Aloud. They had quite a "journey" as seems to be the wont these days. They only formed not long before the contest and initially had to perform without their musical director and still managed to get through. He came back in as they got nearer to the finishing line and finally they took the title and now have a 7 figure contract with Universal....see here

Also in the final group were 2/3 gospel choirs, my favourite being Revelation...

One of their lead singers, David, got married half way through the contest but carried on singing into the final.

AN ~~ I think his fans would accept him "as is" (or was), wrinkles and all - but he obviously lacks confidence in them, and himself, on that score. Strange!

Rossa ~~ Thank you for those links - I shall follow them up a wee bit later. We're off to the flicks in a mo.

I love the sound of a good male voice choir !

His "What's New Pussycat" was the song of a great romance I had in London back in the day, T.
I also heard some incredible stories about his promiscuity which is legendary.
He has aged appallingly. I have difficulty looking at people who die themselves orange or nip and tuck themselves into something their mothers wouldn't recognize. He has done both.
I'd like him better au natural, but his voice sure has got it....
XO
WWW
Tee-hee word ver is "tistan".

WWW ~~~ I haven't seen enough of him on TV lately to assess his nips and tucks - photos have probably been re-touched, and YouTube images are often quite blurry. In general, though not always, women seem to come out of face lifting procedures better than men. Perhaps women's skin has been pampered throughout life so is more malleable - in better condition to sculpt....or something!

I'd be far too wary to try that kind of thing - I hate going to the hairdresser, so having my face dressed would be way out of the question...lol!