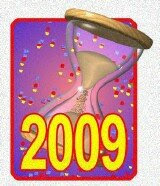 HAPPY NEW YEAR!
I wondered what the tarot would have to say about 2009, so put the question, "What do I need to know about 2009 in the USA?" I made it specific to the USA to avoid confusion, but in the process probably caused some!

I shuffled, cut and drew 3 cards in the following order:

I'd hoped to draw one or more cards from the major arcana, but instead two court cards and a 2 of Coins/Pentacles. I resisted the urge to wait a couple of days and do it again. I always think the first draw offers the best answer, even if it's not offering an immediately clear scenario.

So - I think this is a hint about two people who will become extra significant in some way during the year. But who? 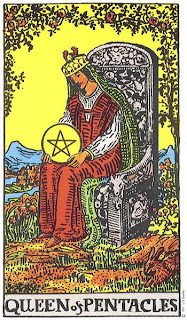 Queen of Coins - Coins equate to the Earth element in astrology.
If I hadn't asked specifically about the USA, I'd have thought of Queen Elizabeth (the literal Queen) who is a Taurean, and really a stereotypical Queen of Coins. I'll still bear her in mind because I've known the cards do a bit of a sideways lurch before. Something connected to the Queen of England then - stepping down, illness, bereavement - maybe? If we stick with the USA, Michelle Obama strikes me as a Queen of Coins. Steady, loving mother, down to earth, sensible, businesslike. Perhaps something affecting the new First Lady, something as yet unknown, big development. 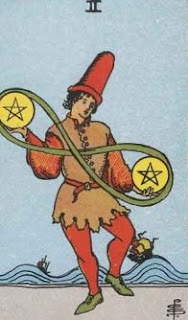 The 2 of Coins can be interpreted as continual change and transformation, but it's not a gloomy card. If approached in the right state of mind the changes can be seen as helpful, leading to an all round improvement. Careful handling is needed, and again Coins/Pentacles relate to Earth, and material things, finance too. We already know this is going to happen, it's apt but nothing new. Could the element of change though be connected to the 2 personalities in the two cards on either side of the 2 of Coins? It may be noteworthy that this card is between them. I don't "get" Hillary Clinton as Queen of Coins, otherwise I'd take a stab at idea that something might cause she and Joe Biden to swap jobs. That's probably too outlandish....but who knows? The cards sometimes do relate well to their absolutely literal meanings - so widening it a little - a prominent male swapping jobs, or replacing, a female - or vice versa. Hmmmm - back to Queen Elizabeth stepping down and being replaced by Charles or William. 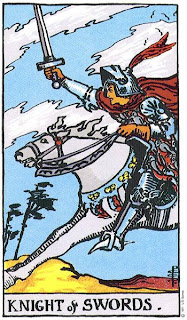 Knight of Swords: would relate to Princes Charles or William if the cards have indeed lurched across the Atlantic for me. Otherwise, we have seen Knight of Swords before in my set of tarot experiments - he appeared in relation to Joe Biden, and I identified the card as Biden then. Joe Biden will naturally be in the news quite a bit as the new Vice President, but here he'd be drawn to attention in a special way - something he will do or experience over and above regular duties, perhaps something more personal - anyway, a big news story with him as the lead player. Swords relate to the element of Air in astrology, so though the Knight of Swords can relate to a military type, the way the stereotype operates is via mental processes - cutting through murky situations with sharp intellect.

Nothing from those cards seems nearly as dramatic as I'd expected. The spread might well relate to one specific incident, here or abroad, involving the two personalities in the court cards. Alternatively, the spread's apparent mildness could be an indication that 2009 will not be the horrendously dramatic year some people expect.

This is all in the spirit of experiment - I'll be keeping this spread in mind throughout the year, and reporting back!
Posted by Twilight at Thursday, January 01, 2009

Hmm...don't know enough about US politics to comment but the only thing that could sway the Queen to step down could be the death of Prince Philip. He has been in hospital in 2008 so it may be something more serious than the public has been told. Don't think William would take over because he has just signed up to doing 7 years with the RAF Air Rescue Service, so more likely to be Charles.

That of course brings up the BIG question of Camilla as Queen. Despite telling us that she would be known only as the Consort everyone knows Charles will insist that she is crowned Queen. The backlash would be considerable particularly from the Diana supporters.

Some astrologers over here have been making more noises about the end of the Monarchy as in the end of an era in England and the row over Camilla could be the last straw for a lot of people.

So we'll have to see how your experiment works out.

Rossa~~~ Hi - yes, if something were to occur this year, I suppose Charles would be in the hot seat.
Astrologers and psychics have been predicting for years and years and years (as long as I can remember actually) that Charles would never be King. Most of those who predicted it are probably dead now though, so they wouldn't be embarrassed. ;-)

I reckon the end of the British monarchy any time soon is about as likely as the USA splitting into 4 countries in 2010 (as predicted by a Russian professor the other day).

But these are strange times and we'd best be ready for anything!
:-)

I saw one American psychic has predicted that Bush & Co will go to war with Iran to support Israel, will declare a national emergency and delay the inauguration, possibly permanently...which just goes to show the lengths people will go to when the one they don't like looks like getting the ultimate prize!

Rossa~~~ sigh. There were predictions that Bush & Co would do something like that to delay the election - didn't happen though. Some psychics have a vivid imagination and an over- pessimisitc outlook !

But as I said, these are strange times.

I suspect Bush will be more than happy to walk away from his post to a trouble-free retirement in Texas, chortling about the mess he has left for Obama to sort out.

Pay attention to what Obama said on his Jan 20th speech, "The Ground has indeed Shifted" --- and "Holding some accountability." for the inauguration.
Take notice that he's been VERY BUSY, hence the Knight of Swords swings quickly to action during the first 100 days in office.

Ananymous ~~~ Hi, and thank you for leading me back to this post, which I admit I had temporarily forgotten!

Yes, your interpretation would fit nicely. I'm wondering now whether Sarah Palin migh fit Queen of Coins. Coins are kind of conservative I guess. I don't know. But is she important enough?
she's in the news (again) at the half-year point anyway! :-)