Of Jupiter, Aquarius and Me

In several hours Jupiter will be rolling into Aquarius. The last time Jupiter visited the sign and exactly conjoined my natal Sun was in February, 1997. He brought me luck then. It was the exact time when I found a new place to live. We'd spent over a year in an apartment which was uncomfortable and totally unsuitable for us, after having lost everything when our previous apartment and all possessions were destroyed by fire. I found a nice house to rent, and still clearly recall the helpful lift of spirits at that time.

During the same year though my mother was diagnosed with lung and brain cancer in June, in mid-August she died. She left me her small house on the coast. I hesitate to describe this as lucky, because my mother (and I watching her) suffered terribly, but the year brought me a house which later on became home for me and my late partner, after I retired.

Each Jupiter conjunction with one's Sun occurs amid a different set of planetary aspects to other parts of the chart. So these events can't be taken in isolation. It is of interest to note them though. My natal Jupiter is in Pisces, one of its traditional rulerships, and it lies exactly semi-sextile (30 degrees from), my natal Sun. I'm not sure whether this makes its once-a-decade visits more significant or not.

A previous Jupiter transit of Aquarius, in 1985, also brought both bad news and good news. Mid-year I was told I needed a hysterectomy. There was one exploratory hospital stay and another for the operation. The good news was that there was no cancer, only fibroids, and my operation and recovery was very easy. The surgeon called me his "star patient" due to my rapid recovery. At the time of the operation, in September Jupiter was retrograde, and within a degree of my natal Sun! Life and health improved dramatically during the rest of the year. 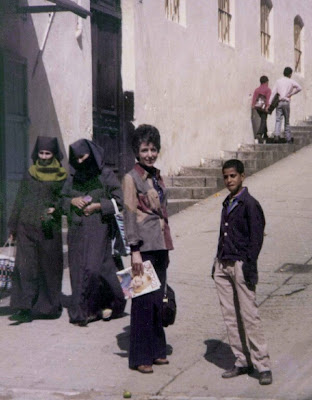 I can go back around another 10 years to the time when Jupiter conjoined my Sun in November 1973. I entered a national competition in the UK at that time, but cannot remember the exact date. It was one of those competitions, then so common, where the task was to make up reasons for buying such-and-such product. In this case the product was Yardley perfumes, the competiton appeared in a now defunct magazine called "Over 21" (which I'm clutching in the photograph). We received the good news that I was the winner in late January 1974, and took the prize at the end of April - two weeks' holiday, VIP accommodation with spending money, in Tangier, Morocco (North Africa). Later the same year I had a couple more, smaller, competition wins.

So..... this time around, as Jupiter pays me a visit once more, I'm keeping a very open mind. The conjunction with my Sun will be exact in the first week of February. One thing I'm feeling already is that my frozen shoulder is very slowly improving, though it's too early to say there's a Jupiter connection. I've been bothered by it for around 6 months, it ought to be due for improvement any time now.

An added attraction (?) this year is the solar eclipse on 26 January which will hit my natal Sun within 10 minutes of arc. It misses my birthday by a day. Last time this happened was in 1990, and I don't recall anything significant then, or during that year. No doubt there were some minor events which the eclipse could have triggered, but they can't have been important enough for me to commit them to memory.

I'll be keeping an astro eye open for several months on both the Jupiter and eclipse fronts, and report back, should anything remarkable occur.
Posted by Twilight at Monday, January 05, 2009

Thanks for sharing such enlightening and moving Jupiter material. You really must remove the "I'm not an astrologer" dislaimer--I think you're one of the best!

I'm really looking forward to the next few weeks. My solar return (50th)is 3 Feb and it's going to be a bit busy. First the Solar Eclipse, then first week Feb I've got Neptune, Chiron (my Chiron return), Jupiter all conjunct my Sun! Right next door in immediate vicinity there's Mars and Mercury in Capricorn with Pluto lurking around as well. Then the Lunar eclipse to come. What a month it will be for us Water Bearers!

And I've just done my progressed chart for the first time and found a Earth Grand Trine as part of a Kite. So now I've got to go and learn what that means.....LOL

Like you, I'm not an astrologer but I'm trying to get my head around it.

Anonymous (Julie) - That's very kind of you, too kind! I try, and mostly I "follow my nose" :-D
Thanks for visiting.

Rossa ~~~ Yes it'll be interesting to see what turns up!

I avoid progressions and stick to transits, Rossa - I try to keep things simple. Otherwise the scene gets filled with possibilities and probabilities, and the view becomes ever more murky and tangled. This is a personal choice, that's all. I just don't like the thinking/logic or lack of it behind progressions.

Auspicious times for you, T, if the past examples are the guide.
Who knows?
Keep us all posted.
I love the pic.
Did you keep the house on the coast?
XO
WWW

WWW ~~~ No, keeping it would have stretched finances a litle too far at that time - and it was lucky I sold it. I got a very very good price. The value will have dropped considerably by now I think. My parents would be so pleased about it, I know it!

Yes, I have all antennae out for signs of Jupiter at work, and shall report all sightings :-)

I enjoyed reading your Jupiter in Aquarius stories

Thank you for your insight. I can see that too much info could cloud the situation. Finding the Kite/Grand Trine was fun as there is also one in my best girlfriend's chart, though hers is Water/Earth and mine is Earth/Water.

We are already "opposites" in that she has Pluto opp her Mars and I have Pluto opp my Venus. You can see this easily in each of us as people and we complement each other very well. They say opposites attract and in this case it is certainly true.

I've done my transit chart on astro.com, but there is one thing I would like to ask you. Where do you find out about the meaning of transits? Do you use a book or is there a resource on the net?

And I hope you washed your mouth out with a good glass of wine or whatever falling down water you prefer!

Anonymous (Kingsley) - Hi!
Thank you for reading and kindly commenting! :-)

Rossa ~~ There's a section about transits at Cafe Astrology

I've used that in the past, and a book I have called "Planets in Transit" by Robert Hand. You soon get into the habit of working interpretations out without looking them up though, as long as you know the characteristics of each planet, sign and house, it's a bit like an equation in algebra :-)

I generally only note the slower moving transits (conjunctions and close aspects). These are the ones most easily identifiable I find.

I think it was astrologer Grant Lewi who said that throughout our lives we become accustomed to the visits of the faster-moving planets, and after a certain point hardly notice them, but the slow-movers present something new and noticeable, because they come around rarely. :-)