HBO threw up the movie "I'm Not There" the other night - we caught it. It's a peculiar brand of bio-pic on the life and times of Bob Dylan. People who like Fellini, surrealism, abstractions and suchlike, as well as knowing Bob Dylan's body of work and life story quite well, would probably enjoy the movie. It was directed by Todd Haynes. We struggled to keep up!

I was a fan of Dylan's lyrics back in the day, but was always uneasy about Dylan the man, he was a bit of a mystery. This movie partially solves it. If nothing else it goes some way to explaining his astrology.

For an article on Dylan by a professional astrologer I'd recommend
Neil Spencer's piece - see here.
I'm adding my own two penniworth in connection with the movie "I'm Not There" which hadn't been released at the time of Neil's article. 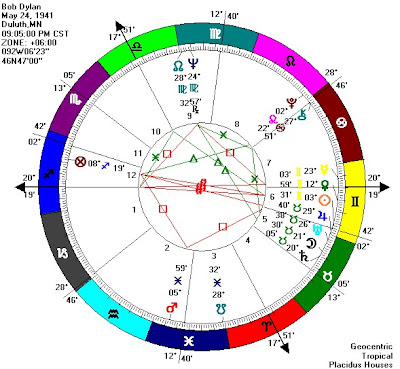 The movie depicts Dylan as a group of six different personas which develop throughout his life and career. 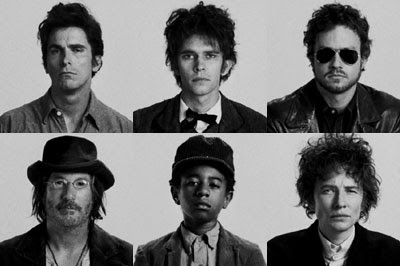 First he's a runaway black child with a guitar and the spirit of Woody Guthrie, I like this persona best of all, but it's not really his essence. In his natal chart the Woody-like persona is reflected most by the Taurus cluster - earthy, real, sincere. He evolves into a linked pair of facets - an evolved Taurus - the "real" man with his lovers, children, homes, and on the other side the musical phenomenon we knew best: awkward, uncommunicative, slippery, but with a certain genius - his Gemini side.

A fourth facet is explored briefly, his literary side, in tribute to his idol French poet and anarchist Arthur Rimbaud. This could be said to link to natal Neptune, which although a generational planet, in Dylan's chart is very close to North Node of the Moon, a sensitive chart point. It links to his ever fertile writing talent - imaginative, creative Neptune is in helpful trine to his four Taurus planets.

Two later facets of Dylan develop. He is depicted as a Born Again Christian, possibly reflected in his Sagittarius ascendant, Sagittarius links to religion. And finally as an ageing Billy the Kid. I found this to be the least convincing facet of all. It perhaps could be linked to his Mars in Pisces squaring Gemini Sun. Mars in Pisces seems to me to be the odd one out in his chart which consists mainly of a large Taurus/Gemini cluster, one sign blending into the otherwhen Jupiter @ 29 Taurus meets Sun @ 3 Gemini.

The question I was left with, and which I'd never thought to ask before: was Bob Dylan sincere in his early protest songs, or were they cynical money-making opportunities? I regret to say that I suspect the latter is true. A line in the movie brought it home to me. A British reporter asks him if he really meant those protest songs, and he replies "What if I thought I could do them better than anyone else?" These were the movie-maker's words, not necessarily Dylan's, though they may have been culled from an old recording, I don't know this. But the words rang true enough for me. However, whether or not the words were sincerely felt by their author doesn't detract from their meaning to an audience. We attach our own emotions, at the time of listening or reading, to the words of poets and lyricists, irrespective of the writer's own motives.

A Rolling Stone review of the movie probably gets the point of it all far better than I did.

A lot of the credit for the movie's success must go to a surprising and inspired piece of casting which helped to hold our interest throughout - Cate Blanchett as the quintessential Bob Dylan, the musical phenomenon (she's at bottom right in the group of 6 photographs above).

The real Bob Dylan, then and later.... 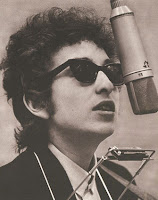 His "Masters of War" with appropriate images added - I hope, that in this song, he was sincere.

Yes a good movie, T. I don't think anyone will every fully understand the man, there are too many layers, too many reinventions.
XO
WWW

WWW ~~~ Yes, certainly an Odd-bod, he made certain nobody would put a label on him! I did, just then though. :-)

I just enjoy the music and, of course, the lyrics... But now you've made me wonder about the motives. Aaaarrrgghh... or not?

He's the only one who knows for sure, Black Cat - and he ain't tellin" !

I'd disagree with you about the motives behind Dylan's protest and social awareness tunes. They're legit. However, if you listen to him in some of the early interviews and in some recent interviews, it becomes obvious he early on grew weary of having people looking for hidden meanings behind every word he wrote. At the same time, in interviews in which he isn't trying to play Bob the Chameleon, you also see the emotions were - and are - genuine.

Another thing to remember about Mr. Zimmerman - many of those "eras" he went through were characterizations that others drew about him and his behavior - not so much what Dylan was, but what others wanted to "think" Dylan was.

Part of the Dylan mystique is that all he really wanted to be was a rock 'n' roll star, but he couldn't escape his genius with words and images. Those aren't affectations, they are a gift.

I didn't come to any hard and fast conclusion about Dylan's sincerity - not really. I was led, by the movie we watched, to question soemthing I'd never before even thought of questioning. I'd always taken it for granted that Dylan meant what he'd written. This move, produced by someone who was far more informed than I am, seemed to shed some doubt, which made me question.

Also, I seem to remember reading something not too long ago which hinted that Bob is conservative at heart. Now that may well be someone's jaundiced and mistaken opinion, and nowhere near the truth, but it probably coloured my judgment when watching the movie.

Perhaps it's the movie makers who are the cynical money-making opportunists here! That's quite likely.

I don't think it matters terribly though whether Dylan was always sincere in his protest songs. As long as they mean something to the listener and to others who perform them, for me that's all that matters.

Yes, I do think there's a "conservative" Bob Dylan amidst all the other Dylans. Isn't that the fate of we Geminis - we always want to be EVERYTHING!!!

A P.S.:
I've always thought the theme song for Geminis is Kris Kristofferson's "The Pilgrim: Chapter 33." And of course, Kristofferson was born June 22. Hmmmm.

TNPOTUS ~~ LOL! Yes indeed - Gemini loves to spread it around!
A lot depends on the rest of their charts as to how far and in what direction!

Kris Kristofferson is a hero of mine. I fell out with him only once, when he appeared to support the IRA during the Irish "troubles" back in the 70s.

Yes, "The Pilgrim" well describes the definitive Gemini, you're right!

Kris has Sun in Cancer, but that's a good thing, because it brings in sensitivity. I seem to recall you have some Cancerian emphasis in your chart too.

I think I'll do a post on Kris. I've got George Michael lined up for Monday, so perhaps later next week then. :-)