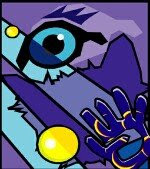 On the topic of prophecy British astrologer C.E.O. Carter had this to say in his Encyclopedia of Psychological Astrology (in print continually from 1924):

PROPHECY
It is probable that such prophecy as may truly be the result of inspiration or revelation from higher entities would be shown horoscopically by a strong 9th house, and by Jupiter and Neptune, as well as sometimes Uranus. Such cases, however, are rare, and their possibility is admitted by comparatively few at the present day. Natives of watery signs and also Sagittarius are prone to have presentiments, but it is probable that in most cases these are purely fanciful.

Astrological prophecy, properly so called, has nothing to do with such methods, but depends upon the interpretation of present and future influences mathematically obtained and intellectually apprehended. At the same time it is undeniable that many astrologers, and particularly those with strong Jupiter 9th house influences, develop an intuitive accuracy of judgment that may in time act so promptly and surely that it may appear to partake of the nature of inspiration.

On the other hand, those in whose horoscopes Mercury and Jupiter are afflicted should be cautious in making forecasts, especially when under bad directions to these planets.

I flicked very quickly through Astrotheme's lists of well-known people with Jupiter (and other planets) in 9th house, and found a few well-known astrologers:

And I have a lonely Jupiter in 9th, as it happens!

Staying on the subject of prophecy, in Rome today, 15 January, marked the second day of a 2-day festival honoring the goddess of prophecy, Carmenta. The first day of Carmentalia was 11th January. Carmenta, as well as being a prophetess was goddess of childbirth and midwifery. There was originally one Carmenta who was worshipped by the "flamines," her priests. Later there were said to be many Carmentes, female deities who appeared to assist women in labor and to tell the fortune of the newborn child. Romans made offerings of rice to the goddess and feasted on cream-filled pastries shaped like male and female genitalia or triangle-shaped pastries filled with raspberry jam.(Link)

Carmenta (known as Nicostrata to the Greeks) was famous for chanting her prophecies in verse. 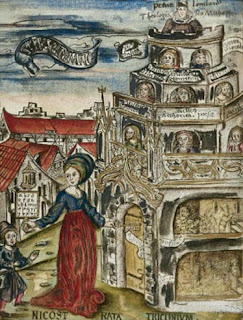 She is also credited with naming the Palentine Hill and in a vision predicted it would be the future site of the Roman Empire. She laid the city's first stone, instituted a system of laws for the surrounding region, and invented the Latin alphabet and language. Quite a gal!

Illustration, right: ‘Typus Gramatica’ showing Carmenta/ Nicostrata holding a hornbook and key, introducing a child into a tower of learning with six storeys. 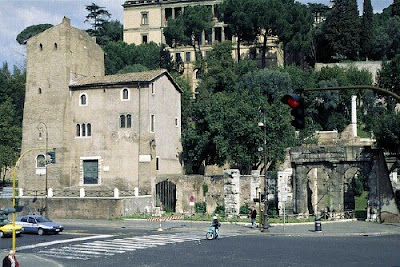 The arches to the right of the photograph form the remains of the ancient gateway Porta Carmentalis, close to the site of Carmenta's temple at the foot of the Capitoline Hill.
Posted by Twilight at Thursday, January 15, 2009

And we so need to return to the goddess, the feminine, T, don't we?
A great post, very inspiring.
XO
WWW

WWW ~~~ We do, yes - at least to get back to feminine principles. As long as they are embedded in the majority it doesn't matter which gender - I like a few males around ! ;-)