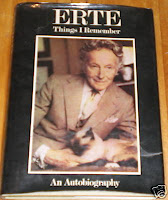 Erté. Not a universally well-known artist, but once seen, his work is easily identifiable. I first became aware of him via, of all things, a Franklin Mint catalogue, back in the UK. We used to be inundated with those catalogues! At one point they offered a set of decorative plates featuring Erté's artwork. His is a distinctive style from the Art Deco years, 1920s to 30s. I see in it also a trace of the previous era's style - Art Nouveau. The sinuous delicacy employed by Erté isn't usually part of true Art Deco. He's a crossover! Oddly, I see a trace of Aubrey Beardsley's style too. 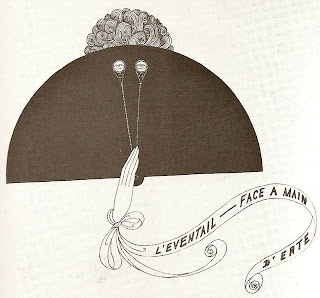 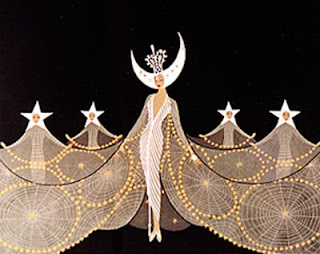 Erté was the pseudonym of Romain de Tirtoff (or Tyrtov), born in Russia in 1892, moved to Paris, France in 1912, and died at age 97 in 1990. His career as illustrator, theatrical stylist and fashion designer, spanned nearly all of those ninety-odd years. The name by which he became commonly known, " Erté", is the French pronunciation of the initials of his real name R and T (air-tay). 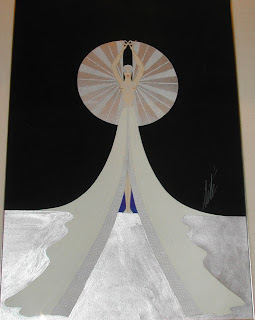 There's little detail on-line about Erté's personal life.An article in "TIME" from 1982 gives the most I've been able to discover, apart from the nuts and bolts of his career.

In 1926, when Erté made an electrifying appearance at the Paris Opera costume ball, he was dressed in a toreador outfit of varying shades of gold lame. "That night," he recalls, "the huge cape I designed was completely lined with fresh red roses which I tossed, one by one, at my audience as I descended the grand staircase." 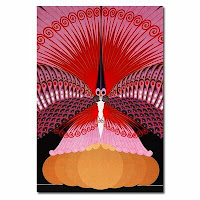 "For all his theatrics, Erté has always been a prodigiously hardworking artist who, for nearly seven decades, has spent virtually every night, all night, at his desk. He habitually sketches and paints in a dark room under a single spotlight, listening to recordings of Beethoven and Schubert. 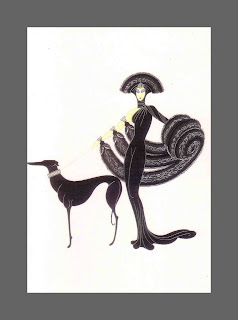 Since 1935 he has lived in an apartment in the Bois de Boulogne in Paris, with a succession of cats as companions. "Being alone is vitally important for me and my work. I'm like a cat, solitary, independent and quiet by nature," he says. To keep in shape he works regularly with weights, even carrying a light set in his briefcase. Says he: "It's almost a duty to keep your body svelte—for other people's sake."

A blog called "Gay for Today" featured Erté in a piece last November, and notes that

"In 1975, he published a memoir, Things I Remember: An Autobiography. While discreet, the book is frank about the number and nature of his romantic liaisons, including descriptions of the homosexual demi-monde of 1920s Paris." 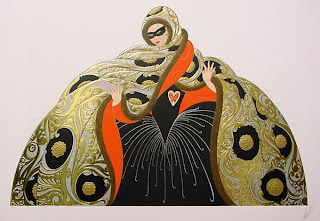 Unlike Tamara de Lempicka or Augustus and Gwen John who appeared in two previous Arty-Farty Friday posts, Erté managed to avoid scandal, as far as I can tell.

Born 23 November 1892 in St.Petersburg, Russia. No time of birth known, the 12 noon chart below will show an inaccurate ascendant and degree of the Moon, but Moon would remain in Capricorn whatever the time of birth. 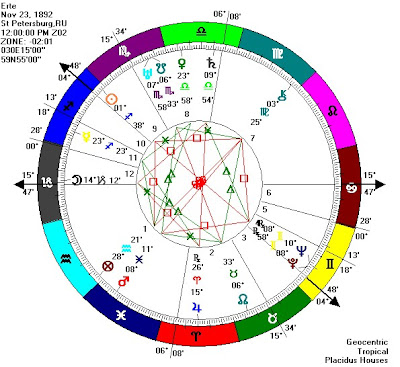 Where is the "special" placement or aspect in this chart which could account for Erté's work standing out from that of the crowd? 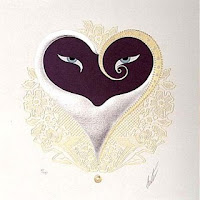 Sagittarius Sun and Mercury link to his over-the-top love of excess, as described in the "Time" article already quoted. His artistic talent no doubt connects to Venus ruler of the arts in Libra, one of Venus's home signs. Saturn also in Libra emphasises that sign of beauty and balance.

Moon in Capricorn brings in a more down to earth feel to things, and reflects his dedication to work and business also mentioned in the "Time" article.

Neptune and Pluto were conjoined in Gemini for quite a few years in the late 19th century (1885 to1897) including the year Erté came into the world. This period spawned several well known artists - Georgia O'Keefe, Norman Rockwell, Tamara de Lempicka, Joan Miro among them. 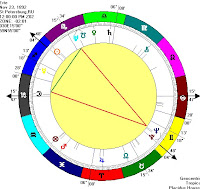 In Erté's natal chart it'd be a good bet that, even not knowing time of birth, the Moon in Capricorn and Uranus in Scorpio formed a Yod configuration with the Neptune/Pluto Gemini conjunction at the business end. Neptune, the planet of creativity blended with the transformative power of Pluto combined to make a force to be reckoned with, especially when linked to personal planets in a natal chart. In a Yod two quincunx (150*) aspects linked by a sextile (60*) form a sharp pointed triangle or arrow shape, the engergies of the two planets in sextile are said to be focused through the planet(s) at the Yod's apex. In this case "energies" of the Moon sextile Uranus (depending on birth time, but more likely than not) bringing about a sensitive but rather avant garde blend focused through the powerfully creative mix of Neptune/Pluto in communicative Gemini. 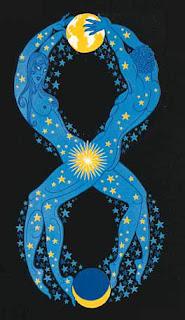 I feel pretty sure that this is what made Erté special. Pluto, at the time in question was also conjunct Aldebaran one of the "royal" fixed stars, which might also have significance. 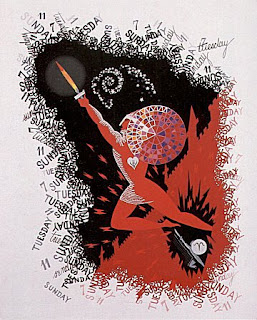 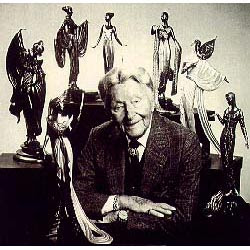 One of his posters - this more typically Art Deco in style: 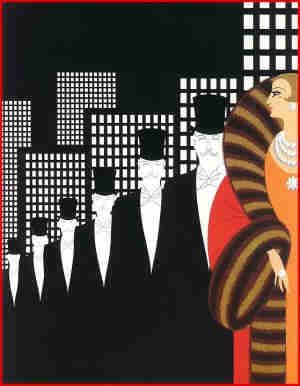 You dig up some amazing people, T. No pun intended!!
I've never heard of him but am so glad you introduced me to him, imagine that cape with the roses. Oh My.
XO
WWW

I admire and enjoy your site tremendously. You're doing something like what I aspire to do, only you're way ahead of me.

WWW ~~~ Glad it caught your interest! LOL! Yes, the roses!
I immediately thought of Liberace.
:-) I could imagine him doing something similar.

mark shulgasser~~~ Hi Mark!
That's very sweet of you, and much appreciated. I hadn't seen your blog "Gemini And...." before but will add it to my links, and visit you. :-)

Never heard of this one, but I liked the art.

I think you forgot his sun opposite neptune and pluto, not to mention mars in pisces.

I think this, combined with his expansive and imaginative sun in sagittarius and libra placements made him ethereal.

Anonymous ~~ Hi. Yes, I should have mentioned Sun opposite Neptune/Pluto. There's so much in his chart that could contribute to his success, so to keep things fairly brief I picked out what I thought to be most "special" about it. Thanks for your input. :-)