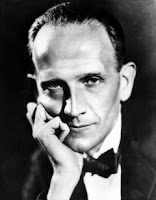 Today, 18th January would have been the birthday of A.A. Milne. He was born in London, England in 1882. His was a very Earthy natal chart: Sun, Moon and Venus in Capricorn. Saturn, Neptune, Jupiter and Pluto in Taurus. Uranus in Virgo. Air enough to crank up his writing skills came from Mercury in Aquarius and Mars in Gemini. A Grand Trine in Earth links Uranus to Neptune & Jupiter to Venus, perhaps to Moon also. (Chart is set for 12 noon in absence of a known birth time.) 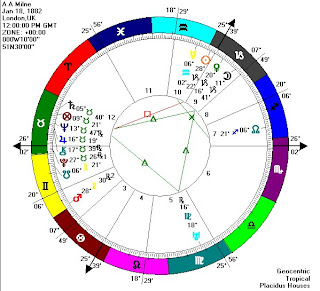 A.A. Milne's best known books were written for children. The adventures of Winnie the Pooh, Christopher Robin and their friends have delighted generations. They contain depths of wisdom we could all use these days. For instance, today's doom and gloom merchants and their victims could take note of these two:

'Supposing a tree fell down, Pooh, when we were underneath it?'
'Supposing it didn't,' said Pooh.
After careful thought Piglet was comforted by this.

It's snowing still," said Eeyore gloomily.
"So it is."
"And freezing."
"Is it?"
"Yes," said Eeyore. "However," he said, brightening up a little, "we haven't had an earthquake lately.


And I find this one very true to life, very often, when writing the blog! 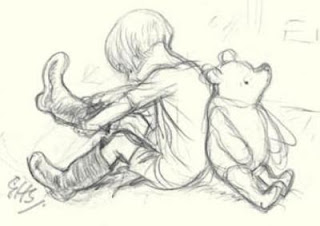 When you are a Bear of Very Little Brain, and you Think of Things, you find sometimes that a Thing which seemed very Thingish inside you is quite different when it gets out into the open and has other people looking at it.

(Illustrations by E.H. Shepherd, whose lovely work adorned many of A.A.Milne's books.)
Posted by Twilight at Sunday, January 18, 2009

Last weekend it was announced that there is to be a sequel written by David Benedictus, called Return to Hundred Acre Wood, more than 80 years after the House at Pooh Corner was written.

One of my favourite children's books, my favourite character being Tigger, always bouncing around everywhere, just like me...also matched my red hair!! I've got a Tigger stuffed toy that was given to me years ago by an ex-boyfriend.

My sister got stuck with Piglet as a nickname after an Aunt of ours made her a stuffed toy to resemble Piglet. The things adults do to us poor children!

PS Check out my further comment on WWW's blog about new rules for astrologers in the UK. A follow up to the one I made about the bus in UK with the "There is probably not a God" poster. The UK has changed a lot in the last few years.

Thanks for posting this. I had no idea what Milne looked like. I'm wondering if all those planets in Earth signs helped him or influenced him to write about animals in such a meaningful, humorous, and charming way.

Rossa ~~ Thank you for that link.
I'm a bit doubtful about the idea that anyone could successfully write a sequel though. We'll see!
It seems akin to all the movie re-makes we're seeing lately - where are the new ideas ? The originals are golden - leave 'em alone, I say. :-)

Oh dear, so they're gettin' at the astrologers again are they? What do they mean "for entertainment only"? What is life for if not for entertainment ? Grrrr!
Next thing they'll be doing is giving us a list of side-effects, as they do in ads for pharmaceuticals over here.;-)

Adele - Hi!
Yes, that thought occurred to me bout all that Earth in his chart, and his simple philosophies are so down to earth too!

Oh! Glad to hear that you knew of Erte, and enjoy his work. He's not exactly a household name on either side of the pond, it sems.

Oh I so love "A-Squared" as we used to call him in school.
Never did see a pic of him until now.
A sequel? Shee-ite. Leave the man and all such like him alone I say.
XO
WWW

Agree about sequels (unless by the original author) and re-makes... the classics ought to be left alone, like a beautiful antique!

I was never really 'into' Milne. Kenneth Grahame was more to my taste. 'Toad' was always one of my favorite characters.

To be honest I always loved Ruert Bear and Bill Badger best of all (pleb that I was/am) - no connection to either Milne or Graham. I loved the little rhymes and the pictures and the prose - three for the price of one.
a canny Yorkie you see. And there was the origami too! :-)