So far, I've been ignoring the Republican presidential candidates in this blog. Today I'm going to redress the balance, and, as I'm not an astrologer, I don't need to remain objective - I can be as partisan as I choose.

I'm not impressed by any of the Republican hopefuls, their opinions are directly opposite to my own in every area. I find it almost impossible to believe that they are being serious when they state their views on any topic.

I hear titters from the back of the room as I angrily pound the keys. A warning from HeWhoKnows, who can tell from the rhythm of my fingers that I am not pleased.

Mike Huckabee, former Governor of Arkansas, is a Baptist preacher, plays bass for a rock group and told Matt Taibbi, a writer for "Rolling Stone", that he has "jammed with the likes of Percy Sledge and Grand Funk Railroad, and how he prefers John Entwistle to Flea's slap-and-pop style of bass-playing."

Mike Taibbi's article for "Rolling Stone" is well worth reading. He defines Huckabee as "The latest It Girl of the Republican presidential race".

There has been a mini surge by Republican voters towards Huckabee recently, and he has even tugged at the heart strings of a few middle-of-the-road Democrats. It's all down to his rather more compassionate veneer, something lacking in other conservative candidates. He's smiley, witty and is not quite as charismatically challenged as his colleagues. He appears to have feeling for the poor and under privileged and actually does try to follow his own church teachings - but only up to a point. His views on abortion, gay marriage and immigration leave a lot (everything in fact) to be desired.

Born 24 August 1955, Hope Arkansas. I can find no record of Mike Huckabee's birth time on-line, so this is a chart for 12 noon on his date of birth. 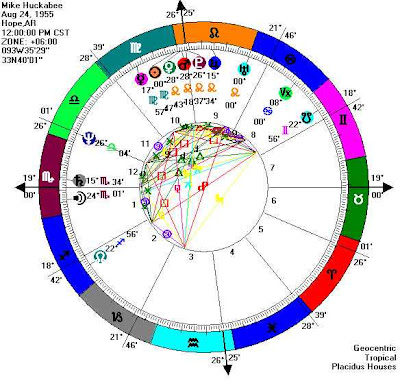 Uranus, Jupiter, Pluto, Mars and Venus all in Leo - a hot quintet cooled down by Sun and Mercury in Virgo.

All those Leo planets must incline him towards the public stage, be it pulpit or political platform. What would he like to hear - in his wildest dream? "Lights, camera, action!" Virgo Sun and Mercury are solid and sensible, nitpicking and critical, they probably find it hard to get along with his Leo-driven alter ego. I would like to know his time of birth to discover where this cluster of planets falls.

Natal Moon is going to be in passionate, somewhat paranoid Scorpio, along with Saturn, whatever his birth time. Neptune in Libra completes the set.

Jupiter and Saturn in Scorpio are in exact (to the minute) square aspect. Robert Pelletier ends his assessment of this aspect in his book "Planets in Aspect" like this: "Faith is your greatest ally when nothing else seems to work for you. It can sustain you through difficult periods and comfort you when you reach your goals with assurance that you have done your job well."

One thing Mike Huckabee does have is plenty of faith.

From Matt Taibbi's article linked above .....in a recent appearance at the Prestonwood Baptist Church near Dallas, he told audiences that Christians are sitting in the pole position of the race to Armageddon. "If you're with Jesus Christ, we know how it turns out in the final moment," he said. "I've read the last chapter in the book, and we do end up winning.""

"One of his first acts as governor was to block Medicaid from funding an abortion for a mentally retarded teenager who had been raped by her stepfather — an act in direct violation of federal law, which requires states to pay for abortions in cases of rape. "The state didn't fund a single such abortion while Huckabee was governor", says Dr. William Harrison of the Fayetteville Women's Clinic. "Zero."

Matt Taibbi tells us that, as president, Huckabee would support a constitutional amendment banning abortion and would give science a back seat to religion. "Science changes with every generation and with new discoveries, and God doesn't," Huckabee says. "So I'll stick with God if the two are in conflict." "

If Mike Huckabee were to become president, I think we'd have to find some way to leave these shores. And I'd best leave it at that.
Posted by Twilight at Friday, November 30, 2007

I'm an aquarian too btw. And lately I've been following my 'intuition' more (don't know if it's due to the fact I'll be turn 30 soon) but I get bad vibes off most of the republican candidates this time around year,
Giuliani especially...

check out glassbooth.org, it asks you what issues you think are most important and matches you up with the candidates that views best match your own.

Yes, I've checked the quiz at glassbooth.org, and wasn't surprised to find that I'm 94% in line with Dennis Kucinich, 91% Mike Gravel. Both those good men face a ridiculously hard road, and I hate to say it, but haven't a chance in hell of getting the nomination. Their voices need to be heard though - they are sowing seeds for the future.

Huckabee is as Republican as any other candidate, though less 'in yer face' than the likes of Giuliani.

As for the nasty comments, I find most of the "F-ers and blinders" steer clear of the more intellectual blogs for fear of being made to look foolish. They prefer their own types.

It may be a long time before America decides it is ready for a Kucinich or Gravel.

I think I'm sheltered from most of the rabid commentors due to writing about astrology - they wouldn't venture this far into "the unknown".

You're probably right about DK and MG - America has a lot of catching up to do politically, but I'll not give up hope completely that wisdom will prevail - and in my lifetime .

You are so gallant, kind sir!