Master of Space and Time

We have a special treat on the agenda this evening - Leon Russell, "The Master of Space and Time", a son of Oklahoma, will perform at our local theater. Son-in-law of He-Who-Knows was instrumental in booking this singer, songwriter, musician and his band to perform here, and the theater is sold out, an achievement in itself in this sleepy town.

Leon Russell has written dozens of songs, both for himself and other performers. "This Masquerade", "Roll Away the Stone", "Delta Lady", "Stranger in a Strange Land" are a few of the best known titles, not forgetting the most famous of all, "A Song for You", from whence comes the famous "space and time" lyric. Oddly it seems that many people think that this is Donnie Hathaway's song - wrong!

Here's an opportunity for a little astrological investigation. I found a couple of on-line reports of interviews with Russell, which throw some light on the kind of person he is. I'll relate some of his comments to his natal chart. (Sources linked at foot of post) 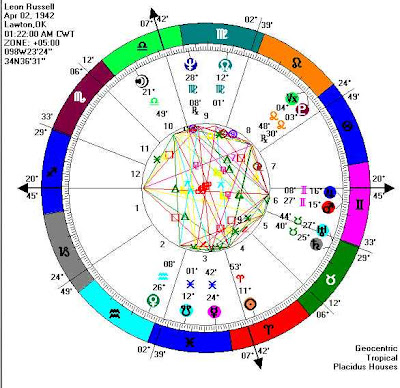 Interviewer: You've mastered the piano, trumpet, guitar and bass guitar. Most people only play one instrument. Did the guitar, bass guitar and trumpet come easy for you?

Leon Russell: The guitar was difficult for me due to a birth injury that partially paralyzed my right side. It took a year for me to be able to hold a guitar pic.

There is a Yod formation in his natal chart - Saturn sextile Mercury, both planets quincunx Moon, forming an arrow point with the Moon at it's tip. Fixed star Algol (traditionally known as a malignant influence) is conjunct natal Saturn at 25 Taurus. When I first noticed Algol's position I thought to myself, "Aha! Here's an example of Algol not having any ill effects." Then I saw the reference to Russell's birth injury.

"My major concern in high school was containing my neurosis about school not being the proper way to educate, which I found increasingly difficult as I went on. When I first started in school I was a straight-A student, and as I progressed -- my last year in school I failed three courses and just could barely make it to school at all. I gave up school when I had a chance to go on the road with Jerry Lee Lewis."

GRAND TRINE in Air - Moon/Venus/JupiterwithMars - Quick mind, sharp intelligence, clear objectivity - but Sagittarius rising : itchy feet and an unwillingness to be tied down.

"The last time he granted a lengthy interview, Russell mentioned that he enjoyed making people wonder about him, speculate and ponder his actions and motives, and his career suggests that he works overtime at inspiring that wonder...... Along the way, he has remained an enigma, masking himself first as a pompadoured sessionman, then as the mysterious Master of Time and Space, and lately as Country and Western songster, Hank Wilson."

NEPTUNE in Virgo opposing Mercury in Pisces - Communication with mystery and illusion in a push-pull situation. In addition, each planet is in the other planet's ruling sign - Mercury rules Virgo and Neptune rules Pisces - this is what astrolgers call mutual reception. Astrologer Noel Tyl puts it like this:"Mutual Reception in astrology occurs when two planets relate by the fact that each is in the sign ruled by the other; that’s time-share swap. And when the two planets in each other’s domain are ALSO in aspect, the wedding of energies can be magical dramatic." The same aspect has, no doubt, beautifully enabled Leon Russell's songwriting skills.

"I'm not an ecology freak... nor Women's Liberation. I'm almost totally politically inactive. I don't play benefits or any kind of fund-raisers. I prefer to play at hospitals, for people who otherwise can't see us. But I can't see playing for causes, unless it's specifically -- for instance, if it's my cause or some poor people's, I'll try to help. But you won't find me playing for any peace candidates --or any candidates.
Both economics and politics are false sciences. They're based on poor communication.............Capitalism itself in itself is a bit of a rip-off, as far as I'm concerned........"

Sagittarius rising - outspoken and direct. He says he's not politically active, but he oviously has very clear opinions about the subject! (I wonder why he wouldn't play for any peace candidates?)

"He was just weird enough, talented enough and pushy enough to accomplish what he wanted. With disarming ease, he transformed Mad Dogs and Englishmen into a showcase and giant stepping stone for Leon Russell. Still, he remained a mystery, a nonplus in a top hat and Holy Trinity shirt."

"It's easy now to tell that his introduction of the unexpected element has all along been the key to his success, lyrically, musically and personally"

Venus in eccentric Aquarius squared by Aquarius's traditional and modern rulers Saturn &Uranus conjunct in Taurus. Weird and fond of the unexpected? You bet! Pushy? Of course, with Aries Sun sextile Mars and Jupiter conjoined in Gemini.

Here's the famous "space and time" song -"A Song For You". Leon Russell has said:

"In the case of "A Song For You", I was trying to write a song that both Ray Charles and Frank Sinatra could sing. It's very nice to know that a moment from my past reaches the audience in such a way. When I was writing the song, there was a funny feeling in my chest as I wrote the lines "I acted out my life on stages, with ten thousand people watching". At that time, my largest audience had only been about 80."