Stars of the Debate & Divorce of the Week.

Two bandwagons continued their roll this week - the US presidential debates and the Mills-McCartney divorce. Good fodder for media and blogs - what would we do without this mayhem?

We watched the Democratic candidates' debate on TV, Tuesday evening, but came away with little new information. It seems to me that the candidates act like pre-programmed automatons, whatever question they are asked, their program seeks out the most appropriate response, often barely compatible with the question.

After a while I started to concentrate on the candidates' astrology (or what I could remember of it).

Joe Biden showed a nice bit of Scorpio punk and determination, I thought. To be honest, of the 7 individuals, I felt that he appeared the most presidential. A new insight for me!

Hillary Clinton was her usual hard-faced self - another Scorpio Sun, with a little too much of the scorpion and not enough of the eagle for my taste.

John Edwards and his hairdo were as smiley and do-goody as ever - typical Gemini Sun, trying to please everyone. He did take a pot-shot or two at his nearest rivals, it was nice to see the Goody-two Shoes image slipping for once.

Chris Dodd, another Gemini Sun, played his experience card once again (it's getting a little worn now). He plays hard on the fact that he has experience of "bringing people together" - Geminis are good at that part....but what then?

Bill Richardson, our 3rd Scorpio Sun option also keeps pushing his past negotiating experience in foreign parts. I wonder if he's angling for a position as the new president's Secretary of State ?

Barack Obama, the only Leo King on the platform, didn't look very regal on Tuesday evening. He also trotted out many well-worn phrases with hardly a new thought amongst them.

Dennis Kucinich, a personal favourite, the candidate without a snowball's chance, but with plenty of balls - the one who should be way out in the lead, was given but a fraction of speaking time compared with the rest of 'em. He did get the only applause of the evening though. He has Sun in Libra, with three personal planets in Scorpio. In a thinly disguised attempt to discredit Kucinich, the presenter saw fit to ask him a question in connection with Shirley MacLaine's book, in which she mentioned that Dennis once saw a UFO. Really important presidential stuff, this! Yawn. (See HERE) "NBC anchors Brian Williams and Tim Russert meticulously avoided following up on Congressman Dennis Kucinich’s three references to impeachment but somehow found time to grill the contenders on UFOs and what costume Barack Obama would be wearing on Halloween." Dennis handled the silliness with Libran grace, dignity and humor, I'm happy to say (but I'd bet that his well-hidden Scorpio bits were very annoyed!)

PS - also this (from the article by John Nichols, linked above):

"Frustrated by the refusal of Democratic leaders to set up a process for holding hearings on his proposal(to impeach Dick Cheney), Kucinich will use an arcane House rule allowing for the prodding of the process with privileged resolutions to try and force consideration. Once introduced, a privileged resolution must be addressed within two legislative days.

Kucinich is expected to offer his privileged resolution on Tuesday. He expects to continue pushing it until the House acts. That action is likely to be a successful move by Democratic leaders to table the measure. Such a vote could be instructive, however, in that it would provide a rare measure of the willingness of at least some House members to respond to the popular will — which is that Dick Cheney be held to account." 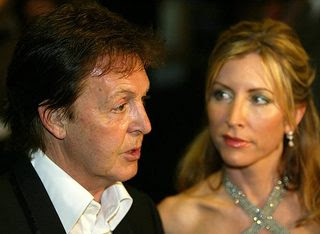 So, on to Mills v. McCartney. I'm not leaping onto the critical bandwagon - either way. And I'm not hauling out their natal charts either - it's been done before by competent astrologers. What I've done, is what I always do when I'm considering a question of relationships, I turn to Robert Camp's "Love Cards" book. Why? Because I've found that it works. It has connections with astrology, so why wouldn't it?


Their birthdays are 18 June (Paul) and 12 January (Heather). That, amazingly, is all the information we need to consult "Love Cards". Paul's birth card is Queen of Clubs ("The Mother of Intuition Card"). I've known one of these - my late partner. Lovely, warm and loving, intense with, when provoked, a fiery temper and very stubborn side. Heather's card is 2 of Spades( "The Friendship Card"). I don't recall ever meeting one of those.

Moving on to the compatibility rating for these two: the primary connection between them is coded CLR/CLF - which, being translated means -

From Heather's point of view, Paul is her "Lifetime Cosmic Lesson" - brief excerpts from "Love Cards":

"This person plays the role of 'teacher' for you in some fashion in your life.....a reminder of some great lesson that you must learn regarding your role here on the planet. For this reason you may not always appreciate their presence in your life. They may remind you of some of your own shortcomings, or play the role of a critic in some manner. .....associated with Saturn, but Saturn taken to a higher octave....these relationships can be difficult and heavy feeling."

For Paul it's the reverse of the above - he is the "teacher". "Even if you don't say anything, your presence in their life is teaching them invaluable lessons that they may someday express gratitude for. In the meantime there may be personality conflicts as these lessons are learned."

I'll refrain from giving my own opinion as to what lesson is being learned by this paticular "2 of Spades" !

The secondary connection is via Uranus. Paul is Uranus to Heather in the Life Spread. He wants complete freedom to be himself....she may experience this as his being unpredictable or unreliable.....he may scare her or leave her uncertain about his affections at times. The same influence could make them the best of friends, if freedom is allowed.

The primary and secondary connections are said to be the most significant, but there are others too. The overall rating for compatibility is better from him to her than from her to him. Him to her is a 3 (quite good), her to him is minus 1. Not an impossible match by any means, but a more challenging one for her.

(Introductory graphic by G.Grow)
Posted by Twilight at Saturday, November 03, 2007

Kucinich - the Best (by far) president Ever, that Americans will Never be allowed to have.

I have a feeling that his day WILL come.