I drafted a post about Cubism a few weeks ago, then decided it was too boring a subject for the blog, and abandoned it.

After reading Nick Kollerstrom's article on fixed star Algol featured last week in Astrology News, I decided to look again at my draft. It was pointed out in the article that Pablo Picasso, one of the creators of Cubism, had fixed star Algol conjunct Jupiter in his natal chart. 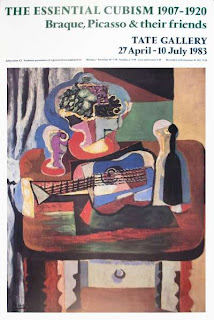 Whilst I don't necessarily see Cubism as being fired by any nasty Algol influence, it's interesting to note that Georges Braque, the co-creator of Cubism,and close friend of Picasso, had Algol close to his natal Sun.

The hallmarks of Cubism are the ’breaking down’ of form and space into geometrical shapes. Cubism broke from centuries of tradition by rejecting the idea that art should depict a single viewpoint. Instead they used an analytical system in which three-dimensional subjects were fragmented and redefined from several different points of view simultaneously.

After reading of the close relationship between Picasso and Braque, which lasted for a number of years, (described here at "Oh Pioneers!") I decided it'd be interesting to compare their natal charts.

"In the spring of 1907, Georges Braque visited the studio of Pablo Picasso for the first time. In the years that followed, the two artists, apparently so unlike in background, temperament, and possibly even in aesthetic, became essential to each other, forging a relationship that was part intimate friendship, part rivalry, part two-man expedition into the unknown. The young men were constantly in each other’s studio, scrutinizing each other’s work, challenging, stimulating, and encouraging each other. 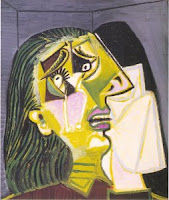 They went off to paint in different places and returned to compare results. They invented nicknames for each other, shared jokes and pranks, dressed up in each other’s clothes and took photographs. Along the way they invented a new language of painting that destroyed time-honored conventions of representation: they invented what came to be known as Cubism. ("Weeping Woman" by Picasso, left)" 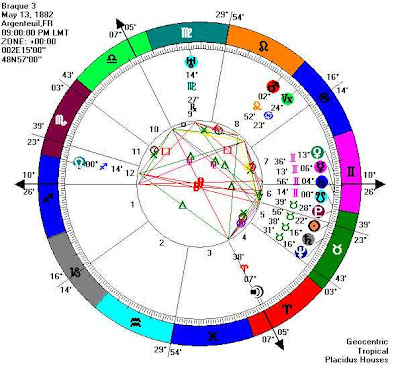 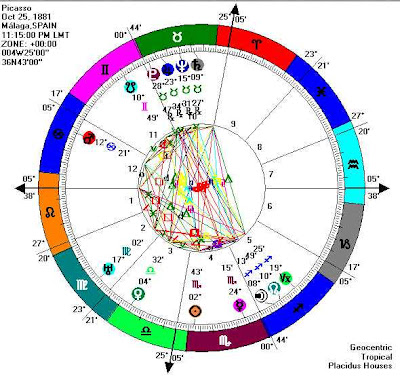 They were born around 7 months apart, so the outer planets (Pluto, Neptune, Uranus and Saturn) were similarly placed in both natal charts.

There's a cluster of four planets in Taurus in both charts. Taurus is ruled by Venus, planet of the arts. Pluto, Neptune and Saturn are all in Taurus, and in Braque's case his natal Sun is present too, in Picasso's chart Jupiter makes up the foursome, fixed star Algol is a part of the configuration in both charts, which may or may not be significant. 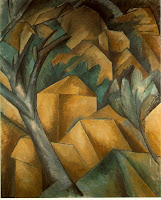 The two artists' natal Moons were in trine, in Fire signs, as were their ascendants, which probably compensated for some of the more obvious personality differences stemming from Sun Scorpio (Picasso), Sun Taurus( Braque), and the clusters of planets in Picasso's case being in 10th house - the public stage, whereas in Braque's chart most planets lie between houses 5 and 7 - much further from the spotlight. Picasso is still a name almost everyone recognises, whereas Braque is now familiar only to those with a particular interest in art.

Natal Uranus lay at 17 and 14 Virgo in the two charts, trining some of the Taurus planets in each case. The close relationship between Braque and Picasso began around spring 1907 coinciding with the time when transiting Uranus (planet of change, invention and innovation) reached 11 and 12 Capricorn and remained in trine to their natal Uranus positions for a few years, very likely until the time when the two artists went their separate ways.

It has been suggested that in working together, side by side in the same studio, they may even have worked on one another's paintings. After the two men drifted apart, their work became more distinctive.
(Man with Guitar by Braque, far right)

(Picasso's "The guitar Player", right.)After Picasso and Braque went their own ways they remained loyal to what they had shared during these years. They never betrayed what transpired between them.

I'd guess that transiting Uranus in trine with natal Uranus played a significant part in what went on between the two artists. When Uranus moved on, so did their relationship.

I'm not sure what it is about Cubist art that attracts me - the colours are neutral and sludgy - I like that, and there are lots of angles and subtleties which please my eye. I hesitate to venture beyond the superficial, it all seems too weird.

More of the work of both these artists can be viewed via Google Image.
Posted by Twilight at Wednesday, November 21, 2007