Emma Lazarus and her "Huddled Masses"

Yesterday's theme of immigration led me to
Emma Lazarus, the poet who didn't live to see one of her poems become a legend, gracing what is arguably the most recognised statue and symbol in the world: the Statue of Liberty.

Not like the brazen giant of Greek fame
With conquering limbs astride from land to land;
Here at our sea-washed, sunset gates shall stand
A mighty woman with a torch, whose flame
Is the imprisoned lightning, and her name
Mother of Exiles. From her beacon-hand
Glows world-wide welcome; her mild eyes command
The air-bridged harbor that twin cities frame,
"Keep, ancient lands, your storied pomp!" cries she
With silent lips. "Give me your tired, your poor,
Your huddled masses yearning to breathe free,
The wretched refuse of your teeming shore,
Send these, the homeless, tempest-tossed to me,
I lift my lamp beside the golden door!" (by Emma Lazarus,1883.)

Emma Lazarus was born in New York City on 22 July 1849, into a wealthy Jewish family.

From NPR
"Lazarus was a Sephardic Jew, a descendant of people expelled from Spain 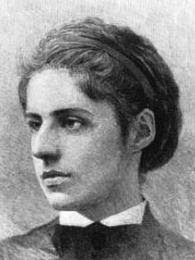 centuries before. She often wrote about the "Jewish plight" in her poetry. She was an early Jewish nationalist -- advocating for a Jewish state in Palestine as early as the 1880s.
Near the end of her life she became an advocate for disenfranchised immigrants, who were arriving by the thousands in the late 1800s. She wrote The New Colossus at age 34. Less than five years later she was dead of cancer, never knowing the impact her poem had on the nation."

Emma Lazarus started writing poetry at an early age and by her teens had a volume of poems published. She caught the attention of Ralph Waldo Emerson who became her lifelong mentor. Other than the famous poem above, most of her work has now sunk into obscurity. 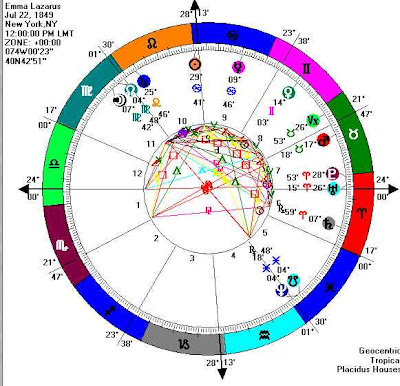 Her natal chart (12 noon version shown) indicates that Mercury (communication, writing) was in trine with Neptune (imagination), a most helpful aspect for a poet. There's also a square aspect between Saturn(history, tradition) and Mercury, which may be representative of her early poetic themes from classical antiquity, which appeared to fascinate her.

In common with the rest of her generation, Miss Lazarus had Pluto and Uranus close together natally, in Aries. In Emma's case these planets lay in square aspect to her natal Cancer Sun, which may connect to the challenge of her activism on behalf of the many Russian and European Jewish immigrants who arived in New York after the pogroms of the 1880s. Her natal Jupiter trines Uranus (the humanitarian and rebel planet) so, as well as challenge she had some astrological support in her efforts as an activist. Emma never married and little is known of her private life.

In today's political climate the words of Emma's poem seem somewhat hollow, but the principle expressed has to be seen a noble aspiration.
Posted by Twilight at Sunday, November 25, 2007

A noble aspiration, indeed, and written at a time when America represented hope for so many of the world's oppressed. One wonders if such times may ever return. If seems unlikely, but then there is an ancient Persian saying I remember in moments of gloom:

"In the hour of adversity be not without hope, for crystal rain falls from black clouds."

That's a lovely quote, RJ, and one I shall remember.

I wish the first thing that popped into my mind hadn't been words of Bob Dylan - "A hard rain's gonna fall" !

I'd like to think that in the event of some global catastrophe, that, yes, the USA would once again become in Emma Lazarus's words 'Mother of Exiles'.