It's time for mid-week uplift.

A booklet which accompanies the double CD album from which I took the track for the video, below, says this:

"John Denver always offered more than music. Once he caught your ear with a melody, he had something he wanted to share with you. Taken together, his songs come close to offering an integrated version of how life can be lived, as well as an invitation to get concerned about our world, and see beyond ourselves. His work was, and still is,an unfailingly upbeat celebration of life and its possibilities. He has never shied away from sharing what he felt and what he knew, nor has he shied away from exposing his tender and vulnerable side, no matter the cost." (Colin Escott) 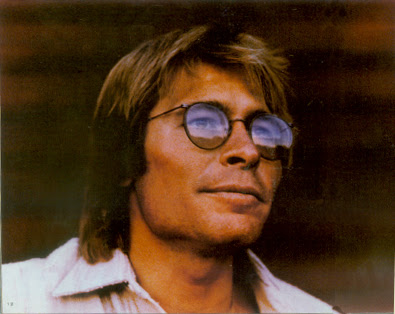 Astrologer Zipporah (Zip) Dobyns wrote about John's chart in 1997, "John Denver Flies On" not long after the tragic flying accident in which cost him his life 10 years ago. I hesitate to add anything to her scholarly assessment, but I will include a copy of John's natal chart here, the one in the linked article isn't too clear, at least to my own eye. 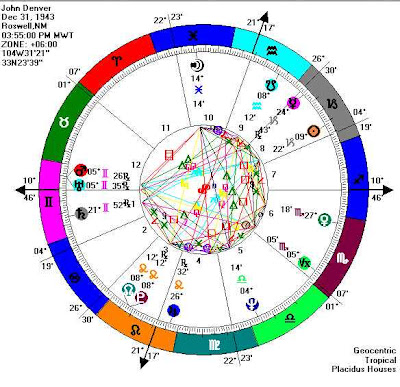 Pluto lies EXACTLY on North node of the Moon. I wonder if, for him, that was an ill-omen?

John travelled to China, Russia and Africa on missions of detente and mercy - his concerns covered nuclear power, nuclear arms and world hunger. He probably quietly did much more good than many of today's superstars who are regularly lauded for their efforts.

A man we could ill-afford to lose. His message is still timely:-

And the song that I am singing
Is a prayer to non believers
Come and stand beside us
We can find a better way.
(Words and music by John Denver)
Posted by Twilight at Wednesday, November 14, 2007