Nancy Pelosi has turned out to be one of my biggest disappointments to date as an example of a woman in power. She is the first woman to serve as Speaker of the U.S. House of Representatives. As the highest-ranking elected woman in American history, she is second in the line of presidential succession.

She has shown herself to be spineless, along with most of her Democratic colleagues, male and female. I expected so much more of a Sun Aries, whatever the gender - but I forgot about that stellium (4 planets) in Taurus. Stubborn? Ultra-stubborn! And supportive of the status quo.
(Chart for 12 noon - no time of birth available). 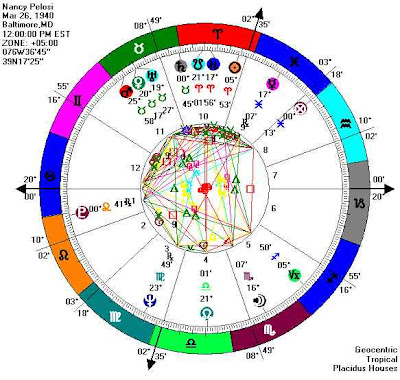 She has taken impeachment (of Dick Cheney and/or George W. Bush) "off the table" and remains determined, with John Conyers (chairman of the House Judiciary Committee, and a Sun Taurean) to keep it there.

attempt by Dennis Kucinich last week to bring the matter to the attention of Congress again with his resolution HR 333 (regarding the impeachment of VP Dick Cheney) could have been more successfully received with her support and encouragement. Instead it has been returned to the Judiciary Committee where they report that they are "too busy" to deal with it.

"For Dennis Kucinich, nothing and no one will suppress his allegiance to his country and to his abiding principle of strength through peace.

So when Speaker Pelosi tells the cowards in her House that “impeachment is off the table” because the fight to impeach is too hard, Kucinich doesn’t believe her. No one ever told him being a Congressman would be easy. No one ever told him maintaining democracy was a cinch. When the President and Vice President commit acts as egregious as lying the nation into illegal war, illegally surveilling their own citizens, endorsing and allowing torture, and more, the strong don’t stay quiet. It’s the weak, like Pelosi, Hoyer, Emanuel, Clyburne, Boehner, Murtha, Blunt, and over 400 others in Pelosi’s House of Wacks - Democrats and Republicans alike - who do......"
(From an article HERE)

Ms Pelosi's Mercury in Pisces sextiles Uranus/Venus in Taurus - soft, wimpy but very stubborn. Even rebellious Uranus isn't getting a look in, it seems. Saturn at 00 Taurus squares Pluto at 00 Leo, which one would expect to indicate a pretty powerful square-off between the powers of structure, rules and laws (Saturn) and transformatory Pluto - it doesn't seem to be working well....or maybe it does, depending on how one sees things.

I watched Ms Pelosi on TV last week hosting the Jefferson Jackson Dinner, when six of the Democratic presidential candidates gave speeches. She came over to me as a slightly nervous person, unsure of what she was doing, rather jittery. I was surprised. So very different from Hillary Clinton. I'm not a fan of Ms Clinton, due to the strings the corporations must surely have upon her after she has accepted all those huge donations, but I do have to admire her confidence and showmanship.

Nancy Pelosi might well be a delightful companion and a capable adminstrator in normal times, but times are not normal, and she is not fulfilling her duty. Anyone who can take the time to read articles and comments around the internet will have gathered that there has been an outcry from US citizens for impeachment proceedings to take place. E-mails, telephone calls and letters have in their thousands been sent to members of Congress encouraging them to support Congressman Kucinich's efforts. Nancy Pelosi could have been instrumental in leading that support - she failed. I believe she has failed her party's supporters, failed her gender, and failed her country.
Posted by Twilight at Tuesday, November 13, 2007

My two penneth on Pelosi, Twilight?

She's just another phony. She's bought & paid for by the most powerful lobby there is in the states.

I have to agree with Richard. When the Dems won both Houses last November, she seemed to cast the corporates aside, briefly. Her visit to Iran showed determination and some courage standing up to the administration. I was heartened, but shortly afterwards she was obviously 'taken aside and spoken to', for since then she's been the epitome of a wimp. I'm afraid it matters little who takes over in 2009 - the corporates are obviously sponsoring Giuliani and Clinton. Kucinich won't get a look in, unfortunately.

Thanks for the interesting blog Twilight! Pelosi does seem to have had her wings clipped at some point. I guess she said all along that she wouldn't consider an impeachment, though. Dennis Kucinich really is a great guy.

Thanks for your views.

You are probably right about the motivation of Ms Pelosi. Perhaps there are things we don't know about the situation. She's not looking after the Constitution very well - what about INTEGRITY!

It would be a much worse scenario we face without the likes of Dennis Kucinich speaking out. He give me hope. Perhaps not for any kind of success in 2008, but simply because he voices what so many people want to say about the current state of affairs. He truly speaks for us - not for what he can get out of it for himself. He does have support but it's not being given enough publicity. Even the liberal sites ignore him most of the time, except for Common Dreams.

The current scene is dismal. It's one I never expected to be facing when I came here 3 years ago. I don't actually believe in God as a person, but I do believe there's a force for good in nature and in the universe. When enough people put their willpower behind that force for good, and help it to function, things can change.

I'll not give up hope for better times in the future......yet!