Delving into my hoard of second-hand astrology books, lucky-dip style, I came up with "Astrological Keywords" by Manly P. Hall, who is described here as:

"One of the metaphysical giants of the Twentieth Century, Manly P. Hall spent decades researching eastern philosophy, occult studies, astrology, and a wide variety of related topics at a time when such subjects were still unknown territory in the western world. It is in no small measure due to his extensive writings and teachings that these subjects are so widely known today.

A prime example of the visionary Balsamic Moon type, Hall had Sun in Pisces, Moon in Aquarius. He earned an honorary Ph.D. in literature, was a 33rd Degree Mason, was a Rosicrucian initiate, and wrote over 200 books." 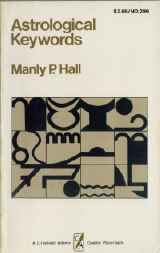 This book has been re-printed many times from 1958 onward, my copy is the 1978 version. It contains a treasure trove of astro information. I'm borrowing, here, from the last chapter, "Snap Judgment".

M.P. Hall tells us that "While a detailed analysis of character depends upon a profound knowledge of the science of astrology, the possession of certain fundamental keywords enables the student to arrive at remarkable conclusions, which, while not complete, will adequately demonstrate the accuracy of astrology."

Yes, and for me this kind of pencil sketch is often far more convincing than pages and pages of scholarly interpretation.

Mr. Hall provides 8 examples to illustrate his point. I'll borrow his snap judgments about three of the best known personalities he features.

Sir Francis Bacon
Aquarius rising with Sun opposite ascendant "spiritual and scientific progressivisim and diplomacy. Sun in 12th house: disgrace or imprisonment. Mercury conjunct Sun in 12th: the brilliance of his mind left unrewarded and obscured by the enmity of his contemporaries. Sagittarius on midheaven: high philosophical and religious attainments. Uranus in 10th house: erratic fortune and public place. Mars in Scorpio in 9th house: religious and political intrigue. This is an astrological sketch of the personality of Sir Francis Bacon, Chancellor of the British Empire and father of modern science.

Thomas Edison
Scorpio rising, a scientist. Leo on 10th house, a leader. Sun in Aquarius, a mind turned to Aquarian concerns - an inventor. Mercury in Aquarius, electricity. Neptune in Aquarius an inventor and investigator. Thus we may sum up the outstanding characteristics of Thomas Edison." (Inventor of the light bulb, among other things).

I didn't realise until I'd typed these that they're all Sun Aquarians. I looked quickly through the other 5 examples in the chapter and oddly there's another Sun Aquarian, an Aquarius rising, a Pisces rising, a Sun Pisces, and a Leo Sun with Uranus in Aquarius. The author, Manly P. Hall, had Sun in Pisces, Moon in Aquarius (as stated in his memorial above). I wonder whether there was a little astrological nepotism going on here? Or are Aquarius and Pisces, for some reason, best able to demonstrate the efficacy of snap judgments? Curious.
Posted by Twilight at Thursday, November 01, 2007

Get Your Personalized Astrology Reading and The "Practical Astrology" Book Now, 100 % FREE. GET FREE EBOOK NOW!