I feel certain that it has been said many times over the years, by astrologers, that 11 November is an astrologically appropriate date on which to remember those who fell in both World Wars. 11 November lies within the zodiac sign of Scorpio. In modern astrology Scorpio is ruled by Pluto, traditional astrologers had Mars as Scorpio's ruling planet. Scorpio represents, among other things, death. Mars rules war, Pluto represents transformation - death is the greatest of all transformations, apart from birth.

Whether we call 11th November Remembrance Day, Armistice Day, Veterans' Day or, Einherjar (the name given to 11/11 by followers of Asatru, Norse Heathenism), we remember and honour those killed in, or as a result of battle.

In the UK poppy emblems, symbol of remembrance, are sold for people to wear in their lapels, the funds collected go towards support of ex-servicemen. I don't know if this happens in the USA to the same extent, I haven't seen any evidence of it so far.

I "blog peace", the peace emblem remains here at all times, but equally I always used to wear a poppy around the time of Remembrance Day. I almost certainly owe my own life to those who died to win World War 2. What makes me sad (and lately very angry) is that the world hasn't learned the lesson those courageous men died to teach us.


THE INQUISITIVE MIND OF A CHILD

Why are they selling poppies, Mummy?
Selling poppies in town today.
The poppies, child, are flowers of love.
For the men who marched away.

But why have they chosen a poppy, Mummy?
Why not a beautiful rose?
Because my child, men fought and died
In the fields where the poppies grow.

The heart of the poppy is black, Mummy.
Why does it have to be black?
Black, my child, is the symbol of grief.
For the men who never came back.

But why, Mummy are you crying so?
Your tears are giving you pain.
My tears are my fears for you my child. 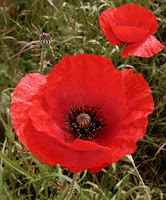 For the world is forgetting again.
(Author unknown)

"War would end if the dead could return."Stanley Baldwin
Posted by Twilight at Sunday, November 11, 2007

We celebrated it in South Africa as well. I still prefer the old hand-made poppies to the new plastic and printed paper ones.

the world must never forget, but more importantly... LEARN from the past! Too many useless senseless deaths.

I've visited you this morning - a lovely tribute to Gramps!