I'm not familiar with most of his work, but whenever I hear Jimmy Buffett's "Margaritaville", my spirits lift immediately, and stay high for a long time after, same thing happens with "It's 5 o'clock Somewhere", which he sings with Alan Jackson.

Yesterday morning the first voice I head was Jimmy Buffett's, ZIP - I immediately felt cheerful and optimistic! As I was at the keyboard I decided to look at Jimmy's natal chart, but first hazarded a guess at his Sun sign. Sagittarius, first choice, I thought. Or maybe Gemini. Wrong!

Jimmy Buffett was born on 25 December 1946 in Pascagoula, Mississippi. Astrotheme give time of birth as 1.08am. 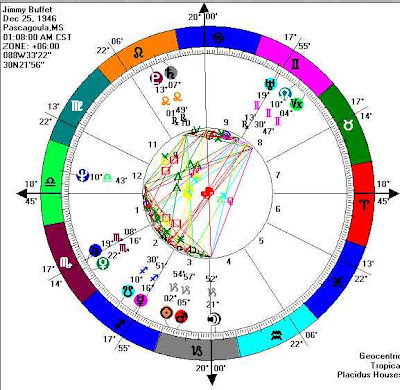 Sun, Moon and Mars in Capricorn (Sun and Mars conjoined). What a surprise! Mercury in Sagittarius though - I wasn't totally wrong. Mercury is opposed by Uranus in Gemini. there are two interesting configurations here.

1. A Yod: sextile between Moon in Capricorn and Venus/Jupiter in Scorpio, both quincunx Uranus in Gemini. Uranus is the business end of the Yod, and is also opposing Mercury in Sagittarius - so quirky forward-looking Uranus is seriously active in this chart, with the energy of the sextile focused towards it from Venus and Jupiter (music, publishing and luck) and the Moon (emotion and feminine energy).

2. A configuration made up of trines and sextiles with the Mercury Uranus opposition as its base. Interlinked trines and sextiles involve Pluto and Neptune, as well as Uranus, all in aspect to Mercury in Sagittarius - so the planet of communication is hooked up harmoniously with all threee outer planets. Here, probably, lie his writing skills (songs and books).

Whenever Jimmy Buffett comes to mind, so does the sea, the beach, good times, and no worries. The sea is obviously in his blood. His father worked in a local shipyard, his grandfather was a ship's captain. Natal Neptune (the sea planet) is at 10 Libra, 12th house (which is Neptunes own domain) and just 8 degrees from ascendant, so it holds a strong position in the chart. 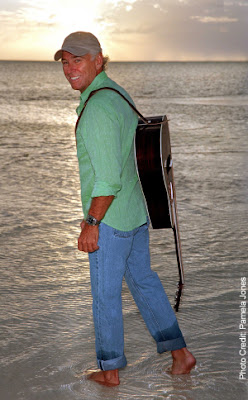 Posted by Twilight at Wednesday, November 28, 2007