Joe Biden is growing on me! I'll not be disloyal to Dennis Kucinich, he's still top of my heap, but Joe Biden comes a close second in the current line-up of Democratic presidential candidates. He, like Dennis Kucinich, is usually sidelined in televised debates, in favour of "the front-runners", but when he does get an opportunity to speak he makes it count.

When I first saw Senator Biden on TV, he reminded me a lot of Lord Louis Mountbatten. (Folks in the USA may not be familiar with Lord Louis - he was the uncle of Queen Elizabeth II's husband, Prince Philip. British Admiral, statesman and the last Viceroy of India. He was assassinated, in 1979, by the IRA who planted a bomb in his boat in the Republic of Ireland.) 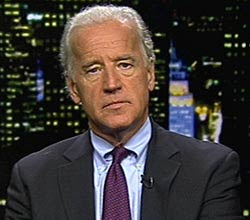 Until the last two TV debates featuring the Democratic candidates, I hadn't paid much attention to Joe Biden. HeWhoKnows commented that he always liked him, in spite of an unfortunate tendency which, in years gone by, came over as "shooting his mouth off". I saw a remark the other day which supports HWK's impression. Someone wrote that Biden has a shoehorn hanging from his bottom lip, ready for the next time he puts his foot there. Well, so far, so good, I haven't noticed this tendency in him yet, so perhaps he has mellowed with age.

I wonder if there's any significance in the fact that of the 8 Democratic candidates there are three Sun Scorpios, Biden, Clinton and Richardson, and one (Kucinich) with a Scorpio stellium. That's a high proportion of Scorpio influence! A possible answer to my question may appear in tomorrow's blog entry.

Whoever becomes president (and I hope it will be a Democrat) will certainly need a passionate desire to put things right in the USA, a strong constitution (and Constitution), and a thick skin. You know, I'm not too sure about Scorpio's skin, I suspect it's not as thick as they would have us believe. If one of the Scorpio candidates does become president, I'd guess that he or she will have paid dearly, emotionally, by the end of their term of office. Senator Biden's Sagittarius ascendant, whilst probably enabling his bluntness, may also provide a helpful buffer. 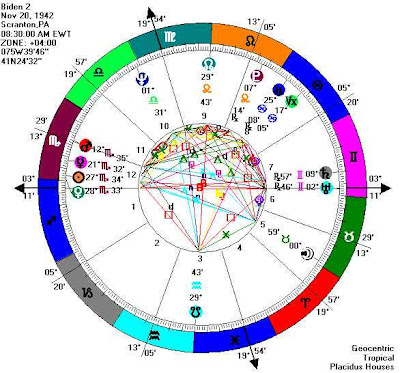 Joe Biden's natal chart indicates that he is very Scorpio: passionate, deep and determined. Born 20 November 1942, Scranton PA, his birth time according to Astrotheme was 8.30 am, giving him a Sagittarius ascendant.

In 1972 Senator Biden lost his first wife and a daughter in a car accident. 1972 was the year of his Saturn return, and most certainly a year when his life history turned a page. In an article HERE, by Renee Schoof we are told:

"In 1972, Biden's wife and baby daughter were killed in a car accident. His two young sons were hospitalized with serious injuries. The accident happened a week before Christmas and six weeks after Biden had been elected one of the youngest U.S. senators ever. One of his sons, Beau Biden, now 38, the attorney general of Delaware and the father of two children himself, recalls that his father said at the time: "Delaware can get another senator, but my boys can't get another dad."
"Those weren't just words," he added. "He lived them".......

Biden has never had a home in Washington. He's always made the commute."

During the week before Christmas 1972, the time of the car accident, Saturn would have reached 16 Gemini (retrograde), 7 degrees from Biden's natal Saturn.

"He has taught law on Saturday mornings at Widener University since 1991. His income is his $165,200 Senate salary and $20,500 from teaching. In a 2005 ranking of the 100 senators for wealth, he was 99th. In other words, unlike most other presidential contenders, he isn't a millionaire." 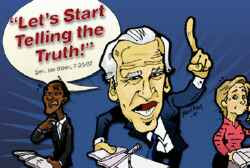 Biden as Prez would give me confidence in the USA, I think, a feeling of security, the kind of security I used to feel back in the UK. I don't feel the same here - so far. Whatever government was in power in Britain, and I experienced many I didn't agree with, I always felt that they'd do the right thing if push came to shove. I don't think the fact that Senator Biden reminds me of Lord Mountbatten has anything to do with the feeling I get. It's down to the way he answers questions, his attitude and bearing, he seems to have substance - in a nutshell, he appears presidential. Or could this be the old Scorpio magnetism at work?
Posted by Twilight at Monday, November 19, 2007