The past week has been a case of "first the good news, then the bad news", for me. I was relieved on Monday to find that the authorities had, after more than 16 weeks, cashed the cheque which accompanied my US citizenship application. Later in the week came an announcement that processing times for the applications of people in the citizenship backlog will be 15 to 18 months(the norm is 7 months or less). This means it will be too late for new citizens to vote in the 2008 presidential election. 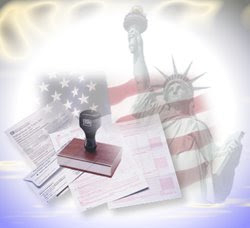 I was half-expecting something of the sort, but seeing it in print was like a slap in the face.

The press have latched onto the situation. Washington Post, Boston Globe, Fox News and others have carried articles about the citizenship backlog which is likely to deny would-be new citizens the right to vote in 2008. Even the BBC picked it up.

Hints of political fingers twiddling the knobs have been put forward, most clearly in The Daily Kos, here.

This debacle might well be nothing more than evidence of incompetence and bad organisation, of which those currently in power are able to take advantage. On the other hand, was there some sinister planning going on long before the fee increase? It seems to have been timed "just right" to eliminate millions of new voters from the coming election.

A good astrologer could ferret out the answer. I'm not an astrologer, let alone a good one - but I'm closely involved in the situation, so I'll wade in and take a look.

Government proposals for increased fees were made public in February 2007 and the new fee structure announced in May, to take effect from 30 July 2007. The fee increase was the catalyst which brought forth a huge surge of citizenship applications. It's reported that the majority of these came from Mexicans and other Latinos. How was that information accessed ? It is probably a guess. Action organisations targeting those groups, were encouraging them to become citizens and vote. This, probably with an eye to getting fair outcome to the illegal immigrant situation here in the US.

The slower moving planets are involved in matters such as this, which affect large groups of people. The situation has developed with the following background: Pluto and Jupiter in Sagittarius. Sagittarius is connected with travel and foreign lands, so it figures that immigration will also come under its "umbrella". Jupiter relates to expansion (increase of fees). Pluto relates to transformation - the timelines for all kinds of immigration visas, and citizenship applications have certainly been transformed ! The astrological background fits!

Saturn (planet of rules, restrictions, limitations) was in the last third of Leo until the beginning of September. When it then moved into Virgo, the effects of the huge backlog, and restrictions it would impose upon applicants, started to become apparent.

BUT - had there been any political manipulation?

Neptune, planet of the hidden and mysterious, was in Aquarius throughout, and in sextile (harmony) with Saturn (limitation, restriction). Could this facilitate hidden agendas, and an atmosphere conducive to manipulation?

It would seem to be an easy matter for the government to allocate extra money to the department's budget to ensure processing in, at most, 12 months. After all, the fee increases were supposed to be for the purpose of improving or maintaining levels of service. There's no hint that help will be forthcoming. An opportunity to eliminate millions of potential Democratic votes from the equation in November 2008 must present a temptation to a Republican government whose popularity appears to be declining rapidly.

We must draw our own conclusions.
Posted by Twilight at Saturday, November 24, 2007

While I wouldn't put anything past the present administration when skulduggery is afoot, I think the explanation of 'incompetence and bad organization' is probably more apt. When I arrived here in 2002, my immigration lawyer said two years to permanent residency. It took five. DHS and the USCIS are notoriously incompetent, specializing in a blend of officious pomposity and 'take-it-or-leave-it' callousness. I'll stick with my British citizenship. Nothing could persuade me to pledge allegiance to the US, or for that matter, any other individual country. Of course, I understand your situation to be a little different from my own.

On balance I think that, yes, bad organisation has created this situation, similar ones have happened in the past, this isn't unique. My feeling is, though, that a reasonable adminstration would at least try to address it, irrespective of the coming election.

What irks me more than anything is the fact that it depends in which part of the USA one lives as to how badly one is affected by this. There is much less of a backlog in areas dealt with by Service Centers other than Texas. The imbalance is unreasonable and unjust.

I've had a fairly easy ride with USCIS until now, but it has cost a bomb. We dealt with the US Embassy in London at first, which entailed my husband getting residency visas for the UK and living there for a year or so.
That cut out lot of the hassle with US service centers and the attitudes you've probably encountered. Last year I applied to have conditions removed from my greencard, and that was a fairly painless process. I've dealt with everything myself - no lawyers. It's been lengthy and expensive, but nothing half as frustrating as this last hurdle.

As for pledging allegiance - well, I'll be here for the rest of my life, so it's only fair that I promise to be loyal, if I have the right to vote, not to say I won't complain though! - I'll still be a British citizen with a British passport also - dual nationality - so I reckon it's "cool", as they say. :-)