I'm not sure what prompted me to think about Omar Khayyam this week. I must have read the translated version of his poetry hundreds of times throughout my life, yet I knew nothing about the man, other than that he well understood that of which he wrote - life! His message, in a nutshell, is that we should enjoy our life, it's all there is and all there will ever be.
Who needs a library full of self-help books, a gaggle of gurus, or anything other than a pocket sized copy of The Rubaiyat?

The true birth date of Omar Khayyam remained in question until 1941 when it was ascertained via a horoscope which accompanied one of the earliest biographical notices of him, but had been ignored by scholars, possibly due to ignorance of astrology.

Omar Khayyam was born at sunrise on 18 May 1048 in Neyashibur ( Nishapur), Iran (then Persia). Astrotheme gives the birth time as 4.18am (seems a little early), and places Sun in very early Gemini, as does my own software. Astrodienst puts Sun in Taurus (26*). the variation is probably linked with calendrical changes or precession, but which is correct? Blogger, Ali Mostofi at "Astrology of Current Affairs" had something to say about the Iranian calendar, but I'm not confident that I understand enough to see how Omar's birth chart would be affected.

Above is the Astrodienst version ( Gregorian calendar),4.18am birth time.
Below is the Atrotheme version, same data. 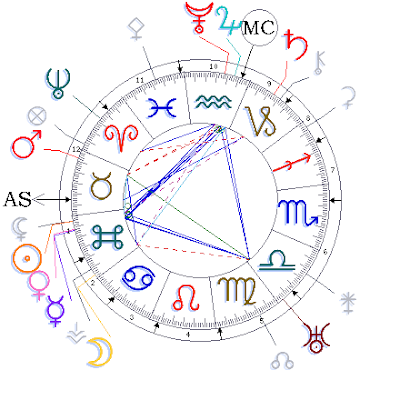 Wow! Those beautiful Air Trines, and the sextiles. The consummate intellectual and communicator, probably close to genius. Whichever chart is correct the main factors remain. An early Gemini Sun and Gemini Moon simply add to the Air show! Either way, the chart pattern is a "funnel" with its focus on inventive Uranus in Air sign Libra.

Donn A. Allen says
"He was known in his own time as a sage, scholar, Hakim (wise man) who had mastered virtually all branches of knowledge of his time – astronomy, astrology, mathematics, medicine, physics, philosophy, religion, jurisprudence - am I leaving anything out? He was a pioneer of free expression, deplored hypocrisy, most certainly was not a drunkard or libertine, and is reported to have had a truly astounding memory!"

I guess Omar Khayyam's Taurus Sun (or ascendant, if Sun was in Gemini), ruled by artistic Venus led this consummate academic into the realms of poetry now and then, leaving us a great legacy.

Most famous of his poetry, in the west, is the Rubaiyat of Omar Khayyam, as interpreted by Edward FitzGerald. Some say that this version owes a lot to FitzGerald's imagination - but surely the gist of it must be contained in Omar Khayyam's words?

A few favourite and well known quatrains, in no particular order -

Here with a Loaf of Bread beneath the Bough,
A Flask of Wine, a Book of Verse---and Thou
Beside me singing in the Wilderness---
And Wilderness is Paradise enow.

Ah, my Beloved, fill the Cup that clears
TO-DAY of past Regrets and future Fears---
To-morrow?---Why, To-morrow I may be
Myself with Yesterday's Sev'n Thousand Years.

'Tis all a Chequer-board of Nights and Days
Where Destiny with Men for Pieces plays:
Hither and thither moves, and mates, and slays,
And one by one back in the Closet lays.

The Moving Finger writes; and, having writ,
Moves on: nor all thy Piety nor Wit
Shall lure it back to cancel half a Line,
Nor all thy Tears wash out a Word of it.

Ah Love! could thou and I with Fate conspire
To grasp this sorry Scheme of Things entire,
Would not we shatter it to bits---and then
Re-mould it nearer to the Heart's Desire!

(Photograph: A statue of Omar Khayyam in Laleh Park, Tehran)
Posted by Twilight at Thursday, May 31, 2007

because Bahaqi wrote that Omar Khayyam's rising degree (ASC) was 3° Gemini (!), the more correct time of birth was 04h53 am. It is also necessary to make use of the Julian calendar.

Please see my page doormann.org/omar24.htm for more (sorry for in German only).

Thank you for your visit and comment - I'm grateful for the information. :-)

Roohollah ~~~ Hello ! It's so good to meet someone from Iran here. Thank you for visiting and commenting....and congratulations on your English - I wish I could write your language as well as you write mine!

Omar Khayyam has been one of my heroes for many years. He was a genius!

hi i really enjoyed your article! for one who's fun of omar khayyam! I have read he poems! Bought the book! but except that it s impossible to find his scientifical work!

I have a more recent post on Omar's poems - illustrated volumes - here's a link: