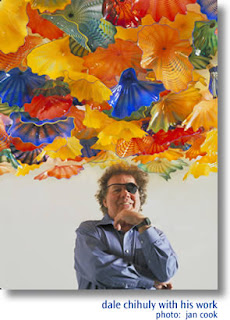 Here's one I made earlier. We're busy dodging the storms, taking a more southerly route home, via Kentucky.

Dale Chihuly was born on 20 September 1941 in Tacoma Washington, USA, no birth time known. He studied interior design initially, but later was inspired by the art of glassblowing, which became his route to world fame. I'm not sure, though, that Chihuly is as well known generally in Britain and Europe as he is in the USA. There was an exhibition of his work in Kew Gardens, London a couple of years ago. I'd never heard of him until I came to live in America, and we visited an exhibition of his work in Oklahoma City -his largest permanent collection. There are frequent exhibitions of his art in glass in most major cities here. I was entranced by what I saw. It's not glass as we know it, Jim! It's glass with stage management.

After a car accident in England in 1976 Chihuly lost the sight of one eye badly affecting his depth perception. A later accident to his shoulder put an end to his own glassblowing, but he continued to design, using other glass blowers to manufacture the products of his inspirations. His "empire" has grown and grown into really big business. Examples of his work can be seen both in galleries and outdoor gardens, entwined with nature, his pieces are owned by "luminaries" of the 20th century s 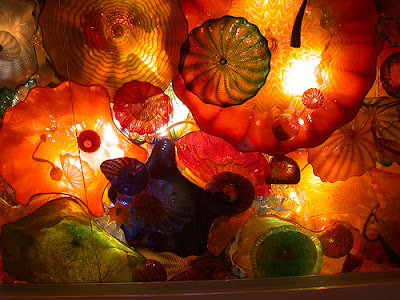 uch as Queen Elizabeth II, Bill Clinton. Elton John, Bill Gates, Mick Jagger. It's impossible to describe this art in glass in a few bloglines, except to say that, in situ, in its stage managed settings, it is more than spectacular, it's truly magical.

I'd always advise anyone who has the opportunity to do so to see an exibition of Chihuly's work, whether an art enthusiast or not.

Chihuly was born with Sun conjunct Neptune. Why doesn't that surprise me? This must be the key component in his chart. Neptune, the planet of dreams, visio 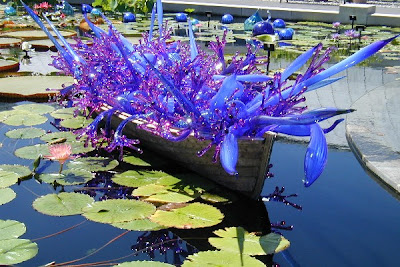 ns and imagination. Sun and Neptune are in Virgo, the Moon will also be in Virgo, but without birth time it's degree is uncertain. Saturn in Taurus trines Sun and Neptune. Chihuly is said to be a demanding master. He probably expects his assistants to reach his own Virgoan high standard of perfection! The Earthy prominence in his chart may account for his shrewd business head, something that doesn't often go with an artistic temperament. The same Earthy prominence in his nature corresponds to the organic style of almost all his works of art. Retrograde Mars, strong in Aries opposes Mercury in Libra, possibly indicating that he has an easy-going, charming side, but can be equally dynamic, even aggressive. He's 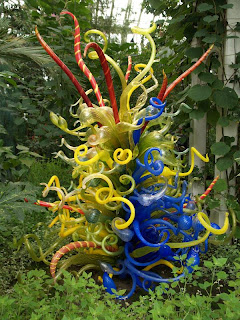 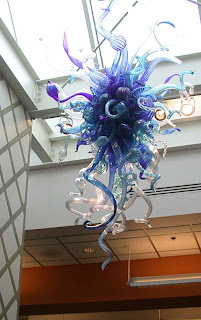 skilled dealmaker and is credited with saying "I don't get this less-is-more business, more is more!" His multi-million dollar business proves it, I suppose. I wonder if he has Capricorn rising - or maybe Leo.

I was unable to find the exact date of the accident in which he lost the sight of one eye. Ironically it was glass which partially blinded him, and glass which has brought him fame and fortune. The accident happened in 1976 - I'd guess it was in the summer. Transiting Saturn conjoined his natal Pluto in July, Mars hit his Sun Neptune conjunction in August and Uranus conjoined natal Venus in October. A potentially devastating hat-trick of blows, which were unable to stop him on his route to fame.

All photos (except the first and the boat) taken by HeWhoKnows - you can see him in this one.the boat photograph is from chihuly.com (I think). 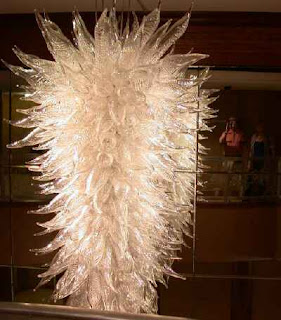 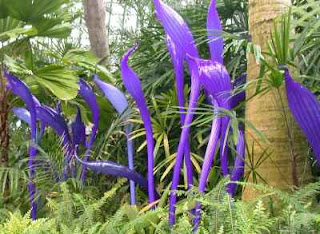 I have seen some of Dale's work and it is awesome to see it close-up.

Very interesting. Thanks. Sun-Neptune is such a perfect alignment for him! Chihuly has a huge display on the lobby ceiling of the Bellagio--a very Neptunian hotel with a big fountain in front--in Las Vegas.

I have been to several of Dale's shows! His work is too beautiful to describe! I also worked with glass, but not as art. I worked for a large bottle making factory. Glass is one of the most amazing things to work with, whether as art, on in mass production of bottles.

Thanks for your comments, Michael, Philip and Anonymous.