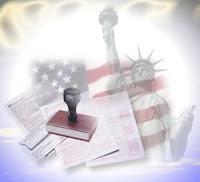 I guess there will be fur and feathers flying this week in the debate on the US Senate's immigration bill.

Where does astrology come in to it? See "Astrological Law and Order" - at the Starcats site, there's a comprehensive rundown of how mundane astrology connects to various strands of law. Immigration law could encompass almost all the planets and signs in one way or another - as, indeed, does life. Saturn and Capricorn are probably the most involved in present problems.

"Saturn creates the necessary order, structure, form and functions to mitigate the chaotic factors inherent in the negotiations of group enterprises. Saturn is associated with institutions representing the legal system, civil service, and all restraining/restricting forces in society. Saturn is rules, procedures, and guidelines. Saturn is associated with the administration of justice and has its affilations with police (law enforcement) and also the regimentation of military life and discipline. The attitude of a nation toward law, order, taboos, old practices, the old guard in politics, etc., are also associated with Saturn."

What in astrology represents immigration? Sagittarius and Jupiter I guess, for they are connected with travel and expansion, also, in some ways, with law. Saturn is in trine with Jupiter just now, both in dynamic fire signs, Leo and Sagittarius - Jupiter being strong in its own sign. It's an appropriate time for the problem of illegal immigration to come under a spotlight.

This is such a complex matter, grown more complex over time because successive US administrations have failed to competently address it. At least 12 million illegal immigrants are present in the USA we are told. Can you imagine 12 million people standing side by side? I can't. The problem is huge, the difficulty in solving the problem will, inevitably, be enormous.

I've been a legal immigrant in the US since 2004. In a couple of months I'll be eligible to apply for US citizenship, a process which will probably take from 6 months to a year (if I'm lucky). The path I had to follow in order to live here legally with my American husband was time consuming, convoluted, expensive and frustrating. It's an administrative quagmire.

I reckon that what is being proposed at present is reasonable in theory - how practical it would turn out to be, in action, is another matter. The administrative underpinnings of the current plan may well be too complex to be practical, at least without years of preparation, years in which the illegal population could increase by several more millions!

This editorial from The Washington Post is one of the most logical I've read so far.

It's sad that our world cannot be an open world, with no barriers. The human race isn't yet wise enough to deal with a scenario like that. I doubt that it ever will be.
Posted by Twilight at Sunday, May 20, 2007