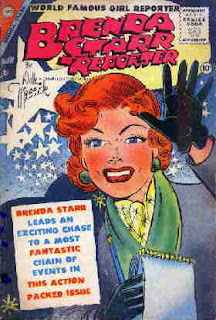 We're on the last lap of a long journey home - so here's another post I had stashed away in draft:

After an earlier blog entry about cartoonists, all male, I felt a slight pang of feminism, so set about looking for some female counterparts. There are a few, but none as well known as their masculine colleagues.

One of the earliest women cartoonists was Dahlia (Dale) Messick, originator of the "Brenda Starr" comic strip about a glamorous red-headed a reporter who has a taste for fashion, romance and intrigue. (Source of graphic: http://www.toonopedia.com/br_starr.htm).

Ms Messick shortened her name from Dahlia to Dale in order to fool editors into thinking she was a man, so great was the prejudice back in the 1950s and even in the 1960s. She was born 11 April 1906 in South Bend Indiana, died aged 98 in 2005. Talented and witty as she was though, her work doesn't have quite the same whimsical appeal as that of, say Charles Schulz. It's a different style entirely. Even so, she had 3 planets in those early degrees, which might possibly be a kind of signature for cartoonists -Venus 4*Taurus, Jupiter 5* Gemini and Uranus 8* Capricorn. Her pioneering Aries Sun is possibly the main factor driving her determination to overcome prejudice against female artists. 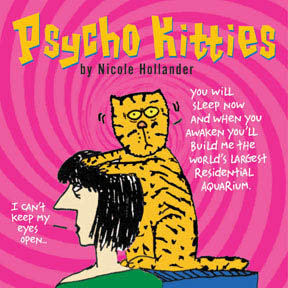 Nicole Hollander, whose birth date isn't available, other than "1939" invented "Sylvia". her style when drawing her cats is more on the whimsical side, but, again, it's a different "feel" altogether from the male cartoonists I mentioned yesterday.

Any other female cartoonists I've been a 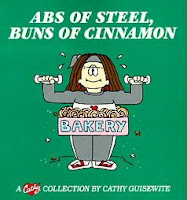 Is it time to rest my case for the early degrees often playing a significant part in cartoonists' birth charts?

The male cartoonists I featured in an earlier blog have/had a flair for using whimsy and fun whilst still making a serious point. I haven't yet encountered a female counterpart. Women cartoonists I've found so far focus more on female issues, or graphic soap opera type stories. Vive la difference!
Posted by Twilight at Wednesday, May 09, 2007