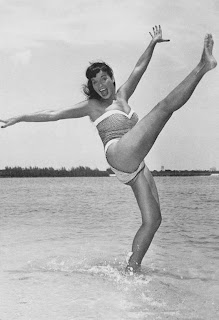 Ever since my husband wrote a brief blog about Betty Page on her 84th birthday I've been a little curious about her. No doubt her fame did reach Britain, but I was unaware of it. On Sunday night my curiosity was satisfied - HBO showed a film called "The Notorious Bettie Page" a biography of this photographic model and pin-up icon of the 1950s. The "notorious" element was Bettie's willingness to pose in photographs of women administering "discipline". Only females appeared in these photographs - which seemed to satisfy fetishists then. Now, the photographs seem almost comical. As cameras improved, and photography grew in popularity, pinup photographers replaced pinup artists such as Vargas and Petty (already blogged HERE) 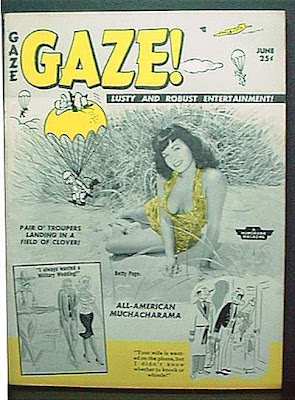 Bettie was born on 22 April 1923, some sources say in Nashville, others say in Jackson, Tennessee. There are some 100 miles between them, but for a "stand well back" look at her 12 noon chart it doesn't really matter. Astrotheme has her birthtime at 3am, giving Pisces rising and Uranus on the ascendant, Moon conjunct Pluto in Cancer. That's all very appropriate, and for me, a little too appropriate. I suspect a little judicious "rectification" has gone on. I'll stick with 12 noon.

Natal Sun is at 1*Taurus, ruled by Venus, planet of beauty - of course! Mercury is also in Taurus at 16*. I notice there are several planets in the middle degrees of signs - not sure what, if anything this might signify. There's a nice Grand Trine in Water signs involving Jupiter, Uranus and Pluto, the Moon might be involved too, but without a time of birth we can't be sure. This easy flowing configuration of planets in Water signs might well have endowed Bettie with an innate understanding of how to appeal to the emotions of the opposite sex, especially those of her own generation many of whom who would have revolutionary Uranus and sexy Pluto in trine too. Jupiter in trine with these two generational planets in Bettie's chart could have assisted in "publishing" her many charms to a wide audience.

The opposition of Mercury in common sense Taurus to Jupiter in sexy Scorpio accounts for the anomaly of her provocative and titillating poses, as against her basically innocent, fun loving joie de vivre and lack of any "nastiness". The antagonistic squares from imaginative Neptune to sexy Jupiter in Scorpio, and common sense Mercury in Taurus, may also be involved in this anomaly, and in Bettie's decision to abandon her career at its height.

Mars in Gemini and Saturn in Libra, two mentally oriented Air signs, lie a little too widely apart to form a trine. Bettie was a very intelligent girl, held a BA degree from Peabody College, became disillusioned after four years at a teachers' college and started to capitalize on her looks, entering beauty contests. I guess the rest is history. I wonder if, had those two Airy planets been in closer trine, she might have proceeded to use her brain, rather than her body in an academic career ? But that would have denied millions of males the joy of gazi 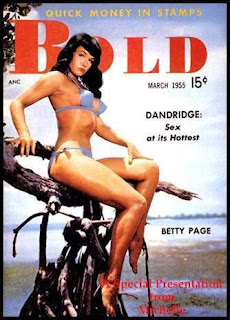 ng upon pictures of their idol.

Bettie Page was definitely a template for some of today's idols, e.g. Madonna. She was in the avant garde of independent females who abandoned the kitchen sink and cosy image of how a woman should behave. No more waiting obediently at the door as husband returned from work calling "Hi honey, I'm home". I admire her, not only for her good looks, but for her spirit, and for her good sense in abandoning her fame at just the right time to ensure iconic status in the minds of her adoring audience.

In a letter handwritten by Bettie, as preface to the book "Bettie Page, the Life of a Pin-up Legend" by Karen Essex and James L. Swanson, she says:

"I was not trying to be shocking, or to be a pioneer. I wasn't trying to change society, or to be ahead of my time.
I didn't think of myself as liberated, and I don't believe I did anything important. I was just myself. I didn't know any other way to be, or any other way to live. If my photographs speak to you, then I am happy. If I am remembered today, it is because you, the reader, see something in me that I never saw in myself"
Posted by Twilight at Tuesday, May 15, 2007

I wrote about Bettie Page, too ('She was Notorious!') after I saw that movie and my curiousity was piqued--I wondered if the chart showed her to be as wholesome in personality and intent as she was portrayed--and I think she is!

Thanks for another fine read!

That Essex book says BP was born near Kingston Springs TN, which is about 30 miles W of downtown Nashville (and where I live now).

Peabody College is now part of Vanderbilt University, and has always been kind of an elite place.

Hi Julie and Hi Jilly! thanks for popping in here.

I'd completely forgotten I'd written this!

Yes, Julie I did feel she wasn't exactly what men might have expected....lol! Good - it's nice we can fool 'em now and then.;-)

Jilly - Thanks for the additional information. Perhaps if someone else passes by here in future and wants to have a go at her chart, they can make use of your more accurate place of birth data for her. :-)

I went to look up what I had on Bettie, as I thought I had a time, and it turns out I used 22 April 1923 3 AM Nashville TN--that's according to Astrodatabank and it has a Rodden rating of 'B' I know that corresponds to your suspect Astrotheme time, Twi, but I thought the Rodden rating was worth mentioning (and at 'B' fairly reliable). Sorry, I should've offered that sooner! J

I thought I'd used a time for Bettie, so I looked up what I had, 22 April 1923 3 AM Nashville TN. I know that corresponds to your suspect Astrotheme time, Twi, but it has a Rodden rating of 'B' (which I think means it was obtained from Bettie's writing, was claimed to some third party by her, like in an interview, or was claimed by a party close to her who we presume would know). Sorry, ladies, I should've confessed sooner! J

Hi Julie - thanks for coming back with more information. Hmmmm - yes, seeing that Astrodatabank is using the same time of birth and gving it a reassonable amount of credence, it seems my suspicious mind might be unwarranted on this occasion ;-) and it is a great fit!


So, for any future readers - putting Julie's and Jilly's information together we can state BP's birth data more confidently as