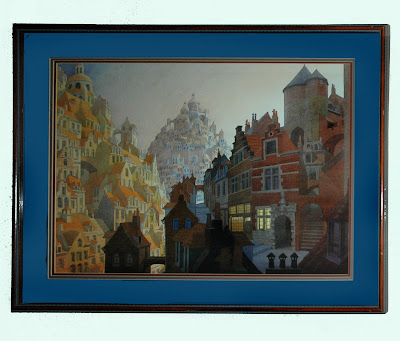 The picture is a mystery and a fantasy, so in one way it's Neptunian. It's all about buildings and structure though, so in another way it's Saturnian. Saturn and Neptune have lately moved out of exact opposition, maybe now is an appropriate time to display my acquisition.

I found this large (36"x28"), nicely framed print last year, in a junk-cum-antique shop in a nearby town. It was marked "Unique print, frame and mat alone are worth the asking price". True enough. The print has been tastefully framed and triple matted by someone, who at some time obviously loved and valued this picture, as I do now.

When I first saw the picture I was immediately attracted by the light in the window of the building in the foreground, the architecture of the doorway and windows reminded me of a building where I once worked. But the entire fantasy cityscape is a mystery. I've been unable to find any information as to its artist or source. It's a good quality print, or so I'm told by HeWhoKnows, magnifying glass in hand. I've wondered if it might originally have been part of an even larger illustration, it can give that impression. 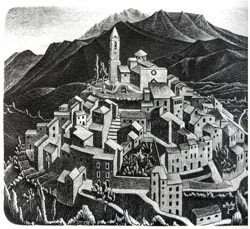 Those hilly structures are reminiscent of Italian hill towns, but there is no hint of vegetation or trees in the picture, and there are just too many buildings to fit that theory. The architecture is definitely European though, but not British. The picture reminds me of some of Escher's early work which did depict Italian landscapes. At right is the first lithograph ever made by M.C. Escher -"Goriano Sicoli, Abruzzi" (1929). Image from Herakleidon Those illustrations were, as far as I know, in black and white, or accasionally black with some other colour. I doubt that our picture is a print of an early Escher illustration, but I'd say that the artist was influenced by Escher.

Perhaps the picture illustrated the artist's idea of a city of the future, or a place from another dimension ? Whenever I gaze at it I always come back to the lighted room in the foremost building - perhaps someone in there was dreaming.......

If any passing reader recognises the picture or the style, or can add any information at all, I'd be delighted to hear from them.
Posted by Twilight at Friday, May 18, 2007

It feels very dutch & medieval, out of a fairy tale....

Thanks, Ariana, it does indeed!