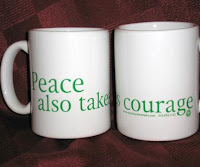 I was moved by an article written by one of my favourite journalists, Christopher Cooper, for The Wiscasset Newspaper. The piece is entitled "As Some Warn Victory, Some Downfall" - which is a line from Bob Dylan's song " It's Alright Ma (I'm only bleeding)". Mr Cooper writes exactly what I'd like to be able to write.

A short extract:
"Anybody who likes this war should sign on to it. Send his or her son and daughter. Send the Pentagon a generous check toward the cost. Support the troops? Go die in the desert so they don’t have to. Yellow ribbons tied to a power pole or a string of made in China toy flags along a bridge rail don’t do the job five long years into the butchery.

I wish I thought electing Democrats these days made much difference. I wish I thought the anguish ninety or a hundred families feel every month when they see a brace of officers coming up their front walks bearing that unspeakably terrible salutation could somehow seep into each of our hearts and make us turn off the ball game or the car race or walk out of the Spiderman sequel and demand that somebody, anybody, either party, do the right thing. Right now."

Christopher Cooper's article led me, via its title, to read again some Bob Dylan lyrics of the 1960s. Many still seem very relevant today, they were written in the 1960s when Uranus conjoined or lay very close to Pluto. The sentiments expressed may become even more relevant when the Uranus/Pluto squares arrive in 2011.

In a review of Mike Marqusee's book, "Chimes of Freedom: The Politics of Bob Dylan's Art", in 2002, Stefan Schindler of La Salle University wrote:

"What is especially fresh about Marqusee's book is its astonishing relevance. It's a journey into the smoldering fissures that still inform our collective psyche: globalized, militarized, terror-edged, led by lunatics. Marqusee makes exactly the right point when he suggests that "the sixties might someday come to seem merely an early skirmish in a conflict whose real dimensions we have yet to grasp." As William Faulkner said: "The past is not dead. It's not even past."

Bob Dylan's lyrics are in stark contrast to the mawkish sentimentality of some country music offerings of today (as mentioned in Saturday's blog post). Dylan's own politics have been the subject of argument among his fans. It may well be that he is not quite as "lefty" nor totally anti-war as these lyrics suggest. It doesn't matter. We each see in them what we want to see. Good poetry and lyrics can be chameleon-like, capable of appreciation in many ways, on different levels.

Perhaps, as we draw nearer to those Uranus/Pluto aspects, more Dylan-esque lyric writers will arrive on the scene, I hope so.

From IT'S ALRIGHT MA (I'm only bleeding)
As some warn victory, some downfall
Private reasons great or small
Can be seen in the eyes of those that call
To make all that should be killed to crawl
While others say don't hate nothing at all
Except hatred.

Disillusioned words like bullets bark
As human gods aim for their mark
Made everything from toy guns that spark
To flesh-colored Christs that glow in the dark
It's easy to see without looking too far
That not much
Is really sacred.

While preachers preach of evil fates
Teachers teach that knowledge waits
Can lead to hundred-dollar plates
Goodness hides behind its gates
But even the president of the United States
Sometimes must have
To stand naked.

From SONG TO WOODY
I'm out here a thousand miles from my home,
Walkin' a road other men have gone down.
I'm seein' your world of people and things,
Your paupers and peasants and princes and kings.

Hey, hey Woody Guthrie, I wrote you a song
'Bout a funny ol' world that's a-comin' along.
Seems sick an' it's hungry, it's tired an' it's torn,
It looks like it's a-dyin' an' it's hardly been born.

I'll be spending several hours in the waiting room of our local hospital this morning, riding shotgun for HeWhoKnows while he has a routine "procedure". No reason at all to worry, it's one of those Uranian (wink) procedures which American doctors seem very keen on. The appointment HWK was given - 6.15am - was a little sadistic .....yawn. I think the tee shirt he's wearing (right) fits in well with this blog entry.
Image at top of post from Be the Change USA
Posted by Twilight at Monday, May 21, 2007