Some critics of art, literature, film...whatever, can be a pain in the butt, so entranced by their own egos are they. For many ordinary folk their opinions are irrelevant. A case in point: Jack Vettriano, Scottish artist derided by art critics, beloved by the public. One of his paintings sold for over $1 million, all command hundreds of thousands of dollars, not to mention sales of prints, cards and posters by the truckload.

ttriano was born on 17 November 1951 in Fife, Scotland. Sun in Scorpio, Moon in Cancer (exact degree uncertain), Venus, Saturn and Neptune in Libra, Jupiter opposing Venus from Aries. Mercury in Sagittarius. Any astrologer who studied Vettriano's paintings would not be surprised to find that the Sun was in Scorpio w 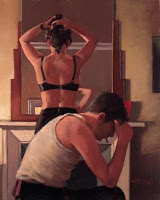 hen he was born. 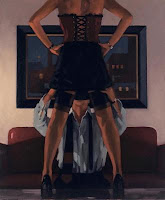 A quote from the man himself -
"The greater glory of art doesn't come into it, he confirms. "That's not why I paint," he said. "It's wall decoration for me, I don't regard it as this big meaningful thing. My subjects are men and women getting off, that's all. Mind 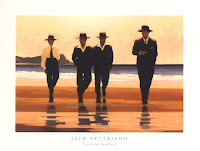 you, some people don't think sex is serious, but I happen to think it's terribly serious." 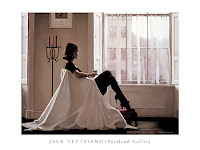 Not all Vettriano's work oozes sexiness, but even when it doesn't, there's an air of mystery and "film noir" feel to it. Pluto, Scorpio's modern ruler is widely trine Mercury, which may add to the artist's penchant for the sexy and mysterious. All very Scorpio! Yet some pieces also indicate an artist who is sensitive to the intricacies of relationship - Cancer Moon at work? Almost every painting calls fort 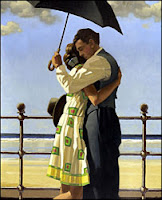 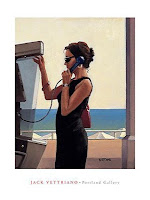 f emotional response. The three planets in Libra, ruled by artistic Venus probably account for his innate skills. He's a self-taught artist who started by copying figures from art manuals, and has been hauled over the coals for it ever since. He has, over time, developed his own identifiable "trade marks" - beaches, umbrellas, people dressed in formal clothing, and male/female interaction.

For me, Vettriano falls into the same category as Norman Rockwell and Edward Hopper -all act as mirrors, reflecting small slices of life, though each from a differe 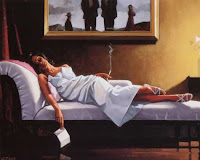 nt perspective. In order to be successful in this kind of illustrative art there needs to be insight and compassion, experience and understanding as well as drawing and painting skills. The combination of these qualities is rare, and I believe such artists deserve more appreciation from critics.
(Paintings from top (right to left) "The Singing Butler". "Devotion". "A Very Married Woman". "In Thoughts of You". "The Billy Boys". "Embracing". "Her Secret Life"."The Letter".)