Louisa May Alcott, Sagittarian - More than a Little Woman 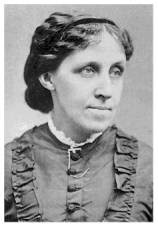 The only books I remember clearly from my childhood were written by this author. I received "Little Women" as a gift one Christmas, and after reading it with much delight sought out its sequels "Good Wives", "Little Men" and "Jo's Boys". Louisa May Alcott wrote much else, of course, but these books were what brought her fame.

Louisa May was one of four daughters of transcendentalist and teacher Bronson Alcott, and Abigail, his wife, a vocal proponent of women's rights. They settled in Concord just outside of Boston. Louisa May and her sisters were educated mainly by their father. They were often in company of his friends who included such luminaries as Ralph Waldo Emerson, Henry David Thoreau, Nathaniel Hawthorne and other literary figures, all of whom lived nearby. The Alcott family was not materially prosperous however, the children grew up in basic poverty, but surrounded by intellectual richness.

Louisa May began writing early, first for her sisters, in the form of poems or plays which they would perform. She was forced to take any kind of work available for a few years in order to help the family finances, but she continued writing short stories and poems which were published in popular magazines. At age 22 her first book, "Flower Fables" was published . It was not until age 35 that she wrote "Little Women". The tale is partly autobiographical, drawing broadly from the experiences of herself and her sisters during childhood. At least 30 of her books were published, "Little Women" has never been out of print.

Louisa never married. In later life she became an advocate of women's suffrage and was the first woman to register to vote in Concord, MA. Her health had been permanently damaged when serving for a short spell as a Civil War nurse. Louisa contracted typhoid fever, she recovered but suffered the poisoning effects of mercury from a drug used at that time to cure the disease . Her health failed gradually, she died, aged 56, two days after her father had passed away. Interestingly her father was born in 1799, on the same day and month as Louisa May - 29 November.

So, does Louisa May Alcott's astrology fit? I have noticed that some internet sources offer a birth time. I believe this has to be suspect. I doubt that records of birth times were kept in 1832. In most states it was not until the 20th century that time of birth was officially recorded. The time offered gives a Virgo ascendant and Gemini midheaven, which for me is a little too "convenient" for an author!
I suppose it is possible that in some of Louisa May's writings or diaries she has mentioned an estimated time of birth, but I'm doubtful - why would it be of any importance to someone who had no interest in astrology ? I'm not convinced, so will continue minus birth time.

Sun and Mercury in Sagittarius with 19 degrees between them. Sagittarius is the sign of philosophers and free thinkers. It has been said that Louisa May, though surrounded by transcendentalist philosophies in her young life, did not ascribe to them herself - she followed her own free-thinking, possibly fuelled by her Moon and Uranus in Aquarius.

Saturn is in Virgo, squaring Mercury within 2 minutes of arc - the writer's Saturnian link!

There is a Grand Trine in Earth linking Mars in Taurus, Saturn in Virgo and Neptune in Capricorn. I believe that this accounts for Louisa May's determination to provide for her poverty stricken family, which she continued to do throughout her lifetime. If she had any ambition or inclination to write worthy intellectual tomes, she decided to forego it in favour of writing what she was sure would sell and provide for her loved ones.

Jupiter, the publishing planet and traditional ruler of Pisces, lies strong in that sign, it squares Louisa's Mercury in Sagittarius, and opposes Saturn in Virgo, producing dynamic energy between the writing and publishing planets.

Pluto in Aries trines her Sagittarian Sun, but exactly squares her Venus in Capricorn. Perhaps while powerful Pluto may have aided her deepest ambitions, did the powerful, if diminutive, planet place an obstacle to her love life ?
She is quoted as having said "I have fallen in love with so many pretty girls, never once, the least bit, with any man". Whereas nowadays that statement might be thought to imply a certain sexual orientation, in the 19th century I very much doubt that was the case.

I think Louisa May Alcott's astrology is fitting , even without the benefit of a birth time.

My interest in astrology inspired me in the past to try to categorise the sisters in "Little Women" according to their archetypes. I decided that Jo, who I'm sure was Louisa's alter ego had to be Aquarian (reflection of her Moon) . Meg, the homemaker seemed to me to depict Taurus. Amy, the spoiled, vain sister was typically Leo. Beth the gentle one fitted Pisces well, I thought. All four elements were covered, though I doubt the author was aware of it!
Posted by Twilight at Friday, December 08, 2006

Thanks for a fine post about the author of one of my favorite books! But I must object: Amy didn't have the fiery spunk of a Leo! (Well, perhaps I'm biased, being a Leo myself.) I'm thinking she had to be a Libra with all her paintbrushes and that fine sucking-up ability. And Jo was such a Sag to me (the character even says she was born in November!) - but had to have Mercury in Scorpio with that temper of hers. But yes, let's give her an Aquarius Moon!

Sag. was my second choice for Jo, Aquarius (my own prejudice) was decided more on the content of the sequel books I guess, on her disinterest in marriage, and general obtuse-ness. lol! I'd forgotten about her birthday having been mentioned.

You're probably right about Amy, too. Libra would better fit her arty side.
That clothes peg got me though !!
If LW were set in today's world Amy would be at the head of the queue at the plastic surgeon's office! :-)