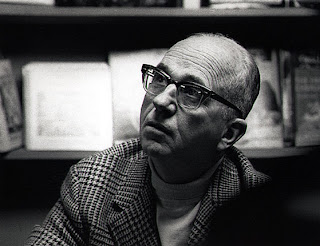 There is no birth time available for James Michener. His birth date could, in fact, be questionable. He said that he was a foundling with no knowledge of his date or place of birth, he was adopted by a woman who was thought by some people to be his biological mother. She took him to Doylestown, in Bucks County, Pennsylvania, which was his home, along with several other orphans, until he left to thumb his way across the country. The question mark over his birth date makes any astrological analysis somewhat shaky, let's see how well the chart for 3 February 1907 fits.

James Michener was one of America's outstanding authors of the 20th Century. He is one of the Pluto in Gemini generation of writers, and they, in my opinion are "la creme de la creme". Unlike some of his contemporary journalist/humorist writers who were discussed in earlier blogs, this man lived a long, relatively happy, healthy and active life. He died aged 90 in 1997. He wrote at least 40 books, many of which became bestsellers, some have been made into movies, TV series, or stage shows. Notable among these are "Hawaii", "Centennial", "South Pacific", "Chesapeake", "The Source", "Space", "Iberia", "The Covenant", "Texas", "Alaska", ......the list goes on!

I first discovered James Michener via a television mini-series of "Centennial", back in the 1970s in England , I didn't ever forget it. I bought the book, read it from cover to cover - a notable feat for me and my impatient mind, when presented with a thick book! At various times since then I tried unsuccessfully to buy a VCR set of that TV series. I eventually found a set (at great cost!) a few months ago, via the internet. Watching it all again was like a dream come true for me. I saw the movie "Hawaii", and later read the book, saw the TV series "Texas" which I thought didn't stand up quite so well to TV's manhandling.

So, to the astrology :

James A. Michener, if his birthdate is correct, was born with Sun and Mercury conjunct in Aquarius. Saturn is exactly semi-sextile (30*) in Pisces - that's the Saturnian link which I believe helps to define a writer. Michener admitted to being very disciplined, writing every day , for10 hours, 7 days a week for 3 years to complete one book. Jupiter, the publishing planet is found in Cancer opposed by Uranus (his Sun's ruler) in Capricorn. His Moon lies in Libra exactly trining Mercury and Sun in Aquarius, so with Pluto in Gemini, there's a Grand Trine in Air, fuelling his mental capacity , he was said to be a brilliant student. His Aquarian Sun would have inclined him towards his interest and participation in politics.

Venus lies in Sagittarius - I knew it! I have this placement. It can relate to a love of travel, possible marriage partners of different nationality to oneself.
Both of those factors fit Michener (and me)! He lived in many different countries in every part of the world at various times in his life. He married 3 times. His literary success certainly overshadowed his personal life. His first marriage, in 1935, ended because of their long separation during the war. A second marriage lasted seven years, ending in a bitter divorce. While in Japan, he met his third wife, Mari Yoriko Sabusawa.

Mars, strongly placed in Scorpio probably helped him survive a poverty-stricken childhood and early adulthood with values intact. He said that he had to become tough, but was glad of his childhood experience . An interview at http://www.achievement.org/autodoc/printmember/mic0int-1 offers a chance to get to know Michener a little better.

James Michener, a brilliant scholar, seemed set for an academic career. War changed his direction. During his naval service in World War 2 which could have been avoided, though he decided to serve, he started writing. His first book was based on his experience of the South Pacific, and was, of course, a great success. In time it was to become both stage show and movie.

After more successful books Michener diversified somewhat, ran for Congress, was not elected, but spent many years in public service. (see comments)

During the interview (linked above) Michener was asked about a coincidence that the countries chosen as the subjects of several of his books each came into prominence on the world stage sometime later....

"And somebody the other day, a fine professor, made an introduction of me, which I had not thought about, but which I had thought about a great deal since. At that time, in the world, there were about a half dozen trouble spots: the Near East, the Jewish-Arab relationships, South Africa, revolution in Poland, the emergence of Japan, the absorption in the United States of two outlying territories like Hawaii and Alaska and four or five other things. And he pointed out that I had written full-length books about all these areas before they came into prominence. And I did! There they are. Look at the dates.
Now this cannot be because I was exceptionally brilliant. I am not brilliant. I'm something else. I don't know what the word would be, but it isn't brilliant. And I'm not all-wise. I'm a pragmatist. I learn as I go along. But I did have a feeling through my study of geography and history and people, that these places had to come into prominence. And that when they did come into prominence, people would want to read about them."

I suspect that it was NOT pragmatism, but insight or even precognition - which he denied.

Another quote from the same interview which allows a little more insight into this man:
.
James Michener: I would hate for any young person to think that she or he was the center of the universe. I lived in a little town, in a medium-sized state, and in a medium-sized country. I mean, Canada and Brazil and China and Russia are all much bigger than we are. And I live on a medium-sized planet. Jupiter and Saturn are much bigger than we are. And our galaxy, our star, you know, is one of the smallest stars and doomed after four and one-half billion years. And our galaxy is not the big one in the sky. And it's only one of about a billion or more. So I cannot believe that I am the hottest thing in the universe. And I think that sobers you up...........................
I think one ought to see oneself in perspective, and part of that perspective with me is that we are on this planet for a very short time, and that we had better understand that the life system that produced us goes on, and did go on long before we got here. And that the animals and the birds have their place, and the dogs and the cats and the lions and tigers. And that man is the apex of that pyramid, but he ain't the whole pyramid. No way. He is the apex, but not the whole pyramid itself. And I think that those things make someone like me have a rather stable point of view. About books and about art and about politics and about what the good life is. "

James Michener was jaw-droppingly talented, yet he said, on several occasions that he thought true writers were people like the Bronte sisters, Emily Dickinson, Eugene O'Neill, who sat down and wrote from their limited experience but vast imagination, with little, if any, research. Michener's style and subject matter demanded huge amounts of research.

From orphan child to gifted student, from naval officer and author to public servant, James Michener was an amazingly multi-faceted, multi-talented individual. Does the astrology of 3 February 1907 fit what we know of him? Yes, pretty much, but Mercury so close to the Sun doesn't feel quite right to me . He was such a disciplined, serious writer and researcher, somehow Mercury in Capricorn would seem more appropriate. However, a birthdate as far back as 25 January would be necessary to give Mercury a Capricorn placement. Could that be a possibility ? He states that he was a foundling baby. Was 3 February the date he was found, or the estimated date of his birth? There is no information on this because Michener would not discuss the matter. I'm sure, from what I've read, that Sun in Aquarius IS accurate, Venus in Sagittarius fits him exactly, too. If his birthdate were adjusted to January 25, with Mercury in Capricorn, the Moon would move from Libra to Gemini - either would be fitting, perhaps Gemini is more appropriate? In the end though, the birth date stated, 3 February, has to be accepted - its accuracy can never be established .
If Mabel Michener, his adopted mother, was in fact his biological mother as some have said, then she would have known his date of birth. I shall continue to wonder about this.
Posted by Twilight at Wednesday, December 06, 2006

I do astrology myself, so I was severely disappointed in your reading for Michener. Michener was never a congressman; he never served.

Anonymous ~~~ Hi. thanks for commenting.
You'll notice that this post is dated 2006 - I'd not been blogging long, and must have managed to get things muddled - or perhaps read an article which misled me.
I now see the following

Michener also devoted much of his time to public service. In 1962, he ran for Congress as a liberal Democrat, but lost in a decidedly conservative district. In 1968, he served as secretary of the Pennsylvania Constitutional Convention. From 1979 to 1983, he was a member of the Advisory Council to the National Aeronautics and Space Administration (NASA), an experience that solidified his interest in the field. Other positions included appointments as cultural ambassador to various countries, the advisory committee of the U.S. Postal Service, and the International Broadcasting Board.


I'll pop an error notice in there - thanks for pointing out my error.