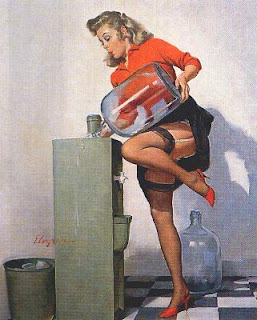 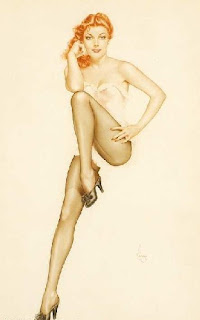 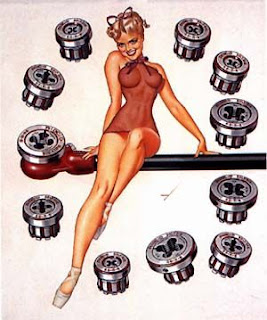 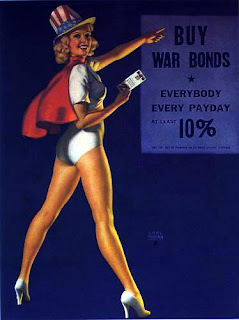 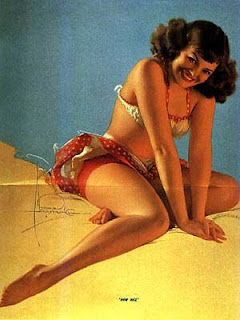 Top by Gil Elvgren. First row left by George Petty.
First Row right by Alberto Vargas
Bottom row left by Rolf Armstrong.
Bottom row right by Earl Moran.
What I most enjoy, in using astrology, is to find a group of people with something in common, and look at their charts to see if there's a common thread. I tried this in earlier blogs relating to a group of humorist/writers of the Pluto in Gemini generation. Now, without realising it, I've picked another group of Pluto in Gemini individuals. I had in mind a group whose work has great similarity - artists who specialised in painting the classic American pin-up, popular in the mid-20th century.
I already knew the names of a few American pin-up specialists - Alberto Vargas, George Petty and Gil Elvgren, because I admire their work. I was surprised to find, on doing some research, that there were dozens of such artists. However, the three I've mentioned, along with Rolf Armstrong, their forerunner, and Earl Moran, were five classics, and stand for me as the truest representatives of the genre. Examples of the work of each are pictured above. Luckily I was able find their birth dates minus birth times. I think any major link should be apparent from 12 noon charts (me and my 'broad brush, stand well back' approach! )
Rolf Armstrong 21 April 1889 Seattle Wa
Earl Moran 8 Dec 1893 Belle Plaine Iowa
George Petty 27 April 1894 Abbeville La
Alberto Vargas 9 Feb 1896 Arequipa Peru
Gil Elvgren 15 Mar 1914 St Paul Minnesota
I DID find a common thread! All 5 artists have Pluto in Gemini, 4 have Neptune in Gemini too, but that's purely generational. It's the fact that their Suns form close aspects with Neptune which I found significant.
Rolf Armstrong - Neptune 00*Gemini Sun at 1*Taurus - semisextile (+ Pluto is at 4*Gemini)
Earl Moran - Neptune 12*Gemini Sun 16* Sagittarius - opposition (+Pluto 9* Gemini)
George Petty - Neptune 11*Gemini Sun 7* Taurus - semisextile (+Pluto 9*Gemini, Jupiter 5* Gemini)
Alberto Vargas - Neptune 15*Gemini Sun 20 Aquarius - trine (+Pluto 10* Gemini)
Gil Elvgren - Neptune 25*Cancer Sun 24* Pisces -trine (Pluto 29* Gemini)
Neptune/Sun aspects found = 2 semisextiles, an opposition and 2 trines - all within 5* orb, Pluto is drawn into most of these aspects too.
Whether links would be apparent in charts of other, similar, artists, I don't know, birth dates couldn't be found. It's likely, though, that after the success of these frontliners many copy-cats emerged. This area of commercial art must have appeared to be a nice money-making opportunity. Copy-cats might not necessarily have the same starry background as the icons.
Neptune... hmmmm?
Let's see what the experts have to say - remembering that Pluto is involved too, which must add some extra, and slightly different, energy to the mix.
Cafe astrology says "Planets that Neptune contact are often colored by fantasy and dreaminess, and a vulnerable nature that may be susceptible to disillusionment. Here, we find hope that is sometimes unrealistic, a poetic and intuitive outlook, and compassion".
Astrology on the web says " On a higher level it rules visionaries, and those who are glamorous and charismatic."
Skyscript(Charles Harvey)- " Neptune is the planet of poets and mystics, of alcoholics and pornographers, of film makers, advertisers and illusionists. Her dream-like qualities bring a self-deceiving charisma and an enchanting glimpse into the mysteries of ecstatic merging...............This can lead the Sun-Neptune(individual) all too readily into being seduced into living out the prevailing, family and cultural myths, into living a socially acceptable lie."
MY OWN INTERPRETATION ( as it applies to the 5 pin-up artists)
Using artistic talent, possibly indicated elsewhere in their charts, they drew on Neptunian energies to depict an idealised female with perfect face and figure, scantily clothed and teasing, often looking attainable - like the girl who lived nextdoor. An illusion indeed, because the male would probably find females in his circle of acquaintance to fall far short of the standard set by these illustations, which continued to please him, even so. Dream girls, Neptunian illusions, communicated to a wide audience via the energies of Gemini.
It should be emphasised that these pin-up illustrations were in not ever crude or pornographic. They retained a certain innocence, in some cases with an almost adolescent hint of humor.
***************************************************
Pin-up art had its roots in Europe around the end of the 19th century. Henri Toulouse-Latrec and Alphonse Mucha (who had his own blog entry earlier) were some of the first artists to realise that the female form could attract the attention of the public when used in advertisements, magazines and posters. Raphael Kirchner emigrated to the USA from Eurpope at the start of World War 1 and sowed the first seeds of pin-up art in the states. Rolf Armstrong and the others from my chosen group were probably inspired by his work and followed in his footsteps. I wasn't able to discover Kirchner's birthdate, other than "1876" - Neptune and Pluto were both in Taurus in 1876. Perhaps the Gemini generation of artists, inspired by Kirchner's style (rooted in Veunus?) updated it to appeal to the American male and perhaps a younger age group. As time went on, World War 2 brought a big new audience of lonely young American males to admire the work of exponents of pin-up art. Petty, Vargas and Elvgren girls even decorated the noses of US fighter planes - inspiration for the brave crews. The updating by Pluto in Gemini artists also involved using new tools - pastels and oils were gradually replaced by the airbrush, bringing even more realism to their illustrations.
The heyday of pin-up art was undoubtedly the 1940 and 50s, photography came into its own after that, and mostly overshadowed these artists, who stand as representatives of a bygone era and Neptune/Pluto in Gemini.
Posted by Twilight at Monday, December 25, 2006