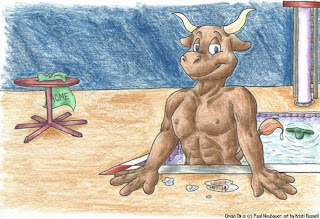 Yesterday evening we attended a "do" at the local High School. My husband's grandson was taking part in a pageant to find "Mr. Irresistible" - a spoof of the "Miss Whatever" beauty pageants which used to be popular. The grandson didn't win, though he put on a grand show. The winner was 'PJ' a diminutive oriental lad, all of 4ft 6", wearing heavy-framed spectacles. From appearance alone, he seemed the least likely winner, measured against some of his tall, athletic opponents, representatives of various sporting endeavours. PJ was wonderful - talented, funny, infectious and the audience loved him. I kept wondering about his birthdate!
That led to a silly idea which occurred to me later. How wonderful to live in "Astrology World" where birth data was commonly available. The programme to last night's event would have contained all eleven contestants' data: e.g. "Damien Yardley, 4 August 1988, Comanche, Oklahoma. 5pm ". The audience, equipped with portable technology, (something like an i-pod) could have swiftly calculated the salient features of each contestant's chart.
Enlarging on this fantasy: in "Astrology World" the newspapers, instead of printing "John Brown, 42, of London......" would print "John Brown, born 3 April 1965, London, England at 6pm"...... . This man's personality would be as an open book to us all, courtesy of our astro-i-pods. Fashion stores would arrange their goods along such lines as - "Dresses for Scorpio stelliums", "Suits for the man with a well-aspected Saturn", or "Nightwear for Neptunians".
It'll never happen of course, and that's for the best. We'd lose some of the mystery in life, and last night's show might not have held the magical surprise that it did.