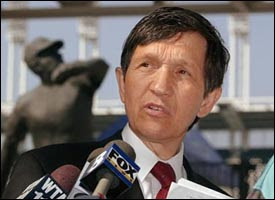 I am an English woman in America, a socialist, and concerned about the future. I believe the choice the people of the USA make in the 2008 election could make or break, not only the USA, but the planet. ( I hope by 2008 to be eligible to vote myself, by the way, so am taking a keen interest in events.)
The Washington Post reported yesterday:
"Democratic Rep. Dennis Kucinich launched his second bid for president on Tuesday, a long-shot candidacy fueled by his frustration with his party's effort to end the Iraq war.
"I am not going to stand by and watch thousands more of our brave, young men and women killed in Iraq," Kucinich said to applause from a crowd gathered at City Hall. "We Democrats were put back in power to bring some sanity back to our nation."
I like what I've read about this man. He's my kind of politician. If Al Gore doesn't run in 2008, Dennis Kucinich would be the next best choice, in my opinion.
Astrologer Maya del Mar, who sadly died recently, wrote about him prior to the 2004 election. Birth data: 8 October 1946, Cleveland, Ohio. Maya had obtained a birth time for him, which I'm assuming is correct (5.53pm).

Maya del Mar pointed out Dennis's interesting Pisces connection. I like better his Scorpio connection. Mercury, Jupiter, Mars and Venus at 1*, 2*, 9* and 26Scorpio respectively. Sun at 15* Libra, Neptune at 8* Libra. Moon Pisces, Ascendant 14.56*Aries. Saturn at 7* Leo (so his Saturn return is now past.) As Maya mentioned the Sun is in good aspect with all 3 outer planets - I think that has to be an advantage in anyone's chart.

Dennis's Scorpio influence will give him the intensity and determination this fixed sign is known for, and which will be needed in whichever president has the dubious pleasure of taking up the reins of the USA after the next election. The USA will need a very strong hand at the helm to negotiate a change in course, I'd guess that this man IS strong enough. I'm glad his Sun is in Libra, for in spite of his intensity, he'll have charm, and with help from his gentle Pisces Moon, he has great potential to woo the public. Might this be an iron hand in a velvet glove? If it is - perhaps that is exactly what's needed at this point in time. Dennis's Aries ascendant (if the birth time is right) is directly opposing his Sun, Aries/Libra axis, mid-sign - said by some astrologers to be the most potent area of any sign. Sun opposing ascendant is thought to imply a Libra "feel", especially if Sun is in 7th house, which it is, in this case, AND in Libra!! So this opposition is underlining and emphasising Dennis's Libra characteristics. This opposition can also mean skill in negotiation, being able to "stand in another's shoes".

An extract from his recent announcement of intention to run for president, which illustrates his aims:
http://www.kucinich.us/files/KucinichAnnouncement.pdf
"My home is in Cleveland. Each day I see the effect of our misplaced national priorities on my city: The number of factories and businesses, large and small, closing. My constituents and people just like them across America are losing their jobs, losing their middle class status and being pushed into poverty. Blue and white collar workers in the city and suburbs are losing their homes. They are losing their hard-earned retirement. A total of one hundred million Americans have no health care or are underinsured. Budget deficits have crippled school districts.
Many cities are in financial trouble, forced to lay off vital city workers, unable to finance repairs to bridges, roads, water systems and sewer systems. The price of natural gas is rising. Huge utility rate increases are in the offing. It is getting more and more difficult for people to make ends meet. Meanwhile millions of entrepreneurs whose ingenuity will create new jobs by bringing forth advanced cleanenergy technologies are being starved for capital.
I live in the same working class neighborhood in the same home I purchased thirty five years ago. My parents raised seven children and never owned a home. We lived in twenty-one different places by the time I was seventeen, including a couple of cars. I know what people go through. I have seen first hand the effects of poverty and social disorganization. I also know of the powerful strivings of the human heart. I know that with just a little help, a little encouragement, and a little money, people are capable of creating new wealth and new worlds. That creative power is part of the birthright of all Americans.
I also know what the destructive power of war does to families and to our nation.. I know what Vietnam did to this country and did to my family. I know how it divided our nation and set America apart from the world. The war in Iraq has already taken its toll on Cleveland and in communities like Cleveland across the United States. The war, tax cuts for the already privileged, and our trade policies have become a massive engine to redistribute upwards the wealth of our nation and to transfer our national wealth out of the country. Policies which divide people and fracture the social compact are inherently
un-American. Our nation’s very name makes of striving for unity a sacred cause."
..............................................................................................................................

Dennis Kucinich may be an outside choice, for Democratic candidate, Mrs Clinton and Mr. Obama are presently getting most of the publicity, but there's a way to go yet, and a few more bridges to cross. We shall see !