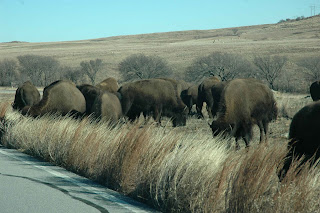 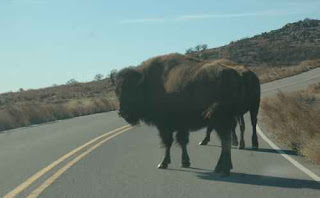 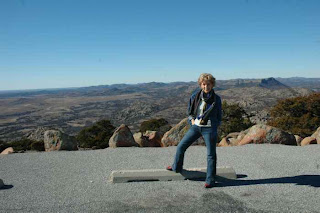 Christmas Day here in south west Oklahoma was wonderfully clear and bright, but windy and cold. Family gift-giving had taken place at a pleasant evening get-together on Christmas Eve, so we had the whole day stretching before us. We packed some sandwiches and soft drinks and headed for the Wichita Mountains - a low range some 50 miles from home, enclosing Mount Scott and a Wildlife Refuge.


There's a paved road to the top of Mount Scott, which rises two and a half thousand feet above sea level. That's me (above) at the top of Mount Scott - there are lovely views - miles of the Wichitas on one side and the great plains on the other. A Native American legend tells that The Great Spirit once appeared atop Mount Scott after a devastating flood. I love the mountain because my maiden name was Scott ! It's actually named for an American General in the war against Mexico.


After admiring the views, battling the brisk wind, and feeling for a while that we were the only humans on Earth, we descended into the 59,020 acre WichitaWildlife Refuge. After driving for a while, probably the only vehicle for many miles, we came upon a herd of around 25 buffalo. They were quite unfazed by the approaching car, wandered in the road right in front of us . We stopped in their midst, they looked at us with disdain, moved slowly on, and continued with their munchings. I opened the window and tried to chat, but they would have none of it.
It was not your usual Christmas Day, but one I shall remember for a long time !

Posted by Twilight at Wednesday, December 27, 2006