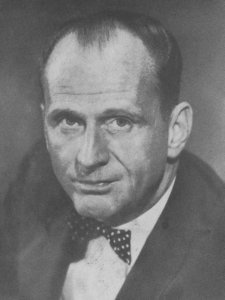 H. Allen Smith, born 19 December 1907, McLeansboro, Illinois. No birth time found.
H(arry) Allen Smith is my second Sagittarian humorist of the Pluto in Gemini era, and the last of my Super Six. Here's another slightly different style of humorous writing. In H. Allen Smith we don't see acid satire, or get the feeling that he wanted to be "one of the elite" that seemed apparent in Parker and Perelman. Nor is there as much social comment as in Sinclair Lewis, and the whimsy of Thurber or Nash is also less evident here. I could whimsically surmise that perhaps Pluto in Gemini's influence has evolved since it's debut with Sinclair Lewis, hitting a kind of crescendo with Parker, Thurber and Nash, calming a little by Perelman and calming even further by H.A.Smith's time when Pluto lies at 23.44 Gemini, in the last third of that sign. There's also the matter of Neptune, this second generational planet had moved from Taurus through Gemini into Cancer over the course of the births of my Super Six. I can "feel" the difference!

The one amazing discovery I made when looking at H.Allen Smith's natal chart was that his Sun in Sagittarius is exactly opposite his Moon in Gemini! Another instance of this aspect in the charts of my Super Six. Ogden Nash, S J Perelman, H Allen Smith all have Sun closely opposing Moon. James Thurber has Sun opposing Neptune, Sinclair Lewis has a Moon Pluto opposition. Smith's Sun and Mercury both lie in Sagittarius, though not close. Venus and Uranus in Capricorn, Mars and Saturn in Pisces, Pluto and Moon in Gemini, Neptune in Cancer, Jupiter in Leo (trine Mercury - good news for a writer?)

I've copied a brief biography from Internet booklist, as information on the personal life of this writer is hard to come by on-line. He wrote his autobiography, "To Hell in a Handbasket" which I intend to seek out on trips to secondhand book stores.

"Harry Allen Smith was born in McLeansboro, Illinois. He left home at fifteen and soon found work as a journalist. At the age of nineteen, while editor of the Sebring, Florida American, he met his lifelong companion, Nelle Mae Simpson, whom he married in Tulsa, Oklahoma in 1927. From 1929 to 1941, Smith worked in New York City, where he became known for his lively interviews with the famous people of the day from Sally Rand to Einstein, and where he made friends with such newspaper legends as Gene Fowler and H. L. Mencken. In 1941 he became nationally known as a humorist with the publication of Low Man on a Totem Pole. After a brief stint in Hollywood, Smith and Nelle settled in Mount Kisco, New York in 1945. In 1967, having fallen in love with the Southwest, they moved to Alpine, Texas, where he wrote The Great Chili Cook-off. H. Allen Smith was still hard at work at "the writin' trade" when he died in San Francisco at the age of 70."

I have his book "We Went Thataway" journal of a trip he made with his wife across the United States (Sagittarius Sun showing itself?) I also have a book of short stories which he edited "Desert Island Decameron", both these are first editions obtained for a few $$ during wanderings among antique and secondhand stores.

Smith's humour is often subtle, reading his work reminds me of listening to a talented raconteur in an English pub telling tales of his exploits, liberally spiced with chuckles and some belly laughs from his audience. He writes in a very conversational style, different from Perelman's offerings which now strike me as being rather pretentious. Perhaps I have evolved since the days when I haunted my local library in the 1950s!

H. Allen Smith does not appear to be of the "Pagliacci" ilk. He seems to have had a happy marriage and generally happy life, as did the other Sagittarian of my Super Six, James Thurber.

There is some evidence to suggest that H. Allen Smith may, in fact, have been born on December 19, 1906. If this the case, how would that affect his astrological reading?

I've looked at the two charts for 19 Dec. 1907 and 1906. The outer planets (Uranus, Neptune, Pluto are in the same signs both years, but in different degrees.

The personal planets, which are most important in personality are quite different, apart from Sun and Mercury - both remain in Sagittarius both years.

The 1906 chart has Venus and Mars in Scorpio, which would bring in more intensity, and maybe a slightly darker, sexier feel than the 1907 chart which had Venus Capricorn, Mars Pisces.

Moon's degree is uncertain in both but 07 was Gemini or possibly very early Cancer. 06 Moon in Aquarius.
Gemini and Aquarius both Air signs, either would fit as much as we know of him. Gemini probably is the better bet for a writer of his style.

On balance I think I prefer the 1907 chart, I don't get the Scorpio feel that 1906 would bring in via Mars and Venus. But then, I don't know enough about his persoanl nature to be sure.

Without an exact time of birth we've no idea of his rising sign which could throw a better light and make the choice of year a little easier. :-)