Our close neighbor Texas will be in the headlines tomorrow, when its population votes, at last, in the presidential primaries. The result, along with those of two other states voting tomorrow, could be decisive in who will be the Democratic nominee.

We live in the part of Oklahoma known as Texhoma, just a 30 minute drive from the Texas border at the Red River. Before I arrived in the USA, I used to say that Texas was my favourite state - from a position of complete ignorance of course. My opinion was based on nothing more than Larry McMurtry novels and the TV series "Dallas". I didn't know, then, how beautiful is Colorado or how magical New Mexico. I do now. Texas still fascinates though - if only for its sheer size. You can drive for hours and see little but scrubland and wide horizons.

So - how will the people of Texas vote in the Democratic primary? Will they favour Hillary Clinton, a voice of change with known history, or Barack Obama, also a voice of change but something of a leap into the unknown? 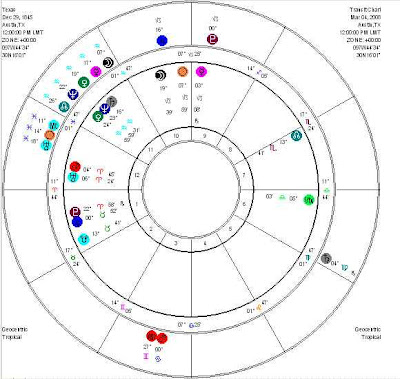 I'm not keen on using charts for anything that's not a living breathing entity, but I'll try the idea for size on this occasion, it might offer up some symbolism at least. On the day Texas became a state the planets lay in a combination of conservative, businesslike Capricorn, forward-looking Aquarius, energetic Aries and one in earthy Taurus. In pioneering 19th century days that combination must have matched the flavour of Texas pretty well. 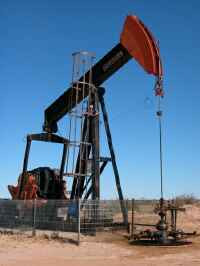 In the transit chart for tomorrow, 4 March 2008, Neptune has returned almost to it's statehood position at 23 Aquarius - it's now at 22 Aquarius. Neptune rules oil, which historically was one of Texas's biggest advantages! I wonder what a Neptune return might signify. Interestingly too, Neptune was discovered on 23 September 1846, nine months after Texas became a state.

In the transit chart for 4 March there are no Aries planets, but 4 in Aquarius and 2 in Capricorn. The transit planets match the Texas base personality fairly well, a blend of the old and the new, but Aries energy found the 19th century chart is replaced by a more laid-back Pisces influence.

A couple of aspects from transit chart to statehood chart stand out. Transiting Mars at 00 Cancer opposes statehood Mercury at 03 Capricorn and Sun at 07 Capricorn, and is square statehood Mars/Uranus in Aries. Perhaps that indicates a rather softer, sensitive feel to voting day Texas?

What the charts indicate to me isn't whether Senator Clinton or Senator Obama will win for the Democrats, but that overall the state is more likely now to favor Democrat over Republican.....that's a wild and unwise prediction about the state which gave us President Bush, a state totally dedicated to owning firearms, relies heavily on oil production, and is generally considered to be a cradle of conservatism.

I dare not hazard a guess about the Clinton or Obama question. Oklahoma preferred Senator Clinton in the Super Tuesday primary, will our close cousins follow its lead, or will they opt for the unknown? In their past they'd have been more inclined to take an impulsive leap in the dark (the Aries influence in the statehood chart), but on 4 March 2008, I'm not so sure.
Posted by Twilight at Monday, March 03, 2008