Ben Webster: Ballads and "The Brute" 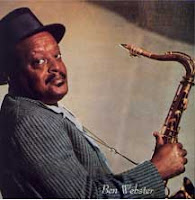 My husband has tried, slowly, to introduce me to jazz. It's a musical genre which had never appealed to me in the slightest, while he has been smitten with it since schooldays. I've found a few pieces which I enjoy, and many which I simply cannot listen to for more than a few seconds. Saxophonist Ben Webster was one of the first artists recommended to me for easy appreciation, I took to his style easily. He played tenor saxophone, and though he often played the wham-bam-thankyou-ma'am-type jazz, from which he earned his nickname "The Brute", his interpretations of ballads were what set him apart. He said in interview:

"I like to play things that people understand, or maybe tunes that they could recognise. And so—I play for the people, just as much as for myself."

Ben Webster has been called "the supreme interpreter of ballads, (he) mastered the art of absorbing a song making it his own without violating its essence."

Listening to Webster playing "My Funny Valentine" or "Someone To Watch Over Me" with such sensitivity, one wouldn't easily guess that he could be quite violent.

"..... under(Duke) Ellington he found his own voice, moving between blustery showboating and breathy romanticism. He played with a distinctive raspy timbre, often spiking his lines with a sensuous vibrato. Webster was also known for being alternately charming or offending (the latter usually linked with his affection for the bottle). Webster stayed with Ellington for three years. He left after he was allowed to play piano with the band one night but overstayed his welcome. Ellington took offense over the incident but refused to discuss it with Webster, who responded by cutting one of the boss's best suits to bits."

"He was a large and occasionally violent man of unusual affections and bizarre impulses. He slept deeply, and had a curious habit of punching anyone who woke him, even his grandmother. In the 1950s, he lived in Los Angeles with his mother and grandmother, the two people in the world closest to him. Jim Hall, the guitarist, once described the routine of picking him up to go to a job. If Webster were asleep, his mother or grandmother would lean over him and say, "Ben, Mr. Hall is here and it's time to go to work." Then they would jump back about two feet to get out of the way. On the other hand, when the name of a dead musician he had loved came up (Tatum, say, or Fats Waller), Webster could be moved to tears. Hall remembered: "He started telling me what Tatum was like -- he loved to talk about the great ones he knew who were gone -- and the next thing I knew, he was crying."

Those brief extracts depict a talented man of sharp contrasts. He was born in Kansas City, Missouri on 27 March 1909. I can find no mention of his time of birth, so used a chart for 12 noon on his birth date. 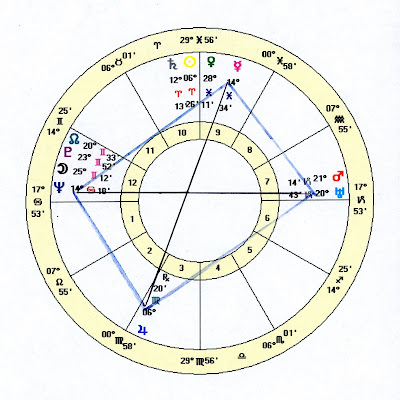 The two factors I see as being most significant here (though there a doubtless many others) are 1) a mystic rectangle configuration (I've marked it on the chart), and 2) the mutual reception between Mars and Saturn.

A mystic rectangle configuration is made up of planets connected by trine or sextile also linked by oppositions, producing a box shape with a diagonal cross inside it. The trines and sextiles harmoniously link the planets and signs involved, the oppositions provide friction - also necessary to stop things from becoming too passive and easy-going.

TheAstrologer.com
:"Someone with a Mystic Rectangle in their chart will feel the effects of four planets working together in a strongly balanced and integrated pattern. This configuration offers the bearer a chance at inner harmony -- if the challenge of those two oppositions can be faced and dealt with consciously".

There's little doubt in my mind that this well integrated set of planets supported Ben Webster's musical talent, the very tight trine between Neptune (creativity) and Mercury(communication) being an important base for the integral pattern. Venus, the musical planet lies in Pisces not far from Mercury and although the planet is not technically part of the mystic rectangle, because Pisces ruler, Neptune is so tightly involved in the configuration, perhaps Venus could be considered an honorary inclusion.

Mutual reception (two planets placed in each other's ruling signs): Mars lies in Capricorn, the rulership of Saturn, Saturn lies in Aries, rulership of Mars. The two planets, aggressive Mars and serious Saturn combine forces in Webster's personality, and have relevance to his violent streak, more especially as Mars lies conjunct rebellious unruly Uranus and is in square (conflicting) aspect to Saturn.