Maxfield Parrish was briefly mentioned in my post relating to the Golden Age of Illustration. He deserves something more.

Parrish, originally set out to become an architect, changed direction, and became one of America's best loved artists. He has been called "Master of Makebelieve", and having looked at some of his work on-line it's easy to see why. Many of his pieces remind me slightly of the paintings of the Pre-Raphaelite Brotherhood in Britain in the 19th century. Their work is rather more sensual, but I felt certain he was influenced by them, and this was confirmed in a brief biography here

"(Parrish)was particularly drawn to such contemporary English artists as the Pre-Raphaelites, Rossetti, and Lord Leighton. Parrish took an immediate interest in Leighton's art, his lifestyle, and this shaped Parrish's artistic vision, and most certainly contributed to the creation of his curious blend of naturalism, fantasy and romanticism."

The painting below is one of Lord Leighton's. 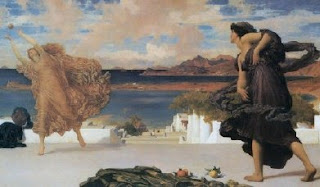 Maxfield Parrish painted serenity, using glowing tones. He achieved the glow by a particular method of applying thin layers of paint and varnish one atop the other. I'd love to see some of the originals, because the computer screen, though a wondrous invention, can only give us a shadow of the real thing. It seems, even from what can be seen on-line that his paintings captured the image of light wonderfully. 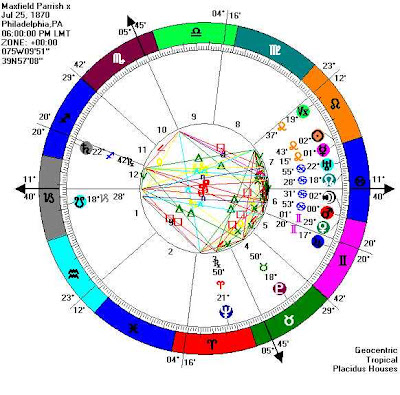 His natal chart shows a clear "funnel" configuration, with Saturn in Sagittarius at the business end. He has been referred to as "A businessman with a brush" as well as "Master of Makebelieve". Capricorn rising (ruled by Saturn) underlines his instinct for business. There's a Yod (two quincunx aspects joined by a sextile) involving sextile aspect between Pluto and Uranus with Saturn at the pointy end of the Yod formation - Saturn in focus on two counts, and his Capricorn ascendant brings in a third.

Neptune (imagination and fantasy) in Aries trines Saturn in Sagittarius and sextiles Venus. Venus Mars and Moon form a stellium, albeit that Venus is in the last degree of Gemini while Moon and Mars are in Cancer. Neptune's harmonious links are reflected in the artist's nickname "Master of Makebelieve".

Parrish's penchant for depicting androgynous figures rather than voluptuous or overtly masculine ones may be symbolised by the grouping of the Moon, Mars and Venus in his natal chart. Masculine Mars sandwiched between feminine Moon and Venus, with just a degree of so between - an androgynous mix!

It's interesting that Parrish's first painting was titled "Moonrise". His Moon at home in Cancer is one of the stronger placements in his chart. Sun at home in Leo is also strongly placed. It seems significant to me that the two celestial bodies which are givers of light, strong in his natal chart, reflect strongly in his paintings which are so universally lauded for their unusually clear depiction of.....light!

The video I've compiled from on-line illustrations of his work can only give an idea of his subject matter, not the glowing brilliance of colour and light for which Maxfield Parrish is so well known:

thanks T, what a lovely gift for a Sunday morning.
Do you by any chance know where he is exhibited?
I love the sensuousness of the fabrics and the light in the bodies.
Wow!
XO
WWW

Hi WWW. Glad you like Parrish. He was unknown to me until I started researching for the blogs.

I haven't found any reference to a permanent exhibition of his work, but I think there are travelling exhibits doing the rounds from time to time. I noticed there's to be one in North Carolina next month. Watching local press and art galleries' adverts is the best plan, I think - that's my intention.